Spoor, Heerink, and Qu, Dragons with Clay Feet? Transition, Sustainable Land Use, and Rural Environment in China and Vietnam, 2007.

Of Dragons and Degradation 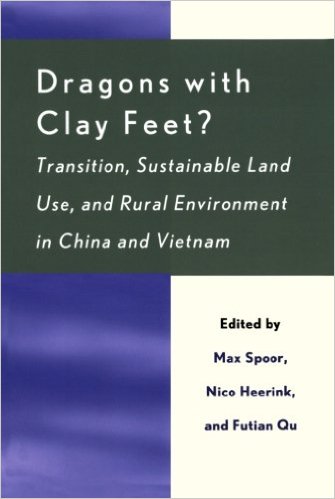 the early 1980s, yet few would deny that their transition from centrally planned to market-oriented economies has also brought intensified environmental degradation. Unfortunately, this volume is not the best place to look to gain a clearer understanding of China and Vietnam's current ecological predicaments. Contrary to what the book's title seems to imply, most of the sixteen chapters concern the effects of economic reform on regional inequality and rural household production decisions.

To be sure, many of the papers excel in their discussion of these important issues, but the natural environment ends up getting short shrift. What is more, the focus is overwhelmingly on China, while Vietnam appears as almost an afterthought. This volume might be of interest to economists of contemporary East Asia and possibly scholars in the larger field of development studies, but specialists in environmental studies will find it less than satisfying.

The book begins with an introductory chapter by Max Spoor, Nico Heerink, and Tianfu Qu that proposes a coherent (albeit rather self-evident) framework for analyzing household responses to economic policies and changing institutions, as well as their implications for agricultural production and sustainable land use. In addition to spurring rapid agricultural growth, the authors make it clear that China and Vietnam's recent economic and institutional reforms have contributed to land degradation problems like water and soil pollution, erosion, salinization, and reduced soil organic matter content.

Most official policies addressing these environmental problems, as the authors rightly point out, have "a strong top-down character" (p. 41), relying on direct regulation and state-mandated technological improvements. But since economic reforms have given rural households a greater leeway in deciding how to use resources, the authors call for greater attention to the use of economic incentives (taxes and subsidies) and institutional reforms (more secure property rights) to influence household behaviors and promote sustainable resource use.

Rather than seeking to flesh out these insights, the papers that follow the introduction do not actually apply Spoor, Heerink, and Qu's analytical framework. Most of the chapters concern the sectoral impacts of economic reforms and their effects on household decisions, but devote little attention to their environmental consequences. The editors recognize that access to and degradation of natural resources "have become crucially interlinked with income differentiation, marginalization, and poverty"

2). Unfortunately, none of the papers engage with these linkages. As a result, the authors pass up an opportunity to shed light on debates surrounding the relationship between poverty and environmental degradation.

The few chapters that seriously engage with the environmental consequences of economic development in China and Vietnam focus exclusively on agriculture, neglecting other important forms of resource use. Funing Zhong, for example, claims that agricultural diversification has reduced stress on China's environment by limiting the conversion of land to grain production, but fails to examine its impact on water fisheries, forestry, and animal husbandry or locate this in China's overall political economy. This omission is surprising because Spoor, Heerink, and Qu make explicit reference to deforestation and desertification caused by overgrazing in their opening survey of China and Vietnam's contemporary environmental problems. Obviously, a thorough analysis of "sustainable resource" and the "rural environment" requires a wider focus that takes account of these and other sources of ecological transformation.

Despite these limitations, the papers make a useful contribution in their discussion of the ecological impact of systems of intensive rice production that have fueled China and Vietnam's agricultural growth. With the high pressure on land resources in China and Vietnam, most production growth has resulted from increased yields gained through the adoption of high yield varieties and intensified application of chemical fertilizers and other complementary inputs. In the only paper on Vietnam's environment, Nguyen Huu Dung and Max Spoor show that while intensive rice cultivation has increased production and incomes, widespread use of agrochemicals has had negative effects on Vietnamese farmers' health due to pesticide exposure.

Herman van Keulen describes the serious threats that limited water supplies, nutrient depletion, and increasingly resistant weeds and pathogens pose to the sustainability of intensive rice monocultures throughout East Asia. Anyone with even a cursory knowledge of China's environmental history, however, would question van Keulen's assertion that traditional systems of rice cultivation "remained unchanged for thousands of years" and were "grown for millennia in monoculture without major soil degradation" (pp. 265-266). This interpretation is tenable only if rice paddies are viewed in isolation from the ecological costs of water control systems and the agricultural commercialization that contributed to habit destruction and human-induced species extinctions in late imperial China. [1]The policies that the various contributors propose for dealing with the current environmental problems posed by intensive rice cultivation stress the importance of government investment in rural public goods. Jing Zhu and Yousheng Li, for instance, argue that insufficient public input has made it necessary for China's farmers to rely on private materials (i.e. chemical fertilizers and pesticides) that pose a threat to the natural environment. In their view, increased public investments in agricultural research and infrastructure would increase productivity, thereby reducing the application chemical fertilizers and pesticides. Merritt van den Berg, Guanghe Wang, and Reimund Roetter likewise point to the large potential gains in fertilizer efficiency that could be obtained from greater government investment in agricultural research and extension services.

As the book shows, another major consequence of China's rapid economic growth and urbanization since the 1980s has been the encroachment of built-up land on China's already-limited farm acreage. This trend has only accelerated in recent years, arousing concerns about China's ability to maintain food self-sufficiency. Changhe Lu, Xiubin Li, and Minghong Tan conclude that lack of cultivable land available for reclamation will make the Chinese government's official goal of balancing farmland losses and gains unattainable, particularly in coastal areas. As an alternative, they advocate a tax on farmland conversion that could be used for public investments to improve the land use efficiency through irrigation, terracing, and the alleviation of land degradation.

One of the things that sets Lu, Li, and Tan's paper apart from the other papers is that it traces historical changes in China's farmland use, if only back to 1949. In contrast, most of the papers take the late 1970s as the baseline for their analysis. The obvious problem is that degradation of land, forest, and water resources was apparent in many regions of China long before the onset of economic reform.[2] Since the authors implicitly downplay the massive ecological problems that had already emerged prior to the reform period, they tell us little about the underlying causes of environmental degradation. Making sense of "unsustainable" agricultural growth, in other words, requires far more historical perspective than this volume provides.

Although _Dragons with Clay Feet_ is an earnest attempt to address the relationship between economic reform, household decisions, and ecological degradation in China and Vietnam, it falls short of these grand ambitions. Readers seeking to understand the complexities of these countries' environmental problems should look elsewhere.