The President explained that National Security Adviser Henry Kissinger had been meeting with Chinese Premier Zhou Enlai and that it had been agreed that the President would now go to China.
July 15, 1971
Print

President Richard Nixon announced that he would visit China from a NBC television studio in Burbank, California.

I have requested this television time tonight to announce a major development in our efforts to build a lasting peace in the world.

As I have pointed out on a number of occasions over the past three years, there can be no stable and enduring peace without the participation of the People's Republic of China and its 750 million people.

That is why I have undertaken initiatives in several areas to open the door for more normal relations between our two countries.

In pursuance of that goal, I sent Dr. Kissinger, my Assistant for National Security Affairs, to Peking during his recent world trip for the purpose of having talks with Premier Chou En-lai.

The announcement I shall now read is being issued simultaneously in Peking and in the United States:

The meeting between the leaders of China and the United States is to seek the normalization of relations between the two countries and also to exchange views on questions of concern to the two sides.

*******************
In anticipation of the inevitable speculation which will follow this announcement, I want to put our policy in the clearest possible context.

Our action in seeking a new relationship with the People's Republic of China will not be at the expense of our old friends.
It is not directed against any other nation.

We seek friendly relations with all nations.

Any nation can be our friend without being any other nation's enemy.

I have taken this action because of my profound conviction that all nations will gain from a reduction of tensions and a better relationship between the United States and the People's Republic of China.

It is in this spirit that I will undertake what I deeply hope will become a journey for peace, not just for our generation but for future generations on this earth we share together. 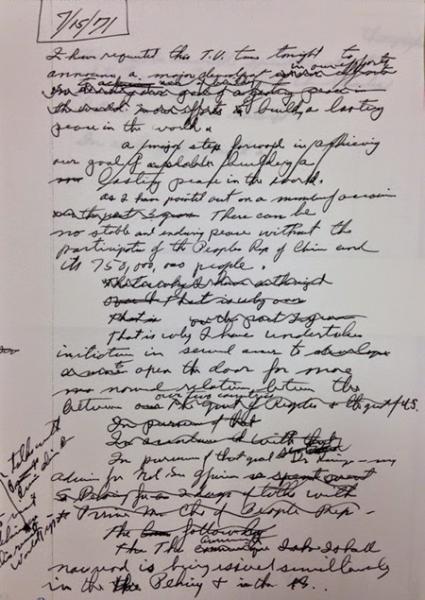