Radchenko, Unwanted Visionaries -- The Soviet Failure in Asia at the End of the Cold War (January 1, 2013)

As a country whose considerable landmass spans both continents, Russia has long been a geopolitical entity with an Asian as well as European 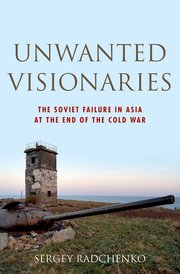 outlook and influence. Today, tensions between Russia and China persist over increased Chinese economic activity in Siberia, and the Kremlin has shifted Russia's naval posture to a Pacific orientation. At the same time, however, the Kremlin seeks to secure its position in Europe through support for antigovernment fighters in the Ukrainian conflict and increasing pressure on North Atlantic Treaty Organization (NATO) member states. At the end of the Cold War, too, Soviet leader Mikhail Gorbachev sought to secure his declining state's position in both Europe and Asia. The former, particularly regarding the events surrounding the fall of the Berlin Wall, has received considerable treatment in the burgeoning historiography of the end of the Cold War. The latter, Asian material remains relatively absent in the historiography.

Enter Sergey Radchenko and his masterful Unwanted Visionaries. Radchenko chronicles the Asian foreign policy of Gorbachev, who "looked East with anticipation unseen since the great Asian love affair of Nikita Khrushchev" (p. 2). Beginning with Leonid Brezhnev's overture to the People's Republic of China (PRC) in Tashkent, Uzbekistan, on March 23, 1983, and concluding with the final disintegration of the Soviet Union, Radchenko chronicles the successes and (more frequently, as the title indicates) failures of Soviet leaders' efforts to pivot toward Asia. An assessment of Radchenko's work must begin with a note on research. Radchenko has consulted Soviet sources from the central archives in Moscow as well as regional archives in Sakhalin, Chinese regional archives bordering the Soviet Union, Cambodian materials held in France, and the Mongolian Foreign Ministry Archives, along with materials from the United States, the United Nations, and Germany. This impressive breadth of archival research, ably employed by the author to tell a compelling and important story, makes Unwanted Visionaries an exemplary and accessible work of international history.

The core of Gorbachev's vision for Asia, Radchenko argues, was a strategic triangle with India and the PRC to lead a broader Asian collective security initiative. At Konstantin Chernenko's funeral, Gorbachev first met with Rajiv Gandhi, the Indian prime minister, and Li Peng, the Chinese vice-premier, much to the consternation of the assembled heads of state and government waiting to meet the young new Soviet leader. Gorbachev believed the Soviet Union could supplant the United States as India's main source of high technology. India--"caught up between the hammer of US strategic interests and the sickle of Soviet efforts 'to save [it] from the arms of the imperialists'"--would have been a valuable ally for the Kremlin in expanding Soviet influence in Asia (p. 90). Gorbachev's overtures to India were undone by another priority: to extricate the Soviet Union from its war in Afghanistan, which Gorbachev and his circle knew to be quixotic, the Kremlin had to improve relations with Pakistan to ensure as dignified a withdrawal as possible--meanwhile Gandhi hoped to improve India's regional position at Pakistan's expense and with Soviet military and economic aid. The two policies could not coexist, and the enthusiasm for Indo-Soviet relations of the mid-1980s had all but disappeared by 1990.

The bulk of Radchenko's monograph details Soviet relations with the PRC and Japan, similarly styled policies with very different outcomes. One of Gorbachev's main foreign policy successes, Radchenko asserts, was his normalization of Sino-Soviet relations. Rapprochement with Beijing began under Brezhnev and continued during the tenures of Yuri Andropov and Chernenko. It was not until Gorbachev came to power, however, that the process could be successfully concluded. The two states' mistrust coupled with Chinese leader Deng Xiaopeng's "three obstacles"--the Soviet invasion of Afghanistan, Soviet support for Vietnam's occupation of Cambodia, and Sino-Soviet border disputes--made the process of rapprochement a difficult one. The younger Gorbachev, unlike his predecessors in the Kremlin's highest office, did not take the PRC for granted; he and his advisors recognized that the PRC was only getting stronger, while their own position was in decline. Treating Chinese leaders as equals in the lead-up to and during the Gorbachev-Deng summit of May 18, 1989, cemented the relationship's improvement, as did Gorbachev's silence on the Tiananmen Square massacre.

Gorbachev's failure to mend relations with Japan, on the other hand, constituted his most critical foreign policy failure according to Radchenko. Though elements in both Moscow and Tokyo favored amelioration, significant opposition (mostly resulting from the territorial dispute over the Kuril Islands, known in Japanese as the Northern Territories) made showing flexibility impossible. Gorbachev desperately needed Japanese capital to shore up the foundering Soviet economy, and planned to use Asian foreign direct investment in the Soviet far east to jump-start its economic development, but none would be forthcoming unless Moscow made concessions on the territorial dispute. Ultimately, events in Europe constrained Gorbachev's freedom of action: the fall of the Berlin Wall led Eastern Europe and the Baltic states to leave the Soviet fold, after which Gorbachev could scarcely afford to be seen "selling" the Kuril Islands to the Japanese.

Two other chapters chronicle the evolution of Soviet relations with Vietnam, primarily regarding the Vietnamese military misadventure in Cambodia, and the two warring halves of the Korean peninsula. Radchenko demonstrates the breadth of Soviet engagement with Asia under Gorbachev, but it is clear throughout that Moscow's interest in playing a leadership role was not reciprocated by the Asian states themselves. The picture of Gorbachev that emerges is of a leader haphazardly responding to a multitude of external stimuli. Radchenko delineates his chapters by country, which can obscure the extent to which the Kremlin had to address the breadth of issues addressed in his book concurrently--plus events unfolding in Europe and the superpower relationship. Gorbachev also had to confront the internal tensions between "Gorbachev the ideologue and Gorbachev the statesman" (p. 164). While his heart may have been with the protestors in Tiananmen Square, for example, rapprochement with the PRC proved too strategically important to risk over a matter of principle. Foreign policymaking in Gorbachev's Kremlin was a balancing act, and the general secretary frequently stumbled. Radchenko does a commendable job of describing the internal politicking that went into foreign policy, from the back-channel efforts of Liberal Democratic Party leader Ichiro Ozawa and intransigent conservatism of the foreign ministry in Japan to the ideological (and power) disputes regarding Moscow's approach to the PRC within the Kremlin.

At the risk of delving too deeply into semantics, one wonders to what extent the Soviets can rightly be called "visionaries"--with the word's connotations of new and innovative thinking--given the evidence Radchenko presents. Like the Soviet leaders before him, and the tsars before them, Gorbachev viewed Asia primarily as an arena of competition for global influence. Asia was a means of shoring up Russian standing in Europe, and vice versa. He certainly demonstrated new thinking, such as his unique willingness to treat the PRC as an equal. But like his predecessors, Radchenko demonstrates, Gorbachev saw the states of Asia as entities to be acted upon, allies whose value was not so much intrinsic as in the global clout they would contribute to the Soviet Union vis-à-vis the United States and others. This might have borne fruit had the Soviet Union anything to offer them, but the underdevelopment of Soviet Asia was a stark contrast to the neon lights of Tokyo or Seoul.

Unwanted Visionaries is a major contribution to our understanding of how and why the global Cold War came to a conclusion. That story has generally been the province of scholars with a European or US focus, but Radchenko breaks new ground in showing how the Cold War ended in Asia, and the role of the Soviet Union in that complex process. It is rigorously researched and engagingly written, and will appeal to scholars of diplomatic, Asian, and Soviet history, as well as a general readership seeking to better understand the complexities of international relations in Asia today and the historical causes thereof.