Perhaps Unwritten, But Not Unknown

The subtitle of this excellent volume is understandably inexact. While the topics included here are relatively unknown in the world of published 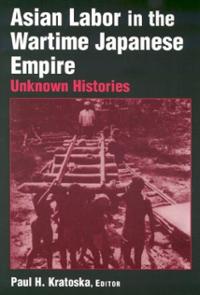 material in English, they are often well represented in Asian popular memory. Their compiling here nevertheless serves two important purposes: introducing this aspect of the Japanese empire to those who do not know of it, and contributing to an academic paper trail on wartime Japanese endeavors. As a result, this is not simply an informative volume, but a timely one, for many and continuing are the efforts of Asians seeking redress from the Japanese government. Unfortunately, they do not have much time remaining.

The back cover includes high praise from Mark Peattie, one of the most senior figures in the study of the Japanese empire. He deems the volume "a landmark work." This is likely the case, for while much has been written on Japanese occupation policies, labor studies are relatively few and scattered. Indeed, this may well be, as Peattie notes, "[t]he first study to look at Japanese labor policies comparatively across all the occupied territories of Asia during the war years."

For this effort, Paul Kratoska is to be congratulated--he has brought sixteen scholars of Japan, China, Korea, and Southeast Asia together and successfully coordinated a cohesive volume that compares most of the wartime Japanese empire. Even if not comprehensive--China south of the Great Wall is not represented--it is certainly wide-ranging. The definition of labor is similarly broad, including not only factory and other workers, but also soldiers and women mobilized outside the traditional labor sectors.

Kratoska leads off the collection with an essay on issues involved in labor mobilization across the empire, exploring general labor needs and policy initiatives. He notes that while many Japanese were motivated to enlist and serve, other Asians were less motivated by the promise of "co-prosperity." As a result, Japanese officials were compelled to turn to both lures and more draconian methods in order to deal with labor shortages. Given that "[o]n balance the Japanese handled the situation very inefficiently," the stage was set for widespread suffering (pp. 20-21).

Subsequent chapters consider specific regions and their particularities. David Tucker ably surveys labor policies in Manchukuo, while identifying what "coolie" labor came to mean there. He also demonstrates the contradictions inherent in Japanese labor policies, for the expanding war hampered recruitment, requiring Japanese to resort increasingly to compulsory practices. Moreover, since forced labor too had to be recruited, transported, and fed, it was expensive, further undermining Japanese efforts. Ju Zhifen's ensuing essay on the mobilization of laborers in northern China usefully follows up on Tucker's, revealing some of the difficulties encountered there in recruiting labor for Manchukuo, Japan, and elsewhere.

The remaining chapters can be placed in three groups. One includes outright Japanese colonies. Two short chapters by Utsumi Aiko and Naitou Hisako address issues in Korea--Utsumi on Korean soldiers in the Imperial Japanese Army and Naitou on Korean laborers. Both paint their subjects broadly and hint at work currently ongoing in Korea examining these topics. Hui-yu Caroline Ts'ai's chapter on Taiwan goes into greater detail, analyzing the Taiwanese experience in some comparison with Korea.

The second group includes chapters exploring those places Japanese troops only occupied during the Asia-Pacific War. Five consider Indonesia, two Malaya, and one each the Philippines and Vietnam. While Kaori Maekawa addresses the recruitment and duties of Indonesian auxiliary soldiers, all but one of the others focus on the recruitment and conditions of laborers, or "economic soldiers" as noted in Shigeru Sato's piece. For them, Sato observes, "the co-prosperity sphere was a co-misery sphere" (p. 151). Indeed, all of these essays describe well the misery and devastation that generally accompanied Japanese rule in Southeast Asia. Hundreds of thousands from what became Indonesia died, shipped out for labor service across the region. Food shortages occurred in Malaya and the Philippines, famine in Vietnam and in parts of the Dutch East Indies.[1] In all, grandiose Japanese plans ran aground upon the rocks of local realities and the exigencies of war.

Two chapters in this section--as well as one in the third--consider railway construction projects. This is useful, for the Japanese endeavored to build more than just the infamous Thailand-Burma Railway during the war. Railway construction was indicative of broader Japanese ambitions--not only in the promotion of the war effort, but also in the service of an idealized and more integrated East Asian order. Harry Poeze and Nakahara Michiko, however, show that Japanese methods to achieve those goals were far from ideal. They were in fact brutal and callous, and Poeze notes that they contributed instead to the creation of anti-colonial guerrillas. Together, these chapters show that even one of the aspects of empire that some Japanese view as progressive should instead be regarded as highly problematic.

In Vietnam, the Japanese purposefully cultivated an anti-colonial force, for the Japanese mobilized and armed Cao Dai and Hoa Hao adherents as part of their March 9, 1945 takeover. Tran My-Van's chapter, however, reveals that the Japanese did not do well by their allies, for the ensuing famine in the north and the general unpopularity of their regime resulted in a nationalistic backlash against the Cao Dai and the Hoa Hao.

The final group consists of two chapters in a section entitled "Memory and Reconciliation." Chin-Sung Chung's penultimate chapter on "sexual slavery" in Japan considers the problem of the so-called comfort women across the empire, tracing its origins to 1937 and its gradual expansion into recruitment in Korea and Taiwan. Chung explores not only historical events, but also the continuing efforts to seek redress in Japan, indicating well the contemporary significance of all the essays in this volume.

Bruce Reynolds' final chapter on the Thailand-Burma Railway is similar, for not only does he establish that the labor recruited for the railway was from across Asia, but also that disdainful Japanese attitudes towards their "fellow Asians" was part of the problem, both then and now. Current issues are evident in a short discussion noting that while some Japanese have endeavored to atone for wartime activities, others make that work problematic. This said, Reynolds concludes with three important general observations about contemporary debates. One is that Japanese did pay for their wrongs to some extent--in casualties, in postwar executions, and in the devastation of their empire. Second, the postwar international order enabled, if not encouraged, Japanese to disregard their wartime record. There is more to the story of presumed Japanese evasiveness, and readers are reminded that the deeds and atrocities documented here did not fade only because of the actions and omissions of postwar Japanese.[2] Third, Reynolds gently cautions readers that "remembrance of past evils is a double-edged sword. Obsession with past wrongs can make it difficult, if not impossible, to move beyond and transcend them" (p. 347). While pushing the Japanese government to apologize and make reparations may be productive, the manner of that pushing may be counter-productive.

Taken together, these two chapters provide a fitting conclusion to the volume, for in addressing contemporary perspectives they show that the issues discussed throughout the volume remain alive. Although some Japanese would obviously prefer that these issues remain "unknown," it is apparent to not only many foreign observers but also to many Japanese that dealing with this questionable past would be more productive than simply ignoring it.[3]

This volume would make an excellent acquisition for university libraries. It is thematically coherent and individual chapters provide a variety of regionally focused material useful for a broad range of student essays. Naturally, there is some variation apparent in these seventeen chapters. While some vary in focus (i.e., laborers, soldiers, women), others vary in approach (i.e., policy and statistical surveys versus more subjective modes of inquiry). Essays also differ in their sources--most use Japanese sources, but not all. These differences, however, should not be deemed a sign of weakness, for they suggest that this volume only scratches the surface and that there is great potential for this material.

In the introduction, Kratoska includes a short discussion of the Indian Pioneer Corps, an organization that included many Nepalis. This seems an odd inclusion, explainable perhaps that by acknowledging the wartime recruitment of Asian labor by Allied forces the editor is attempting to provide something of a balanced perspective. It is hoped, however, that this is not a one-off but may be the beginning of a future project, for the sketchy synopsis here begs for detail. How were these people recruited, treated, and compensated, and how have memories of them fared?

[1]. A good discussion of these tragedies is Paul H. Kratoska, ed., Food Supplies and the Japanese Occupation in South-East Asia: Studies in the Economies of East and South-East Asia (New York: St. Martin's Press, 1998. (It is worth noting that Kratoska has recently written or edited more than a half-dozen published works having to do with the war in Southeast Asia, an active research profile indeed.)

[2]. Perhaps the most well-known account of this dynamic in English is Sheldon H. Harris, Factories of Death: Japanese Biological Warfare, 1932-1945, and the American Cover-Up (rev. ed., New York: Routledge, 2002)

[3]. My own thoughts on shifting Japanese perspectives of Manchuria and the creation of postwar Japanese identities can be found in Bill Sewell, "Postwar Japan and Manchuria," in Japan at the Millennium: Joining Past and Future, ed. David W. Edgington (Vancouver: University of British Columbia Press, 2003), pp. 97-119.