Olson, An Ethnohistorical Dictionary of China, 1998

An Ethnohistorical Dictionary of China

This is a welcome initiative: there has long existed a need for comprehensive guides in English to the virtual maze 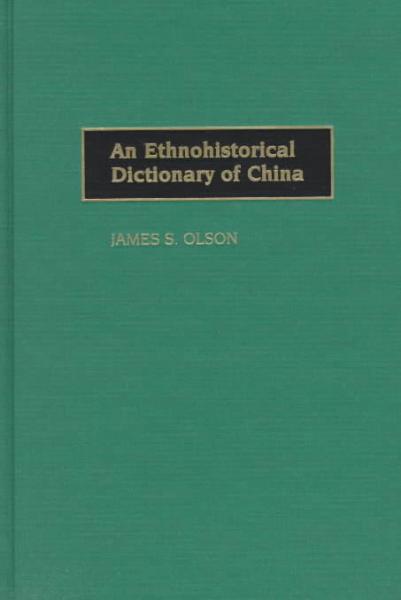 of ethnonyms in use in the Chinese realm in the present, as well as historically. The book lists a large number of ethnonyms from all of China's ethnic frontiers and sometimes beyond, including even parts of Central Asia, with a number of small ethnic groups that might also be represented within China's current borders. The author also has made an attempt to acknowledge hidden dimensions within the official Han Chinese "nationality," and thus includes separate entries for various "regionalect" speakers (Gan, Xiang, Min and so forth), as well as for the Hakka, the Muslim Chinese (Hui), and so forth.

Unfortunately, this work is a prematurely released product which cannot be recommended for use or purchase. On the most basic level, users get no hint as to what principles govern spelling preferences or choice of transcription system for the dictionary entries. The system currently used in mainland China, pinyin, seems to dominate by default, so that cross-references often (but not always) lead to an entry under the current official Chinese term in its pinyin transcription, but with no information of the linguistic origin of the listed ethnonyms to indicate which are sinicizations and which derive from indigenous non-sinitic languages. Appendix A, which lists the 56 officially recognized "nationalities" in China, is also an unexplained mix of names in different languages and spellings.

But what is more serious is the overall failure--despite the hope held out by the title--to link the hundreds of ethnonyms listed in the dictionary with their historical use context: Which are autonyms and which are exonyms--who use what names for whom? Which are pejorative terms? What is the timeframe--are they current, or historical? When such context is ignored, we miss more than half the story: the result is an illusory separation from those historical processes of ethnogenesis and social transformations at work on China's ethnic frontiers which are from time to time tentatively mentioned in the book. In most cases, what we find is not a historical guide to ethnonym use but a facile and misleading enumeration of groups and subgroups, paired with a brief rehearsal of the Chinese evolutionist history of the corresponding official post-1949 Chinese "nationality."

Take, for example, the curious mix of fact and hearsay in the entry for the Northern Mon-Khmer speaking Wa people, which includes a list of names mixing old and modern Wa, Shan, and Chinese names that actually have the same referent (as if listing the "English" and the "Anglais," for example, as separate peoples!); alternative spellings; and a variety of autonyms. Sometimes entries are all of the above. Left undecoded, they cause minor disasters: Thus the entry for "Da Ka Va" mistakenly present this as a subgroup somewhere, currently in the process of coming to regard themselves as belonging under the main entry (which just happens to be the official Chinese "nationality," Wa), but without having quite reached this goal yet (this mantra-like interpretation is repeated almost literally throughout the body of the dictionary, for all kinds of real or imagined peoples in quite different contexts). Actually, "Va" here corresponds to the compiler's Chinese spelling, "Wa;" but "Ka" is the famous and widely used Tai word for "slave" which has been used historically to refer to many of the upland neighbors of Tai speakers, but not in their autonyms; and "Da" is simply Chinese for "Big," used prior to the 1950s to refer to those Wa that were historically more independent--thus the now-defunct, Chinese-language (but partially Tai-derived) term "Da Ka Va" (or, "Da Kawa") for certain Wa people. But the uninitiated reader consulting this book is left to believe that all the subgroup terms must have separate living groups of people as their referents. The confusion also entails waste of precious space, when vague notes on the presence of "thirteenth-century slash-and-burn techniques" [sic] and the like is unnecessarily and even deceptively duplicated (as in the very first entry of the book, for the "A Wa," presumably only because the author imagines that such must have been the case. Using this logic, the "Wild Wa" (the 19th- and early 20th-century English-language name for the so-called "Da Ka Va") might also have been included as yet another separate "subgroup," complete with mechanically tagged-on data on its lifeways. These dictionary entries are piled up like unopened packages, with arbitrary labels left on.

Readers aren't even informed of such basics that modern Chinese zu translates into [officially recognized] "nationality" in today's China, instead zu appears only as an unexplained suffix tagged on to some ethnonyms, as with min and ren (for unrecognized "people"); similarly, we do not learn that man and yi are also ubiquitous Classical Chinese terms for "barbarians." In short, there is little indication of how ethnonyms past and present have been used within ethnonymic systems, and little or nothing on their history. Co-author Tracy Steele's essay on the history of the Han Chinese "nationality" (e.g., in other words, of China and of the history of the Chinese state!) (listed under "Han," pp. 94-135) does make brief mention of the old Chinese conceptions of the civilized and the barbarian, of the assimilation of barbarians and dynastic collapse under barbarian pressure, and of events like the 1950s grand project of determining the ethnicities that would receive official status in the new state. However, the connection between this history and the ethnicities of China is absent, and this is the missing link here: The ethnonyms themselves indeed need to be understood historically, or we end up seriously confusing signs and referents (even in the short space of a dictionary entry!).

The vast majority of output of ethnographic and historical writings on Chinese ethnohistory (regardless of how "China" is defined) is, obviously, in Chinese, but here the bibliographical references are limited to those in English. English-speaking Latin America scholars could not afford not to read Spanish; similarly, some knowledge of Chinese is a sine qua non for any scholar who wants to study almost any aspect of what is contained in this dictionary--but it does not even list the Chinese characters for the ethnonyms. Basic Chinese bibliographical tools and Chinese-language counterparts to this volume (dictionaries, linguistic guides, and encyclopaedias like the "Nationalities" [Minzu] volume of the Zhongguo da baike congshu) should have been listed, providing a minimum of cross-reference--but not even a single Chinese title is included! Even the English-language selection leaves out basic works. The relevant volumes of the Encyclopaedia of World Cultures (D. Levinson, ed., 1991-1996; which is probably where teachers should first send students in search of basic data since it is more generous with its assumptions and the contextual information), have been used for many of the individual entries, but they are acknowledged only in the text and omitted in the bibliography. The same goes for recent highly relevant studies like Cultural Encounters on China's Ethnic Frontiers (Stevan Harrell, ed. 1995), mentioned once by Steele; and Negotiating Ethnicities in China and Taiwan (Melissa Brown, ed. 1996), which is missing altogether; earlier articles by Gregory Guldin are mentioned, but not his more recent and useful work The Saga of Anthropology in China, 1994).

Minor factual and typographical errors occur throughout. The population of the "Bouyei" (e.g. pinyin "Buyi") is under three million, not twenty-five million as the appendix with population figures says. The chronology of Chinese history includes inventions like "the Northern and Southern dynasty," oddities like the failure to connect the Mongols with the Yuan dynasty and the confusing entry "1886: Burma ceases to become a Chinese tributary state"--unfortunate poor editing which will be especially frustrating for non-specialists and students. The exorbitant price puts this out of reach for most, and despite the large number of "facts" listed, it is difficult to recommend this dictionary, which above all serves as an illustration of how much work remains to be done.