These are the prepared remarks from Amb. (Ret.) Nicholas Burns at the start of his testimony before the U.S. Senate Committee on Foreign Relations. In December 2021, Burns was confirmed as ambassador to China by a 76-18-7 vote.
October 20, 2021
Print 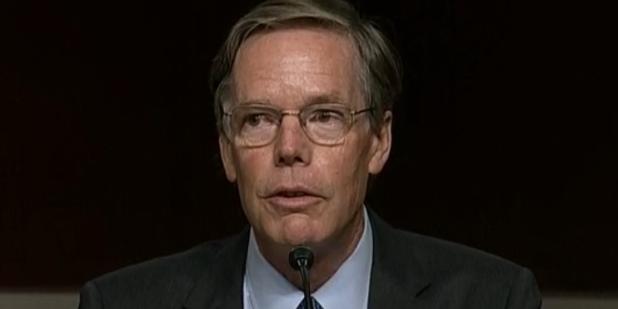 Mr. Chairman, Ranking Member Risch and members of the Committee, thank you for this opportunity.

I am grateful to President Biden for this nomination to be the next Ambassador to the People’s Republic of China.

I owe profound thanks to my wife, Libby, who is here with me today. Together, we have served the U.S. government overseas in Mauritania, Egypt, Israel, Greece, and Belgium. I am also grateful for the support of our three daughters, our son-in-law, and our grandchildren.

If confirmed, I look forward to returning to public service and the State Department, where I have spent the bulk of my career in Administrations of both parties. I would be honored to lead our team at the U.S. Mission in China, which is on the front lines of this complicated and consequential relationship.

As Secretary Blinken said in March, the United States’ relationship with the People’s Republic of China is “the biggest geopolitical test of the 21st century.”

We will compete—and compete vigorously—with the PRC where we should, including on jobs and the economy, critical infrastructure, and emerging technologies. As President Biden has said, when the United States competes on a level playing field, “there’s no country on Earth... that can match us.”

We will cooperate with the PRC where it is in our interest, including on climate change, counter-narcotics, global health, and nonproliferation. The world cannot solve the climate crisis unless the PRC does more to reduce their emissions. And it is to our benefit to maintain engagement between our people, including students, scholars, diplomats, and journalists—so long as America’s laws are respected.

Finally, and crucially, we will challenge the PRC where we must, including when Beijing takes actions that run counter to America’s values and interests; threaten the security of the United States or our allies and partners; or undermine the rules-based international order.

The PRC seeks to become the most powerful military, economic, and political actor in the Indo-Pacific. We must stand with our allies and partners to uphold a free and open Indo-Pacific—including by maintaining America’s commercial and military superiority in 21st century technologies.

We also must hold the PRC accountable for failing to play by the rules on trade and investment, including its thefts of intellectual property, use of state subsidies, dumping of goods, and unfair labor practices. These actions harm American workers and businesses.

Beijing has been an aggressor against India along their Himalayan border; against Vietnam, the Philippines, and others in the South China Sea; against Japan in the East China Sea; and has launched an intimidation campaign against Australia and Lithuania.

The PRC’s genocide in Xinjiang and abuses in Tibet, its smothering of Hong Kong’s autonomy and freedoms, and its bullying of Taiwan are unjust, and must stop.

Beijing’s recent actions against Taiwan are especially objectionable. The United States is right to continue to adhere to its one-China policy. We are also right to support the peaceful resolution of disputes, and to oppose unilateral actions that undermine the status quo and stability in the Indo-Pacific.

The Administration and Congress should help Taiwan “to maintain a sufficient self-defense capability,” as the Taiwan Relations Act clearly states.

The Biden Administration is right to seek effective channels of communication with Beijing to manage our competition responsibly, to diminish the risk of an accidental conflict and, above all, to maintain peace.

The United States must proceed from a position of strength and pursue intense diplomacy—with the People’s Republic of China, and with our allies and partners in the Indo-Pacific, Europe, and around the world. Our alliances and partnerships are a unique comparative advantage for the United States.

As in all things, the United States will lead with our values—democracy and free expression, free press and free enterprise, support for human rights and human dignity. These are at the center of the Biden Administration’s foreign policy.

Beijing proclaims that the “East is Rising and the West is in Decline.” I am confident in our country, and believe that, together with our allies and partners, we will prove them wrong.

That will require alignment in Washington. The bipartisan Senate passage of the Innovation and Competition Act earlier this year is a wise investment in America’s future.

Finally, it is important to keep our rivalry with Beijing in perspective.

The PRC is not an Olympian power. While the PRC has many strengths, it also faces substantial demographic, economic, and political challenges.

We should have confidence in our own strengths—our scientific and technological capacities, world-class universities and research institutions, our military power, our first-rate diplomatic corps across both the Foreign Service and civil service, and, especially, our values that stand in brilliant opposition to Beijing’s actions. We will succeed if we build our diplomacy around these strengths and remain optimistic about America’s future.

If confirmed, I look forward to working with the members of the Senate to pursue such a strategy that will protect and advance American interests in our relationship with the PRC.