Neil Gregory, ed, New Industries from New Places: The Emergence of the Software and Hardware Industries in China and India, 2009

Industrial Locations in India and China

The book "New Industries from New Places: The Emergence of the Software and Hardware Industries in China and India" focuses on the 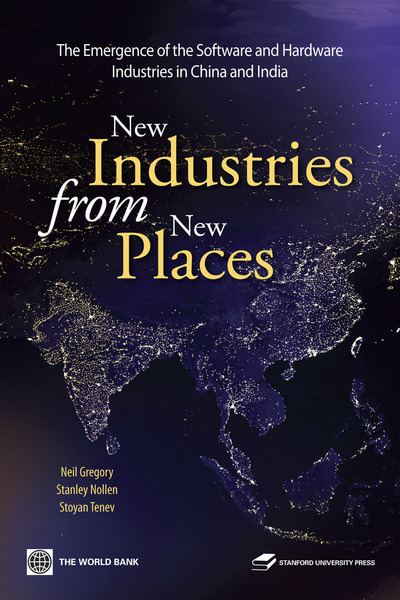 evolution of hardware and software industries in India and China. The book is divided into four parts. Part 1 provides the rationale for the study and a framework for understanding differences in industry performance in these two countries. Parts 2 and 3 follow the same structure with five chapters each for software and then hardware sectors. The five chapters for each of these sectors form the core of the analytical content presented in this book. These chapters provide a China-India comparative perspective on industry performance, factors of production, the role of management, the effect of the business environment and competition, and a summary of factors behind the success of these sectors in the two countries. Part 4 concludes with two chapters. One chapter focuses on different paths of development of hardware and software industries in the two countries and the final chapter sheds light on emerging trends in these sectors.

The authors argue the importance of understanding the relationship between technological change and economic development during an era of economic reforms in India and China. The examination of the effects of differential technological change in these two related industries illustrates the success of Indian software and Chinese hardware sectors. Data from World Bank Investment Climate Assessment surveys and direct surveys of managers in China and India by International Finance Corporation are used. Chapter 1 provides a detailed description of the sample and sampling procedures and a discussion of the variables (e.g., firm characteristics). Chapter 2 offers a brief discussion of the conceptual framework--factors of production (labor, capital, land, intermediate inputs), management processes (quality, corporate culture, technology, international alliances), business environment (market competitiveness, institutions and infrastructure, government policy), and demand.

These determinants are used to analyze the growth and development of firms in the hardware and software sectors. The legacy of the investment climate is discussed in the next chapter. China's dependence on foreign direct investment, India's limited integration in global supply chains, and the scope of the private sector or domestic private investment are the topics covered in this chapter.

The section on software industry (part 2 with five chapters) answers the following questions (p. 131): Why did the Indian software industry grow so fast as an export-oriented industry, and why did the equally fast-growing Chinese software industry thrive in its domestic market but not compete as an export business? The Chinese software industry's growth is a function of its domestic market orientation and the need for adaptation to local conditions. Off the shelf software available in English sometimes did not fit local business practices. A majority of the Chinese software firms are foreign-owned--therefore, resources were not short in supply, including research and development investments. Government aided the industry through the creation of Special Economic Zones and by enabling foreign investment in the industry. The experience of Indian mangers is one of the main advantages combined with the provision of skilled labor. These two factors differentiate the Chinese and the Indian experience. International alliances (e.g., portfolio investment) rather than foreign direct investment helped Indian companies. Indian companies were not threatened by operations of foreign firms. Government regulations for software were not as stringent as those for Indian manufacturing firms (e.g., industrial licensing). Both governments provided infrastructural support and export promotion. However, China's infrastructure (e.g., power supply) is considered superior to India's situation for software industry. English-language proficiency is not considered to be as important as technical and managerial skills, and the broader ICT (information and communications technology) industry context. In fact, the Y2K issues boosted markets and allowed Indian firms to prove that they could be simultaneously cost-effective and sensitive to deadlines.

The authors argue that the availability of skilled labor and high-quality management allowed Indian software firms to succeed in the international market. Although labor and management are important drivers of China's success in hardware, foreign direct investment (access to latest technology and global supply chains), infrastructural investment, and government policies aided Chinese firms more than skilled labor and managerial skills. Both countries improved micro-investment climates: software parks in India and Special Economic Zones in China. International linkages for software in India and hardware in China are critical to their success. These linkages were facilitated by government incentives and policies. The final chapter discusses emerging trends. Both countries are investing in both hardware and software sectors. China and India are also investing in each other's markets. While India may suffer from technical and skilled labor shortages, China may be affected by inflation and fluctuations in its currency.

This book provides a comprehensive examination of the evolutionary paths of hardware and software sectors in India and China. The strength of the book lies in the style used by the authors to present a large amount of data on firms to illustrate industrial and firm comparisons in two different countries. The book provides a good start for further in-depth analysis (e.g., case studies) of the combined effects of government policy, foreign direct investment, export market development, and corporate strategies on industrial and economic development.