Negroponte on "The Future of Political, Economic and Security Relations with China" -- May 1, 2007

US Deputy Secretary of State John D Negroponte testifies before the House Committee on Foreign Affairs, saying the US accepts that China has increased political and diplomatic influence.
May 1, 2007
Print 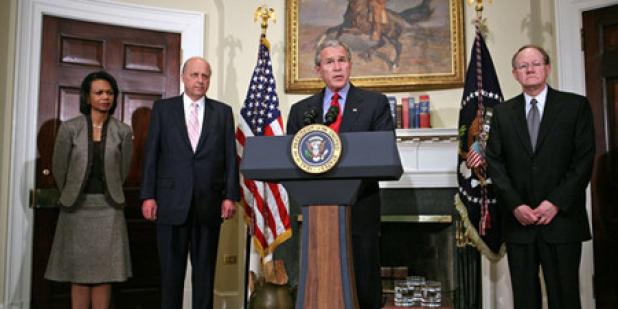 Mr. Chairman, members of the Committee, thank you for the opportunity to speak with you about U.S. policy toward China.

China’s rise as a global economic power is one of the major events of our time.  And with China’s economic strength has come increased political and diplomatic influence within and beyond the Asia Pacific region.

The United States acknowledges and accepts these developments.  Our strategic presence and bilateral alliances remain the unshakeable bedrock of our strong Asia policy.  They form the main guarantees of peace, stability, and prosperity throughout the region.  Indeed, our enduring commitment to Asia enhances our ability to encourage China to fulfill its potential as a partner in achieving common goals.

In this context, I would list six broad objectives for our bilateral interaction:
1) Maintaining peace and stability in East Asia;
2) Sustaining economic growth in China and globally, while ensuring energy security and protecting the environment;
3) Stemming the proliferation of dangerous weapons and related technology, and combating terrorism and transnational crime;
4) Safeguarding against the spread of infectious disease, including pandemic influenza;
5) Developing effective international responses to humanitarian crises; and
6) Promoting human rights and religious freedom.

In pursuing these objectives, U.S. policy is to encourage China to act as a responsible and stabilizing influence in international affairs.  This policy has yielded substantial dividends.

And while the Six-Party Talks focus on denuclearization, they have a broader significance—they are creating an important precedent for multilateral cooperation in this area of the world.

Nowhere is cooperation more important than in the relationship between China and Japan.  We are encouraged that Prime Minister Abe has made improving diplomatic relations between Japan and China a priority, and we welcome their exchange of visits.

China’s improved relations with its neighbors are a testament to the country’s robust trade ties, but also to China’s increasingly skillful diplomacy.  This is a positive development.  We want China to play an active role in Asia’s regional institutions, especially APEC, helping us make APEC more effective in ensuring economic prosperity and security for all its members.

Beyond the Asia-Pacific region, China has increasing interests around the globe.  The Middle East and Africa offer important examples of this.

Vis-à-vis Iran, China shares our assessment that Teheran must not obtain nuclear weapons capability.  To that end, China joined with the other permanent members of the UN Security Council and Germany in offering a generous package of incentives in June 2006 in exchange for Iran agreeing to suspend its proliferation-sensitive nuclear activities and entering into negotiations.

China has made no secret that it prefers negotiation in dealing with Iran, but in response to Iran’s failures to comply with its obligations, it nevertheless joined the UN Security Council in adopting two unanimous UN Security Council resolutions – 1737 in December 2006 and 1747 on March 24 of this year – to impose Chapter VII sanctions.

We expect China to fully implement its obligations under UNSCR 1747 to exercise restraint in the sale of heavy arms and missile technology to Iran.  We also expect China to take other important steps, including suspending investments in Iran’s oil and gas sectors.  Such investments, particularly at this sensitive time during P-5 discussions, send the wrong signal to the Iranian regime and raise serious concerns under U.S. law.

With a booming economy, China is seeking markets for its products and looking for sources of energy and other raw materials to meet growing domestic demand.  Africa is a case in point.  China purchased more than $1.9 billion worth of Sudanese oil last year, for example, and Beijing is seen as Khartoum’s diplomatic patron and benefactor.  The President, Secretary Rice, and other senior officials, have urged China to use its substantial leverage with Khartoum to help end the atrocities in Darfur, in particular by convincing President Bashir to allow the deployment of a peacekeeping force under UN command and control.  This is something that I have emphasized in my own conversations with Chinese officials in Washington, in Beijing, and most recently during my visit to Mauritania.

Turning to the economic dimension of our bilateral relationship, China has been our fastest growing major export market in the years since it joined the WTO in 2001.  Last year, for example, U.S. exports to China grew 32 percent.  Nonetheless, there are significant challenges in the U.S.-China economic relationship, brought about by China’s incomplete transition to a market economy and underscored by our $232.5 billion bilateral trade deficit.

As the world’s largest energy consumers, China and the United States also share an interest in energy security. We therefore are engaged in cooperative efforts to ensure stable energy markets, support energy efficiency, and develop cleaner technologies.  Both China and the United States are active participants in the Asia-Pacific Partnership on Clean Development and Climate, the APEC Energy Working Group, and the Five Party Energy Ministerial.

China’s commitment to clean energies, including nuclear power, was demonstrated in its recent decision to purchase four nuclear reactors from Westinghouse in a deal valued at between $8 - $10 billion.

The Strategic Economic Dialogue, led by Treasury Secretary Paulson, the Senior Dialogue, which I lead, and numerous other issue-specific dialogues and exchanges form the core of our large and growing bilateral relationship.  At times, however, bilateral dialogue is not sufficient to resolve issues of contention between China and the United States.  This Administration has not hesitated to pursue trade remedies and WTO cases to defend our economic interests.

We also must defend our values.  This is particularly the case when it comes to human rights.  The Chinese government needs to respect its citizens’ right to speak, assemble, and publish; to worship freely; and to plan their families as they choose, free of coercion.  We also believe that China’s people should have a meaningful say in how they are governed and to take part in the conduct of public affairs.  These are fundamental human rights stipulated in international human rights instruments, as well as in China’s own Constitution.

The situation in Tibet also remains an important human rights and religious freedom concern for the United States, as does the treatment of other minority communities such as Uighur Muslims in Xinjiang.

We coordinate with others in the international community who share our concerns about human rights in China.  Our message is clear:  China will not be considered a leader in the international system until it develops a more open, transparent, and free society, unleashing the innovation and creativity of its own people.

The depth of our concerns about human rights is matched by concern in the areas of nonproliferation and military modernization.

Regrettably, China has a mixed record on efforts to stem the proliferation of weapons, especially those related to missile technology.  It needs to implement effectively its export control regulations and to rein in the proliferation activities of its companies.  We will continue, as warranted, to impose sanctions against Chinese companies engaged in proliferation.

Further, China’s neighbors share our questions about the lack of transparency in China’s military modernization.  To enhance -- rather than detract from -- regional security, China should be more open about its military budget, doctrine, and intentions.  This includes answering our questions about their anti-satellite test in January.  China’s actions in conducting this test are clearly inconsistent with the direction in which we have sought to build our relationship and, moreover, are inconsistent with the spirit of cooperation outlined by President Bush and PRC President Hu, including in the area of civil space cooperation.

We are especially concerned about the growing arsenal of missiles and other military systems arrayed against Taiwan, as well as Beijing’s refusal to renounce the use of force against Taiwan.  We therefore urge China to increase cross-Strait dialogue, including through direct talks with Taiwan’s democratically elected leaders.  We will continue to adhere to our stabilizing one-China policy, based on the three U.S.-China Joint Communiqués and the Taiwan Relations Act (TRA).  Under the TRA we  make available to Taiwan defense articles and services necessary for Taiwan to maintain a sufficient self-defense.

In conclusion, Mr. Chairman, the United States wants a prosperous China as its partner in candid dialogue and constructive cooperation—stable at home, respectful of its citizens’ rights, and at peace with its neighbors.  Our policy is to encourage China’s integration as a responsible member of the global economy and international system as a whole.  Even though serious bilateral differences remain, we believe we have grounds for optimism in achieving this overarching goal.

Thank you very much.