This book by Andrew Nathan and Andrew Scobell was reviewed by Robert Farley for the H-Diplo discussion list in April 2013. It is reproduced here under Creative Commons license.
January 1, 2012
Print

Andrew Nathan and Andrew Scobell's China's Search for Security updates the 1998 Nathan and Robert Ross book The Great Wall and Empty Fortress. The argument of the earlier book, written at a much different stage of China's economic and military development, was that the 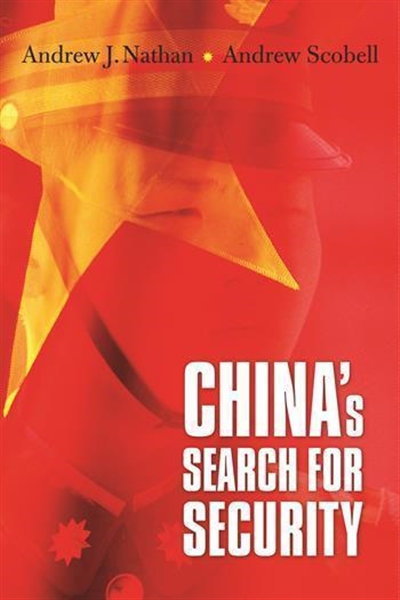 People's Republic was less threatening to regional and U.S. security than it seemed, and faced a wide range of security, political, and economic hurdles to growth and preeminence. The Great Wall and Empty Fortress treated skeptically American concerns that China would soon replace the Soviet Union as the United States' preeminent geopolitical rival.

Fifteen years later, it would seem that China has surmounted many of the obstacles in its rise to power. The Chinese economy continues to grow at breakneck pace, the military has become larger and more assertive, and the political system has successfully managed two leadership transitions. This growing power and assurance has alarmed many of China's neighbors, including the subjects of several island disputes in the East and South China Seas. The United States shifted attention towards the War on Terror, presumably allowing Chinese influence to grow unchecked.

Nevertheless, Nathan and Scobell argue that, despite its growing power, China's international position remains almost uniquely precarious. China borders more countries that any nation on earth, and continues to have border disputes with several of the most powerful. Other strong states, such as the United States and Japan, threaten China's littoral. Internally, political discontent threatens Beijing's control of outlying areas, including Tibet and Xinjiang. Concerns about political discontent and the maintenance of economic growth continue to draw the Chinese Communist Party's (CCP) focus inward.

According to Nathan and Scobell, the Chinese leadership continues to think of the world in context of China's precarious internal and external security situation, rather than in offensive terms. Americans and Europeans have a poor understanding of the Chinese security mind-set because of the lack of serious security threats in Europe and North America. In comparison with China, the United States has secure borders, modest neighbors, and few if any irredentist threats. China, on the other hand, constantly worries about all of these problems. This misunderstanding leads to misinterpretation of China's behavior, particularly in terms of thinking about China as a revisionist state. China's ability to influence global, and even regional, politics to its advantage remains sharply limited.

What has changed since 1998? China has become much more deeply integrated into the normative, legal, and organizational sinews of global governance. Nathan and Scobell detail the extent to which international organizations have forced China to develop institutional bureaucracies of compliance, especially in economic matters. The authors argue that China continues to make decisions based on interests rather than norms, but their own account of how international institutions and the demands of international commerce have changed the Chinese state seems to suggest that norms and rules have come to structure the manner in which China perceives its interests.

The authors also point out that China's entry into the global economy has enhanced the vulnerability of China's economy to global economic shocks, as well as to disruptions of its energy and resource lifelines. This has increased the responsibilities of China's military, and resulted in a shift of effort from traditional land-based power to the People's Liberation Army Navy, People's Liberation Army Air Force, and Second Artillery (missile force). China's military transformation remains very much a work in progress, however, with institutional structure and much equipment left over from the Maoist period. Chinese forces cannot yet hope to match the experience and technological sophistication of their counterparts in the United States and Japan.

Nathan and Scobell make a good case about China's enduring perceptions of itself as vulnerable. It is less clear how much China's perception of its security vulnerability matters for China's neighbors. A state primarily concerned with its security and vulnerability can still develop aggressive security policies; indeed, insecure states may be particularly likely to react assertively to security threats. The question of whether China seeks to revise the international status quo or simply defend its position within that status quo may not manifest in day-to-day security policy decisions.

The extensive historical treatment of Chinese foreign policy in the first section may bring some readers up to speed, but will feel cursory to subject matter experts. Other points will prove more bothersome to experts. For example, Nathan and Scobell argue that the primary source of foreign policy during the Mao Zedong period lay in the person of the Chairman rather than in terms of party factions with distinct policy preferences. However, they also argue that debates about foreign policy regularly broke down across factional lines. Granting the preeminence of Mao in the foreign policy process, it may be a step too far to understand foreign policy discord in the CCP simply in terms of personal-factional conflict. Deng Xiaopeng, Liu Shaoqi, and others seem to have had foreign policy preferences with content (not merely the result of factional disagreement), that were distinct from those of Mao.[1]

These issues matter less for modern foreign policy because of the increasing bureaucratization of the Chinese foreign policy-making process, brought about largely (although not entirely) through China's interface with international institutions. Indeed, it is unclear that the claim "most foreign policy issues in China are managed by a small elite with little influence from other political institutions and social forces" (p. xvi) is still true, given the breadth of China's engagement with the world and the number of bureaucratic players that interact with foreign actors on a daily basis. Nathan and Scobell may also understate the extent to which public opinion restricts the freedom of China's leaders. Although the CCP surely stokes public unrest for its own purposes, violent demonstrations can threaten public order and the economic relationship that the PRC has fostered with Japan.

A few stray details strike a discordant note: Soviet Premiere Nikita Khrushchev's speech to the Twentieth Soviet Party Congress was less surprising than the authors suggest. Specialists might also be surprised to learn that the collapse of the Soviet Union "left the U.S. for the first time as the principal potential threat to China" (p. 89), given the Korean War and the various conflicts over Taiwan in the 1950s.

Finally, Nathan and Scobell could have more extensively treated prospects for the continued stability of the CCP, which many regard as the elephant in the room. The authoritarian political system of the PRC is, by many accounts, increasingly at odds with the manner in which the Chinese economy is developing. The work of Yasheng Huang, Minxin Pei, and others has detailed deep concerns about the ability of the CCP to maintain the economic system it has created.[2]

China's Search for Security is a good introductory text for students and policymakers without expertise in the area. It highlights and summarizes most of the critical issues associated with Chinese security policy, even if experts will be disappointed by the relatively light treatment of many complex subjects. Professionals and academics specializing in international relations theory or diplomatic history may find it less useful, as it breaks little new ground on those subjects.