Claude Meyer's book was reviewed by Andrew Oros for H-Diplo. It is reprinted here via Creative Commons license.
January 1, 2011
Print

Will Either China or Japan Lead Asia?

Claude Meyer (senior fellow, GEM-Sciences Po, Paris) has produced a very readable, short volume that succinctly sets out the strengths and weaknesses of Asia's two economic giants, China and Japan--which together comprise 77 percent of economic output in East Asia and 15 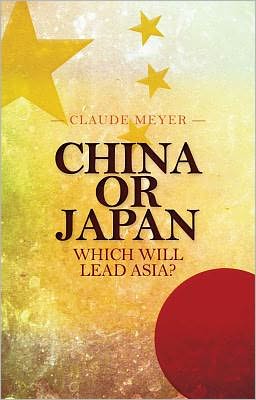 percent of world GDP and are the world's second and third largest economies, respectively (p. 35). By contrast, India, Asia's third "giant," contributes less than 3 percent of world GDP, and is the world's twentieth largest economy (p. 3). What is particularly refreshing and useful about the volume is that both countries are discussed in depth and in direct comparison to each other. A number of recent works engage with the question of Sino-Japanese relations from different perspectives (historical, economic, security), but I am not aware of another book that systemically reviews the parallels and contrasts in Japanese and Chinese economic development strategies, regional policies, and challenges for the future.[1] More frequently, China specialists present China's policies, Japan specialists, Japan's; international relations specialists present different aspects of the relationship between the two states; and Asian regionalists discuss regional policies as a whole. China or
Japan: Which Will Lead Asia? represents a useful departure from that pattern.

The payoffs of Meyer's approach are many. For one, it allows Meyer to show similarities in the economic policies followed by both states in their high growth phase--in both cases, he argues, the high growth was a result of four factors: "savings, education, the government, and private enterprise" (p. 20)--and also where they differ, such as in China's openness to foreign direct investment (pp. 16, 42) and, obviously, their different political systems. Since Japan is ahead of China in the stage of its economic development, elucidating these parallels allows one to consider ways that China may face similar challenges to Japan at a parallel stage of economic development--such as pressures to address environmental pollution, new and diverse demands from a more active civil society, or calls by trading partners to revalue its currency. Meyer also systemically explores the key challenges both states face for future economic growth, allowing him ultimately to address the question set out in the title of his volume.

In five chapters plus a short introduction, Meyer provides a concise history of relations between the two states (1,400 years in five pages--take that, Ming Wan or Richard Bush!), a summary of the policies that led to the "economic miracles" of both states, an analysis of the challenges both states face looking forward (especially on the question of economic growth), an analysis of both states' contributions to Asian regionalism, and a broader conclusion that engages directly with the question posed in the title--China or Japan: Which Will Lead Asia? The volume was translated from the original French by Adrian Shaw, who deserves credit for a very smooth and readable translation; only the frequent mentions of France (and infrequent mentions of the United States--discussed below) expose the book as not of native English-speaking origin.

It is a pleasure to read a book these days that takes Japan seriously--remember, the third largest economy in the world, the one that's not bailing out much of Europe (that would be Germany)? Everyone these days seems to know that the U.S. economy is the world's largest, and that China is nipping at the heels of the United States as number two--but number three? Meyer usefully and succinctly sets out Japan's economic strengths, particularly in the areas of finance, manufacturing, technology, and "soft power" (media, fashion, food, and overall image). At a time when Japan is rarely in the news, and when it is the news seems to be bad (nuclear disasters, political turmoil, largest budget deficit in the Organization of Economic Co-operation and Development [OECD], its aging society, the security threat from North Korea or China), it is encouraging to read some positive reporting about Japan today. The collection of facts Meyer presents is illuminating and a useful corrective to the negative thrust of most mass media reporting on Japan. For example, in the area of finance: "The Tokyo bond market is three times the size of all emerging Asia's bond markets put together and its stock market capitalization is twice that of China and Hong Kong combined" (p. 91). In terms of technology, Japan accounts for 22 percent of patents filed in the United States (p. 116) and 34 percent of the world total (versus China's 4.4 percent--p. 121), and five of the top ten companies in the world by number of patents are Japanese (p. 116). Moreover, looking forward, "Japan accounts for about 20 percent of the world's R&D expenditure despite having only 2 percent of its population" (p. 118). Who knew that Japanese industry utilizes 350,000 industrial robots, 45 percent of the world's total (p. 46)? Meyer puts great emphasis on Japan's technological lead over China--too much, in my view--which he argues makes Japan still the economic leader of Asia today, and likely for the next fifteen years or so (p. 146).

The book also provides a varied and illuminating compendium of facts about China's economy, including the astonishing contrasts to just thirty years ago, or even ten years ago. In terms of comparisons of Japan and China, this fact is especially striking: "[China] has overtaken Japan to become the world's second-largest industrial power, accounting for 12 percent of global value-added; yet as recently as 2000, China's industrial sector was only a third the size of Japan's" (p. 36). Statistics on China's domestic savings rate, energy dependence, pollution levels, investments in infrastructure, et cetera_ are not new, but are useful to have collected in one short volume, and to read thoughtfully arranged. Overall, however, readers are presented with a very optimistic view of China's future, with almost no direct engagement with (or citation of) those who forecast hard times in China's near future--despite Meyer's chapter 2 title, "Mighty But Vulnerable." Meyer quickly though directly dismisses common concerns about China's future declining labor force size due to the "one-child" policy (p. 44), its lack of a universal social safety net and the potential costs of creating one (pp. 43-44; 56), the bad debt in its financial system (p. 57), and the viability of one-party rule into the future (p. 63). He marshals the oft-cited Goldman Sachs report of 2007 to report that Chinese GDP will equal that of the United States by 2030, perhaps even 2027 (p. 114), dismissing the effect of the 2008 global recession and other new developments in the world economy and China's own domestic arena.[2]

It is unusual--and ultimately odd--to read a book about the future leadership of Asia that mentions the United States only in passing, and that defines the "Asia-Pacific" as East Asia plus "Australasia and Oceania" (p. 80) rather than a region that includes states such as the United States, Canada, Mexico, Chile, and the other states of APEC (Asia Pacific Economic Cooperation). Perhaps this provides a window to European views of the "Asia-Pacific"--that they really don't see the United States as a part of the Asia-Pacific--but at a time when the United States trades considerably more with Asia than with Europe, and discussions in Washington DC are all about "the pivot" to Asia (now often referred to as "the rebalance" after outcries from various quarters about the implications of the word "pivot"--not the least from Europeans), this framing is jarring and ultimately flawed.

Meyer concludes his book in the final two pages with a brief discussion of China's future challenge to U.S. global hegemony, but never systemically considers the challenge China poses to U.S. regional hegemony in East Asia. The reality of power dynamics in East Asia today, however, is that it is not about China and Japan as the two great powers of Asia, but about the United States, China, and Japan as the three great powers of Asia. The United States is an Asian power--the country that possesses the predominant naval force in the region, is the among the top three trading partners to nearly every state in the region, and enjoys the sort of "soft power" that Meyer ascribes to Japan in spades.

I agree with Meyer that China and Japan comprise a special class of states in Asia, with economies, military capabilities, and political and business relationships in the region that dwarf even strong "middle power" states such as India, South Korea, Indonesia, and Australia. But considering regional dynamics in the recent past, present, and looking out twenty years without systematically factoring in the United States misses a central facet of the regional picture. Meyer envisions a medium-term future (until 2030) where "we will see supremacy in Asia shared between the two countries [China and Japan] in an unstable and often conflictual configuration" (p.
145). In fact, however, power is shared among three states--the China, Japan, and the United States.

Apart from the systematic omission of the United States, I find the framing of the conclusion of the book also to be flawed: It is not that there are "three" scenarios for possible future relations between China and Japan, but rather four. Meyer's three scenarios--"Japan's unlikely acceptance of future Chinese hegemony, conflict between enemy rivals, or cooperation between partners with complementary assets" (p. 144)--ignores the presently existing scenario which I see as most likely to continue into the future: simultaneous cooperation with and balancing against China ("hedging" in the international relations literature). In Meyer's framing, this would be a combination of his second and third scenarios--but, really, it is a distinct strategy/scenario. However, Japan's hedge against China is only possible with the support of its American ally--both rhetorically and, more importantly, in terms of the 60-plus-year U.S.-Japan Security Treaty, the U.S. promise that it will come to Japan's military aid if territory administered by Japan is attacked (which, to be fair, Meyer mentions briefly in his prior discussion of Japan, pp. 105-108).

Although it pains a Japan specialist such as myself to write this, it is virtually impossible to imagine Japan leading Asia in the future--unless circumstances in the region and world depart dramatically from the scenarios most imagine (such as a break-up of China in some sort of civil war, a dramatic new technology that emerges, or some other such cataclysmic event, regionally or globally). Thus, the conceit of the title of this book threatens to put off potential readers. This is a shame, because this book deserves a wide readership. We need more comparative work that seriously considers both China and Japan together in a discussion of Asian regionalism.

In sum, read this book! The general reader will find much of interest, and will appreciate the accessible writing style--but the book also will offer new perspectives even to specialists on China, Japan, or the Asian region as a whole given the wide range of interesting facts and parallels between the two states that Meyer presents in his truly comparative framework. The book also would be a useful text for advanced undergraduate students in courses on China, Japan, or the international relations of East Asia; I plan to assign it to my own students. Overall, the book as a whole is an enjoyable and thought-provoking read despite a conclusion that I find somewhat misses the mark.