Andrew Mertha's book was reviewed by Robert Thompson for H-War and is published here under Creative Commons license.
March 21, 2015
Print 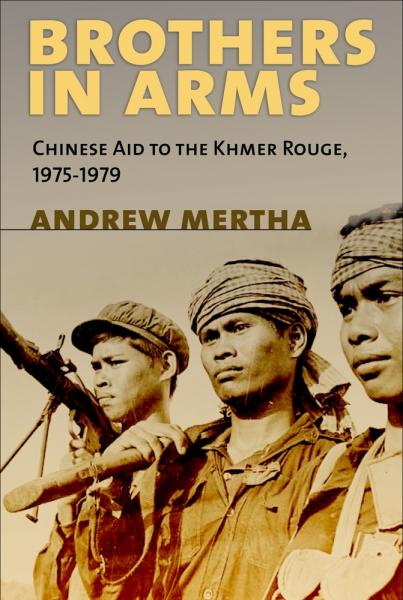 of political science, what follows is a detailed analysis of Leninist political systems and the limitations of Chinese influence on a much weaker client state. Through research at the National Archives of Cambodia and firsthand accounts obtained via interviews with Cambodians and Chinese civil servants, Mertha provides a succinct history of Sino-Khmer Rouge relations.

Fearing the curtailment of regional hegemony by the Soviet Union and recently unified Vietnam, China eagerly supported the fledgling Khmer Rouge, or Communist Party of Kampuchea (CPK). Of consequence to the author is how, despite substantial support, China did not control the Khmer Rouge. In part, organizational differences between the communist governments of China and Democratic Kampuchea (DK) limited the ability of Beijing to influence Pheon Phen. Additionally, a stalemate in relations furtherer hampered Beijing’s efforts to direct the Khmer Rouge.  Throughout his work, Mertha directly links events in the DK with the wider political systems that interacted in the country.

In terms of bureaucracy, the CPK established a political apparatus that made it hard for any entity to influence Pol Pot and his cadre. Following depopulation, Pheon Phen seemed more a collection of ministries than a city. Essentially, the majority of activities in the capital transpired at the “K” offices, which were the various party facilities. Atop the political system stood the Saloth Sar, an organization comprised of Pol Pot and his top lieutenants. Known as the CPK Standing Committee, this entity existed as the next layer of DK government. The rest of the country featured a collection of zones either under direct control under the General Staff or under the governance of zone commanders. The government in Pheon Phen “did not hesitate to exercise its authority and purge zone leaders who aroused suspicion” (p. 31). Unsurprisingly, fear and unease undermined CPK efforts to create a functional political apparatus. Moreover, Beijing found it difficult, if not impossible, to influence the CPK political system.

Mertha uses two instances of Chinese and DK interaction to validate his thesis. A key facet of Chinese aide to the DK was building projects. Construction of the Krang Leav airfield and the modernization of Kampong Som Petroleum Refinery symbolized the Chinese frustrations with the Khmer Rouge. The Khmer Rouge ignored Beijing’s insistence to construct the new airfield away from the border with Vietnam, as to avoid provoking the Vietnamese and their artillery. Instead, the DK selected Krang Leav, in the middle of the country and near the border with Vietnam, as the site for the new airbase. Furthermore, Krang Leav fell under the jurisdiction of one of the country’s most powerful and centralized entities, the Revolutionary Army of Kampuchea’s Division 502. This meant Chinese advisers were unable to influence anything beyond technical matters. Ironically, the centralization of Division 502 resulted in a completed project and “an unqualified success” for Chinese assistance (p. 97). Mertha notes that only the Vietnamese invasion prevented Krang Leav from going fully operational.

Conversely, bureaucratic shortcomings on both sides of the partnership made the Kampong Som project a frustrating one for the Chinese. As the Khmer Rouge ruthlessly depopulated the nation of educated and skilled citizens, the ability of the regime to execute development projects wavered. At Kampong Som, the only labor available came from unskilled persons: soldiers and educated citizens pretending to be unskilled peasants. Moreover, the collapses of important Chinese and DK bureaucratic entities turned a seemingly simply upgrade project into Beijing’s most embarrassing failure in Cambodia. Pol Pot’s micromanagement crippled the DK’s Committee of Public Works. Purges, too, prolifically undermined the political system and therefore the ability of the DK to properly manage the Kompong Som project. From China, the milieu of energy ministries meant overlapping jurisdictions and no clear line of responsibility when it came to supporting the petroleum refinery project. Only the Vietnamese invasion of Cambodia prevented further catastrophe at Kampong Som. Together, the Krang Leav and Kompong Som episodes best affirm Mertha’s argument that China could not influence the policies of a junior partner. Ultimately, China failed to use the DK as a means of offsetting Vietnamese power.

In essence, Brothers in Arms is a study of Leninist systems and how a larger, nuclear power like China failed to keep its client state in a position of inferiority. Historians studying diplomacy, Cold War, and Southeast Asia history will appreciate Mertha’s attention to detail and evidence base. The author’s writing style means even readers unfamiliar with the topic will understand Mertha’s discussions of the DK’s political apparatus. Undoubtably the author has produced a foundational book on the relationship between China and Democratic Kampuchea.