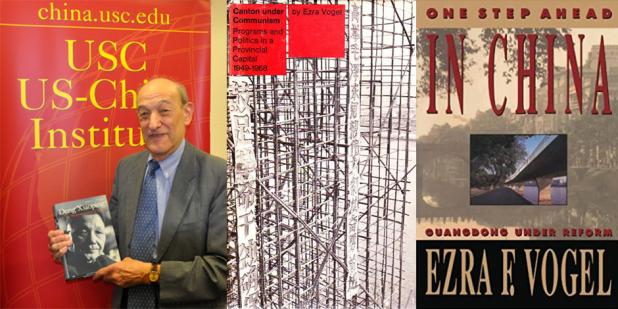 Ezra Vogel 傅高义, a founding member of the USC U.S.-China Institute board of scholars and among the most distinguished scholars of East Asia passed away on December 20, 2020. He was 90 years old. Vogel was a post-doctoral scholar at Harvard University from 1961 to 1964 when he joined the faculty. He formally retired in 2000, but remained active as a researcher and speaker for the next two decades. In 2011, Prof. Vogel visited USC and drew on his monumental study Deng Xiaoping and the Transformation of China for a lecture about Deng's foreign policies were very much driven by his assessment of the desperate need China had for better trained personnel, foreign capital, and foreign technology. It's below and at our YouTube channel.

Vogel was born in 1930 in Ohio and graduated from Ohio Wesleyan in 1950. He earned his doctorate from Harvard in 1958. He taught for a year at Yale before accepting a fellowship for post-doctoral research. While at Harvard, he often served in leadership positions, at various times heading the Fairbank Center for Chinese Studies, the Council on East Asian Studies, the Asia Center and the Program on U.S.-Japan Relations.

A prolific and influential scholar on East Asia, Vogel's China studies books include Canton under Communism; Programs and Politics in a Provincial Capital, 1949-1968 (1969), One Step Ahead in China: Guangdong under Reform (1989), Chinese Society on the Eve of Tiananmen: The Impact of Reform (co-editor, 1990), Living with China: U.S./China Relations in the Twenty-First Century (ed., 1997), China at War: Regions of China, 1937-1945 (co-editor, 2007) and Deng Xiaoping and the Transformation of China (2011). Vogel began publishing on Japan in 1963, with his Japan's New Middle Class; the Salary Man and his Family in a Tokyo Suburb. Other books included Modern Japanese Organization and Decision-making (1975), the best-selling Japan as Number One: Lessons for America (1979) and his follow-up Is Japan Still Number One? (2000).

Vogel had several books addressing East Asia more generally. These include Ideology and National Competitiveness: an Analysis of Nine Countries (1987), The Four Little Dragons: The Spread of Industrialization in East Asia (1993), The Golden Age of the U.S.-China-Japan Triangle, 1972-1989 (co-editor, 2002) and China and Japan: Facing History (2019). Other studies include A Modern Introduction to the Family (co-author, 1960), Comeback, Case by Case : Building the Resurgence of American Business (1985) and The Park Chung Hee Era: The Transformation of South Korea (co-editor, 2011).