James I. Matray, ed.'s book was reviewed by Luke Griffith for H-War and is published here under Creative Commons license.

The presidency of Harry S. Truman continues to inspire historical research. Northeast Asia and the Legacy of Harry S. Truman is the eighth volume of the Truman Legacy series and the product of two conferences hosted by the Harry Truman Library and Museum in the summer of 2010. The series maintains a clear purpose: to provide a forum for historians to present the latest research on the Truman administration. 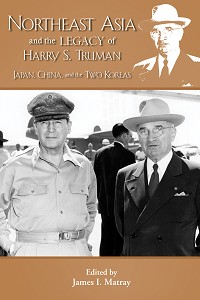 James I. Matray served as the program chair for both conferences, edited the various essays, and wrote a balanced, thorough introduction.

Prior to taking office in April 1945, Truman possessed a rudimentary understanding of Northeast Asia. Despite being ill-prepared, President Truman soon grappled with “the most controversial decision”—whether or not to use the atomic bomb against Japan.[1] Marc Gallicchio’s essay sheds new light on why the Truman administration was unwilling to alter its demand for Tokyo’s unconditional surrender, which required the abdication of Emperor Hirohito. Employing atomic weapons, Gallicchio concludes, was a means to end the war without challenging the policy course that he inherited from President Franklin D. Roosevelt.

Roger Dingman’s and Sayuri Guthrie-Shimizu’s essays examine President Truman’s legacy in postwar Japan. “The Japanese peace settlement of 1951,” Dingman writes, “ranks as one of the greatest achievements of twentieth-century American diplomacy” (p. 46). Specifically, Dingman praises Truman’s selection of John Foster Dulles to serve as the principal treaty negotiator and credits Truman for garnering the bipartisan support necessary to ratify the Treaty of Peace with Japan. Guthrie-Shimizu studies the previously unexamined Japanese reaction to Truman’s firing of General Douglas MacArthur in April 1951, who had served as the supreme commander for the Allied powers in Japan and as head of the United Nations forces in Korea, and she identifies MacArthur’s dismissal as “one of the most significant legacies” of Truman’s presidency (p. 86). Though initially saddened, the Japanese grew increasingly concerned over MacArthur’s public criticism of the Truman administration’s policies in the Korean War. The lessons Truman gleaned from the incident, she explains, were the paramount importance of maintaining civilian control over the military and the support of U.S. allies.

The Truman administration’s policies in China proved less successful than in Japan. By 1945, China was consumed by civil war, which pitted Mao Zedong’s Communist forces against Jiang Jieshi’s Nationalists. In his essay, Simei Qing reveals that Truman planned to accept the impending Communist seizure of Taiwan, which was part of a larger effort to undermine the Sino-Soviet alliance and to establish commercial ties with Beijing. Truman, Qing explains, abandoned this notion after the Korean War erupted in June 1950, and he identifies the U.S. decision to cross the 38th parallel in Korea as the critical turning point in U.S.-Sino relations. Though Truman antagonized Beijing at the outset of the Korean War by deploying the U.S. Seventh Fleet in the Taiwan Strait, in the next chapter, Xiaobing Li argues that it was a prudent decision, which forced Mao to abandon his plans to invade Taiwan. Truman’s refusal to recognize Beijing as China’s legitimate government, however, poisoned Sino-American relations for almost two decades, which became obvious as Sino-American peace negotiations deadlocked during the Korean War. Charles Young’s essay demonstrates that a cease-fire remained elusive because the United Nations Command relied on coercion to deny repatriation to Communist prisoners of war.

The Truman administration also left a controversial legacy in the Korean Peninsula. The foremost expert on the United States and the Korean War, William Stueck, examines six of Truman’s decisions that contributed to the eventual division of Korea. Stueck, however, insists that the outcome would not have been different if President Roosevelt had lived and claims that “it is not at all clear that anything done by the Americans from September 1945 onward ... would have resulted in Korean unification” (p. 175). In his essay, Steven Casey lauds Truman’s decision making in Korea, which he labels “invariably systematic, measured, and prudent” (pp. 196-197). Truman’s critics, in contrast, emphasize his inability to control General MacArthur during the Korean War. Ken Heckler and Robert Watson provide a thorough account of MacArthur’s consistent insubordination and explain how military strategy and inter-alliance politics forced Truman to dismiss the popular general. Kim Hakjoon’s essay, finally, reveals how the Truman administration’s policies reinforced anti-American sentiments in South Korea, which persisted into the 1990s. He credits conservative South Korean politicians, though, for rehabilitating Truman’s image.

The remaining essays by Clayton Laurie, Michael Warner, David Hatch, and Stanley Sandler wrestle with the Truman administration’s intelligence legacy. Laurie challenges the conventional depiction of the Central Intelligence Agency (CIA) during the Truman administration, which blames the CIA for its inability to predict the North Korean invasion of June 1950. Laurie, however, argues that the CIA’s deficiencies have been exaggerated and claims that the CIA provided adequate warning of the possible North Korean aggression. Sandler and Warner highlight the erosion of U.S. intelligence capabilities in the wake of World War II, and Hatch argues that tactical communications intelligence became a critical component of the U.S. military apparatus during the Korean War.

Northeast Asia and the Legacy of Harry S. Truman adds nuance and complexity to the historiography surrounding Truman’s presidency. Relying on the most recent scholarship, the book makes clear that President Truman deserves praise and criticism for his policies in Northeast Asia. Truman oversaw the ratification of the Treaty of Peace with Japan and demonstrated restraint by not intervening in the Chinese civil war. Truman, however, was unable to salvage U.S.-Sino relations in the wake of Mao’s victory, failed to control General MacArthur during the Korean War, and bequeathed an unresolved stalemate in Korea to his successor, President Dwight Eisenhower. Ultimately, the Truman administration experienced mixed results in Northeast Asia.