Video of presentations made at the U.S.-China Institute's conference is now available. Experts explored the central issues, institutions, interest-groups, and individuals at work in producing U.S. policy toward China. 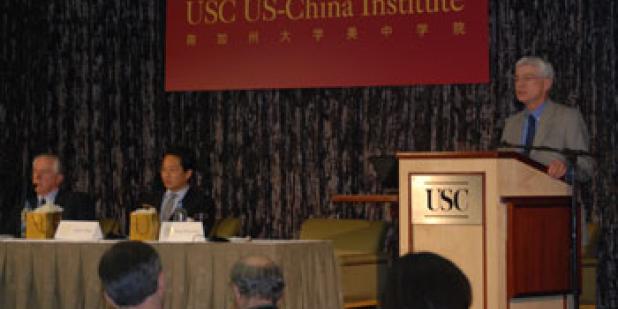 This day-long conference featured top government officials, organization chiefs, and scholars discussing key issues in the U.S.-China relationship and how policies toward China are made. Speakers identified who the key individual and institutional players are, what interests they seek to advance, and the tactics they use to shape policy.

In addition to these presentations and discussion, the conference featured a screening and discussion of "Election '08 and the Challenge of China," a new documentary produced by the USC U.S.-China Institute. Richard Baum and Perry Link discussed the documentary and the issues it addressed.

Several news organizations covered the conference. Summaries and links to articles are available in our "USC and China in the News" page for October 2008.

After two years as U.S. Deputy Assistant Secretary of State for East Asia, Thomas Christensen has just returned to his duties as professor of politics and international affairs at Princeton University. His many publications include Useful Adversaries: Grand Strategy, Domestic Mobilization, and Sino-American Conflict, 1947-1958 (Princeton, 1996) and influential articles such as “China: Getting the Questions Right” (The National Interest). In the years prior to his serving in the State Department, Prof. Christensen often served as a consultant to various U.S. government agencies. In 2002 he received the U.S. State Department’s Distinguished Public Service award.

Professor of political science Richard Baum has taught at the University of California at Los Angeles for nearly four decades. The former director of the UCLA Center for Chinese Studies, Baum is the author or editor of numerous books, including Burying Mao: Chinese Politics in the Age of Deng Xiaoping. His latest book, due out in 2009, is China Watcher: Confessions of a Peking Tom. He founded ChinaPol, an email discussion group of scholars, officials, journalists, and other professionals in 1995. It now has 900 members.

[Rick Baum discussed Election '08 and the Challenge of China.]

"Military Interactions and Arms Control: Lessons from the Field and the Desk"

A nuclear physicist, Jay Davis is a former National Security Fellow at the Center for Global Security Research at Lawrence Livermore National Laboratory. From 1998 to 2001, he was the founding Director of the Defense Threat Reduction Agency of the U.S. Department of Defense, an agency created to address the threat posed by weapons of mass destruction. For his contributions to national security during his tenure at Defense, he was twice awarded the Distinguished Public Service Medal, the Department’s highest civilian award. From the early 1970s to the late 1990s, Dr. Davis was a researcher and engineering manager at Livermore, ultimately serving as associate director of the Earth and Environmental Sciences Directorate.

Banning Garrett
"The Strategic Basis of U.S.-China Relations and the Challenges of the 21st Century"

Banning Garrett directs the Asia Society’s initiative on U.S.-China cooperation on energy and climate. He previously headed the Atlantic Council’s Asia program. Dr. Garrett has been a U.S. government consultant for more than twenty years and has taught at George Washington University. His analyses have appeared in a wide range of publications, including International Security, The Washington Quarterly, New York Times, Asian Wall Street Journal, and Asian Survey.

An economic historian and trained electrical engineer, Eugene Huang has been a senior policy advisor to Secretary of the Treasury Henry Paulson since 2007. He previously was a White House Fellow and served as Virginia’s Secretary of Technology. Mr. Huang has conducted research on the economics of standards and policies toward innovation and competiveness at Stanford University’s Institute for Economic Policy Research. At Treasury, he has been responsible for coordinating key portions of the U.S.-China Strategic Economic Dialogue. He also managed the candidacy of Robert Zoellick to become World Bank president.

For ten years, Robert Kapp was president of the U.S.-China Business Council, the preeminent organization of companies involved in U.S.-China investment and trade. Since 2004, he’s been principal of Robert A. Kapp and Associates, a business consulting firm. Prior to assuming the Council presidency, Dr. Kapp taught Chinese history at Rice University and the University of Washington and served as editor of the Journal of Asian Studies. From 1979 to 1994, he headed two organizations, the Washington State China Relations Council and the Washington Council on International Trade. He’s frequently testified before Congress and is the author of numerous newspaper and magazine articles.

Henry Levine is a Senior Director with advisory firm Stonebridge International. He previously had a distinguished career as a Foreign Service Officer, culminating in service as Deputy Assistant Secretary of Commerce for Europe (2002-2003) and for Asia (2003-2005). Prior to this, Mr. Levine completed several assignments in China, including service as Consul General in Shanghai (1999-2002) and Deputy Chief of the U.S. Embassy’s Economic Section (1989-1992). Mr. Levine has testified before Congress on China’s compliance with World Trade Organization requirements and is a frequent speaker before business and academic groups.

Chinese literature Professor Perry Link has returned to Southern California as the Chancellor Chair for Innovation in Teaching Across Disciplines at the University of California at Riverside. One of the foremost American teachers of Chinese, Link previously taught at UCLA and at Princeton. He has published several volumes of literary translations as well as studies such as Evening Chats in Beijing: Probing China's Predicament and The Uses of Literature: Life in the Socialist Chinese Literary System. He was co-translator of The Tiananmen Papers.

[Perry Link discussed Election '08 and the Challenge of China.]

Professor Lynch is currently researching how Chinese political and intellectual elites expect China will, or should, change in the years leading up to about 2030. He is focusing on five interrelated issue-areas: domestic political processes and institutions; comprehensive national power and its implications for the country's role(s) in world politics; Party-state defense of cultural integrity and national identity under conditions of deepening globalization; development and diffusion of potentially transformative new technologies; and prospects for achieving sustainable development.

Professor Mazmanian is a widely published scholar in the field of policy implementation and, in particular, environmental policy. His research has been focused on the transition to the greening of industry and on sustainable communities. He has received the Aaron Wildavsky Enduring Contribution Award from the American Political Science Association, and the Thomas R. Dye Service Award from the Policy Studies Organization. He recently completed service on the China Council for International Cooperation on Environment and Development's Task Force on Environmental Governance.

A prolific writer on U.S. relations with Northeast Asia, Alan Romberg is Director of the East Asia Program at The Henry L. Stimson Center, where he has been since 2000. From 1964 to 1985, he was a foreign service officer, focusing on East Asia in a number of positions, including on the National Security Council staff and as Deputy State Department spokesperson. For the next decade, Mr. Romberg was C.V. Starr Senior Fellow at the Council on Foreign Relations. He returned to government service in 1994, serving as Principal Deputy Director of the State Department’s Policy Planning Staff, Senior Advisor to the U.S. Permanent Representative to the UN, and Special Assistant to the Secretary of the Navy. He is author of Rein In at the Brink of the Precipice: American Policy Toward Taiwan and U.S.-PRC Relations.

Stan Rosen joined the USC faculty in 1979 and is a specialist on Politics in the People's Republic of China, Asian Politics, Comparative Politics, Politics and Social Change, and Chinese Film. He is the author of Red Guard Factionalism and the Cultural Revolution in Guangzhou, The Role of Sent-Down Youth in the Chinese Cultural Revolution, Survey Research in the People's Republic of China (co-authored), Policy Conflicts in Post-Mao China: A Documentary Survey with Analysis (co-edited), and On Socialist Democracy and the Chinese Legal System: The Li Yizhe Debates (co-edited).

A Boston College political scientist, Robert Ross is currently focused on China security policy and the implications of China’s rise for its neighbors and for the United States. Prof. Ross is the author or editor of numerous books, many of which have been translated into Chinese and other languages. Recent co-edited books include Rising China: Theoretical and Policy Perspectives, New Directions in the Study of Chinese Foreign Policy, and Normalization of U.S.-China Relations: An International History. He’s the author of Negotiating Cooperation: The United States and China, 1969-1989.  A frequent consultant for the U.S. government, Prof. Ross has also taught at a number of Chinese institutions.