Mahnken and Blumenthal, eds., Strategy in Asia - The Past, Present, and Future of Regional Security (October 15, 2014)

Strategy in Asia, edited by seasoned former Pentagon policy officials Thomas G. Mahnken and Dan Blumenthal, is not another exposition on 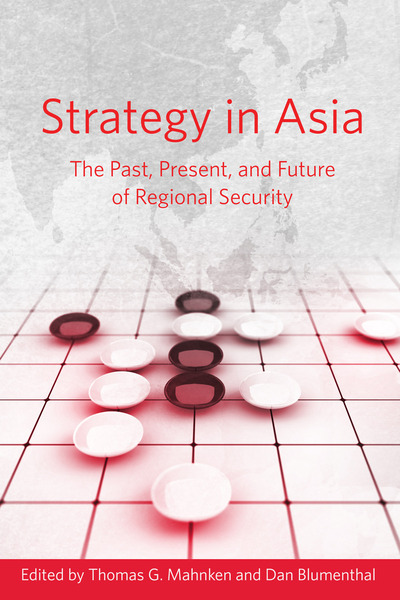 the dynamic aspects of Asia’s rapidly evolving strategic horizon, although there is some of that. Appropriately, given the stakes, there are plenty of recent volumes that largely assess China’s challenge to the regional and global order and offer advice for US policy. But in Strategy in Asia, professionals and students of Asian affairs will find something more useful: a relatively brief (295 pages), fact-filled primer on the enduring and dynamic factors that motivate the strategies of Asian states.

Emerging from a 2011 conference at the United States Naval War College, this book contains fourteen chapters that are coherently assembled and written by some of the top experts in the fields of strategy and Asian strategic developments. In his introduction Aaron L. Friedberg expands on one of this volume’s major theme: an examination of the elements that contribute to the strategic choices underlies any understanding of the strategies of Asian nations. He offers that a state’s unique geography, demography, economics, and technology challenges contribute to how it develops its national strategy.

Strategy in Asia then examines the less dynamic aspects of Asian strategies in two sections. In one section, four chapters analyze the impact of geography on Asian strategy, each addressing its impact on China. Roy Kamphausen’s scene-setting chapter, “Asia as a Warfighting Environment,” broadly examines decisive features of Asian geography and concludes that China and the United States are best positioned to exercise control. In contrast, China’s efforts to break out of the confines of the First Island Chain dominate Toshi Yoshihara’s chapter, “China’s Maritime Geography.” In “Mahan and the South China Sea,” James H. Holmes applies the lenses of Alfred Thayer Mahan to conclude that China will have great difficulty controlling this sea unless it develops maritime power projection forces. Both Yoshihara and Holmes stress the importance for China’s maritime ambitions of reestablishing control over the island of Taiwan.

The impact of culture on Asian strategies dominates a subsequent section of four chapters, starting with Colin S. Grey’s chapter, “Strategy and Culture,” an insightful review of the pitfalls and advantages of the concept of “strategic culture.” But it is the next three chapters, which use a largely historical perspective to describe elements of the strategic cultures of China, Japan, and India that form the heart of the volume. Andrew R. Wilson, in “The Chinese Way of War,” usefully dispels common myths about Sun Tzu being “dismissive of the use of force” (p. 112) and that Zheng He proved that China was not “expansionist” (p. 116). In the “Japanese Way of War,” S. C. M. Paine wonderfully surveys the irrational and the rational elements of Japan’s conduct of war to help explain its successes and failures. Timothy D. Hoyt’s provocative chapter, “The Indian Way of War,” both builds up and then deconstructs the case for such, only to conclude with more functional explanations still rich with insight.

Reviews of more dynamic elements affecting Asian strategies in the context of military competition dominate the volume’s final five chapters. In “Military Modernization in Asia,” Richard A. Bitzinger dives into the weeds of weapons systems and Asia’s general military buildup, which is creating greater political uncertainty and will ensure future wars are far more destructive. But is there an arms race in Asia? Thomas G. Mahnken argues this is less the case in “Arms Races And Long-Term Competition,” in that China is largely building forces to fulfill national objectives, such as taking Taiwan, over racing, or reacting specifically to US military power. In “Nuclear Deterrence in Northeast Asia,” Michael S. Chase also downplays the potential for a US-China nuclear arms race, arguing that China’s growing nuclear missile arsenal will still remain limited to strategies of assuring it ability to retaliate. North Korea’s growing nuclear arsenal, he argues, poses dilemmas for Washington and Beijing.

But can China and the United States afford their military competition? In addition to assessing the economic policies and prospects for the United States, China, and Japan, Bradford A. Lee, in “The Economic Context of Strategic Competition,” argues that the most economically successful state will be the one that can innovate the fastest, thus gaining the best position to fund military innovation.

These chapters, however, will tend to “age” quickly, especially as China reveals more of the scale of its military buildup, which increasingly will include global conventional military reach and a clear military projection into outer space. But this does not diminish this volume’s general utility as an introduction to the factors that enable a better understanding of Asian responses to future challenges.

Washington’s challenge in sustaining its post-World War Two power position, which has been largely welcomed by its allies, now being increasingly challenged by China, is addressed by Michael R. Auslin in his chapter, “The US Alliance Structure In Asia.” He offers that Washington must seek an evolution of its “spoke and hub” system of largely unrelated alliances, into the beginning of a real regional alliance system. The enduring factors richly explored in Strategy in Asia may auger against this happening, but a surely dynamic strategic environment could prove otherwise.

Whether your academic program requires a text on the determinants of Asian strategies or your professional duties demand that you gain essential background and insights on this region quickly, you would be well advised to turn to Strategy in Asia. Asia will remain fraught with dangerous dynamics but the utility of Strategy in Asia will endure.