Given the tens of thousands of existing titles on the Second World War, it is difficult to uncover promising areas for new research.

Clash of Empires in South China by Franco David Macri finds such a fresh topic, detailing the turbulent and influential period from 1937 to 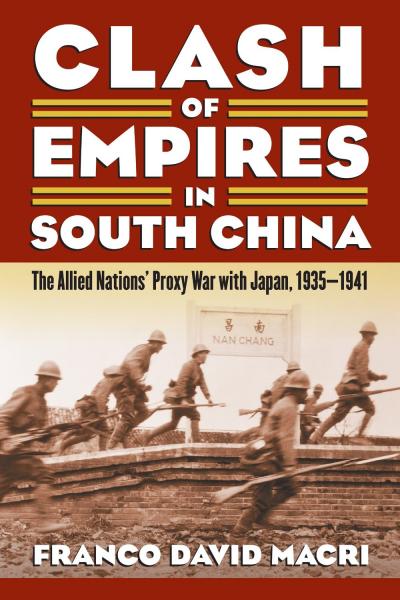 1941, when Great Britain, Canada, and the United States became politically and logistically involved in the Sino-Japanese conflict, paving the road to the Pacific war. Although Macri's effort is commendable and highly professional, the overly ambitious integration of a wide range of political and military affairs and a shifting focus limit the book's value to academic niches rather than general readers.

Macri's primary argument is that the Western nations of Britain, Canada, and the United States engaged in a "proxy war" with Japan from 1937 to 1941, by encouraging Chinese resistance, in hopes of deterring future Japanese aggression. Embedded in this strategy was a geopolitical belief that creating ties between Western nations, China, and the sometimes allied Soviet Union would present a credible "collective security" system in Asia, providing security while minimizing military burdens. Macri argues that both of these policies backfired, resulting in the short term in an increasingly isolated and belligerent Japan, which massively expanded the war in 1941, and in the long term leading to a breakdown of traditional balance of power systems in East Asia. This is an interesting thesis, but Macri's attempt to prove it is burdened by shifting thematic approaches and discontinuous subject areas, making it difficult for the reader to engage with the argument.

Macri uses five historical approaches that, while all related to the primary argument, are never sufficiently or convincingly developed.

Each approach is worthy of a standalone work in its own right, but mashed together it becomes difficult to identify core ideas. First, Clash of Empires functions as a military history of the Sino-Japanese War, with detailed descriptions of several battles, accompanied with the full regalia of operational maps featuring division movements noted by a thicket of arrows and boxes. The multiple battles of Changsha are prominently featured as part of Macri's attempt to highlight effective combat performance by Chinese troops, if decently supplied and well led. Second, the book is a diplomatic history narrative of high-level politics in London, Washington, and Ottawa, built on excellent primary sources and a nuanced reading of Western governments' China policy. Third, the work is a history of a city, Hong Kong, highlighting the importance of Hong Kong in Asian trade patterns and describing in detail the defensive plans made prior to 1941. Fourth, Clash of Empires is an economic history, delving into the complicated wartime economic arrangements, especially the widespread smuggling of oil and weapons into China, and rare minerals, like tungsten, out of China. Lastly, Macri's study is a history of China, and suggests that the KMT

(Kuomintang) military and political structure was more effective than is generally realized in opposing the Japanese between 1938 and 1941.

Each of these approaches is valuable in its own right but placed together, it is difficult for the reader to maintain a narrative or analytical focus with so much going on.

The most original and articulate research in the book is an examination of the role played by Canada from May to December 1940.

Macri shows a deft touch in pulling together personal papers, Canadian government records, and the role of private groups, such as the Canadian Institute of International Affairs. These records show how Canadian interests, by leveraging close connections with both the British and Americans, were able to smooth the transfer of Western power in Asia from embattled Britain to the United States. Subtle Canadian diplomatic maneuvering succeeded in maintaining logistical support to the Chinese Army and Air Force, and acted to cement the emerging Anglo-American strategic partnership. The prime minister of Canada, Mackenzie King, comes across as savvy, farsighted, and at times ruthless, such as during the deployment of Canadian troops to Hong Kong in spite of a lack of adequate defenses.

Another bright spot of Macri's scholarship is his articulation of the multifaceted role of Hong Kong during the 1937-41 period. After the defeat of Chinese forces in the Yangtze River Valley in 1937-38, and the isolation of Shanghai, Hong Kong was the most important link between China and the outside world, and an important symbol of British political resolve in Asia. After the Japanese occupation of Guangdong in 1939, Hong Kong was subjected to a variety of Japanese pressure tactics, including searches of shipping coming into and out of the colony. Acting without orders from London, Major General Arthur Grasett, commander of British troops in Hong Kong, began an extensive program of intelligence cooperation with Chinese forces in order to protect the colony. This tentative partnership allowed small numbers of British officers to be embedded in observer positions with Chinese units to gather military intelligence, and a reciprocal arrangement allowed the stationing of Chinese military signal intercept teams inside Hong Kong territory.

A less successful aspect of Western policy involved the dispatch in October 1941 of two Canadian infantry battalions, roughly two thousand men, to reinforce Hong Kong. The reinforcement was designed as a show of force toward Japan, in conjunction with increased American support for the American Volunteer Group, aka Flying Tigers, in China and the stationing of B-17 bombers in the Philippines. Macri argues that the dispatch of the Canadian troops, C Force, was also part of a larger strategy by the British and Canadians to obliquely assist the Russians, then fighting the Germans outside Moscow, by boosting Chinese morale and focusing Japanese attentions southward, instead of into Siberia. In reality, C Force was compelled to defend Hong Kong less than one month after arrival, and without its full complement of equipment. In addition to suffering heavy casualties during the battle of Hong Kong, December 8-25, 1941, the men of C Force spent over three and a half years as prisoners of war.

Throughout the book, a number of small but frustrating elements that should have been picked up in copyediting slipped through. For example, on page 179, Macri notes that the Japanese captured several AFVs in November 1939, but since an "AFV" is not defined in the text, listed in the index, or detailed in the abbreviations, I can only guess at what it means. The very concept of a "proxy war" itself, which is included in the title, is never defined or examined, a potentially dangerous ambiguity considering that current readers regularly hear of actions ranging from economic sanctions, drone strikes, and cyber attacks as "proxy wars." Unnecessary hedging of assertions through poor phrasing, "somewhat successful," "somewhat coordinated," and "somewhat collaborative," dilutes the thesis and leaves the reader confused. Sourcing is very solid in the diplomatic history segments, but citations in the military history portions are questionable; citations for the important battle of Changsha are built on the less than solid ground of New York Times reports.

I hope that Clash of Empires will be only the first of a series of books that will delve into the 1937-41 period in China and East Asia, using any of the numerous historical approaches highlighted by Macri, but I have a hard time recommending the book because I am unsure who it is suitable for. Clash of Empires does not fit easily into any of the conventional fields of academic scholarship, and is too detailed for popular interest. Diplomatic historians of Canada are perhaps the group that can most benefit from the book, and historians of the British Empire should find Clash of Empires an intriguing addition to their collections. I hope that in future works, Macri can refine several key narratives into more specific works because there is great academic potential in his insightful, relevant research of the 1937-41 period in China, but only if the focus is crystal clear.