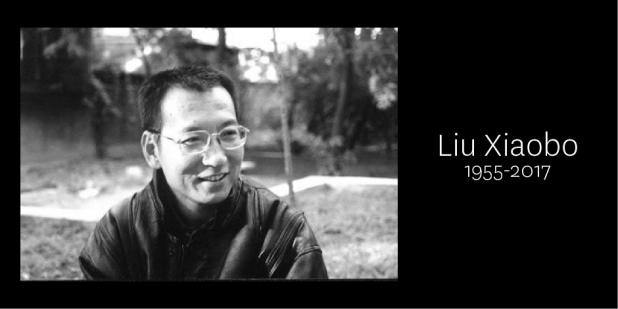 Nobel Peace Prize laureate Liu Xiaobo 刘晓波 died today, a prisoner of the Chinese state. Suffering from terminal liver cancer, he was granted medical parole on June 26, but denied the right to leave China for treatment.
Liu Xiaobo was 61 when he passed away. He was a literary scholar and a political activist who devoted himself to making China’s government accountable to China’s people. As a graduate student at Beijing Normal University he attracted considerable attention criticizing Confucian tradition. He earned his Ph.D. and then went to the United States for post-doctoral research. When student-led demonstrations broke out in Beijing in spring 1989, he returned to participate. Liu never advocated violence, but defied the government. On June 2, he and others wrote to explain their latest hunger strike: 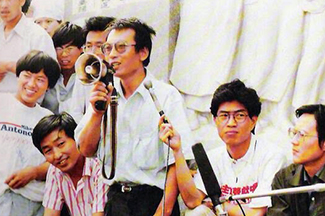 “We are not in search of death; we are looking for real life. Under the irrational and militantly violent pressure from the Li Peng government, the Chinese intellectuals must cure their thousands-of-years-old soft-boned disease of responding with only rhetoric but no action….
“This movement toward democracy, which is unprecedented in Chinese history, has from the very start adopted legal, nonviolent, rational, and peaceful means to fight for freedom, democracy, and human rights….
“So our hunger strike is no longer a petition against martial law. We advocate the promotion of democratization in China through peaceful means; we are against any form of violence. However, we are not afraid of brute force. We want to show that democracy practiced by the people by peaceful means is strong and tenacious. We want to break the undemocratic order maintained by bayonets and by lies. This ridiculous and unreasonable attempt to impose martial law on students and people of all walks of life who are peaceful petitioners has set a very ugly precedent in the history of the People's Republic of China. It has brought great shame to the Communist party, to the government, and to the army; it has ruined the results of ten years of reform and opening up.”
He stayed in the square to the end, negotiating safe passage for the remaining demonstrators. He was then arrested as one of the black hands of the protest. The documentary The Gate of Heavenly Peace translated Chinese state television’s comment on Liu Xiaobo:
“Let's examine Liu Xiaobo's deeds during the student unrest. Let's see how this evil mastermind conspired with reactionary forces at home and abroad to manipulate the students and instigate dongluan [disorder].
“History will not conform to the will of reactionaries. The people, only the people, are the true masters of China!” 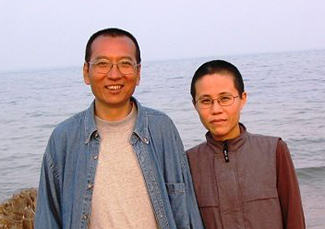 Liu’s first incarceration lasted 20 months. He couldn’t return to teaching and his marriage was a casualty of his imprisonment. He and the poet/artist Liu Xia 刘霞 had met in the 1980s. In the 1990s they became a couple. When Liu Xiaobo was sent to prison in 1996 for the third time, the two successfully fought for the right to marry. Liu Xiaobo was released in 1999, but was unbowed.
In 2008, Liu and others combined to write Charter 08, modelled after Charter 77, written by Czechoslovakian dissidents. They published it on December 8, the 60th anniversary of the United Nations’ Universal Declaration of Human Rights. In the preamble, they also noted it was the 100th anniversary of China’s first constitution, written in the last years of the Manchu Qing dynasty. The entire Charter 08 merits reading, but here we highlight the questions it opens with:
“[T]he Chinese government’s approach to ‘modernization’ has proven disastrous. It has stripped people of their rights, destroyed their dignity, and corrupted normal human intercourse. So we ask: Where is China headed in the twenty-first century? Will it continue with ‘modernization’ under authoritarian rule, or will it embrace universal human values, join the mainstream of civilized nations, and build a democratic system?”
Liu and his co-authors argued that while “China has many laws but no rule of law; it has a constitution but no constitutional government.” They argued that freedom, human rights, equality, republicanism, democracy, and constitutional rule should be the foundation upon which a new China is built.
Liu and others were taken away that day. In June 2009, a Beijing court affirmed his arrest for “inciting subversion of state power.” He was tried and convicted in December. He was sentenced to 11 years in prison. Liu’s drafting and publishing Charter 08 on overseas websites were among the charges against him.
“I have no enemies” is a statement Liu hoped to give at his trial. He was not permitted to do so, but it was circulated later.
“I have no enemies, and no hatred. None of the police who have monitored, arrested and interrogated me, the prosecutors who prosecuted me, or the judges who sentence me, are my enemies. While I’m unable to accept your surveillance, arrest, prosecution or sentencing, I respect your professions and personalities ….
“For hatred is corrosive of a person’s wisdom and conscience; the mentality of enmity can poison a nation’s spirit, instigate brutal life and death struggles, destroy a society’s tolerance and humanity, and block a nation’s progress to freedom and democracy. I hope therefore to be able to transcend my personal vicissitudes in understanding the development of the state and changes in society, to counter the hostility of the regime with the best of intentions, and defuse hate with love....
“I do not feel guilty for following my constitutional right to freedom of expression, for fulfilling my social responsibility as a Chinese citizen. Even if accused of it, I would have no complaints.”
No Enemies, No Hatred became the name of a volume of Liu’s writings published in 2012. 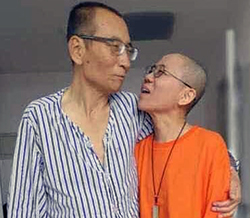 The Chinese government locked Liu Xiaobo up, put his wife Liu Xia under house arrest, and limited their contact with each other and with the outside world. But Liu Xiaobo was not forgotten.
On October 7, 2010, Yu Jie 余杰  a Beijing friend of Liu’s and himself a prominent author and activist, was speaking at USC. Yu noted that the announcement of the Nobel Peace Prize selection would soon occur. He said that it didn’t matter if Liu Xiabo was selected, what mattered is that more Chinese follow Liu’s example to live, think, and write freely. In this, Liu and Yu were again inspired by Vaclav Havel, who in 1978 wrote “The Power of the Powerless” about deciding to not “live a lie,” that is to yield to the demands of the oppressor by voting in farce elections and speaking not from one’s heart, but in accord with the expectations of the government. Havel, Liu, and Yu all chose to live as free men, to say and write what they thought, “to live a truth.” While Liu was serving his first prison sentence, Havel became the first post-communist president of Czechoslovakia.
At about the time Yu Jie was speaking, the Nobel Peace Prize Committee, headed by Thorbjørn Jagland, a former Norwegian prime minister, announced that prisoner Liu Xiaobo was their choice for the award. It said,
“Over the past decades, China has achieved economic advances to which history can hardly show any equal. The country now has the world's second largest economy; hundreds of millions of people have been lifted out of poverty. Scope for political participation has also broadened.
“China's new status must entail increased responsibility. China is in breach of several international agreements to which it is a signatory, as well as of its own provisions concerning political rights. Article 35 of China's constitution lays down that 'Citizens of the People's Republic of China enjoy freedom of speech, of the press, of assembly, of association, of procession and of demonstration.' In practice, these freedoms have proved to be distinctly curtailed for China's citizens.”
The committee noted that for two decades Liu Xiaobo had called for China’s government to honor and protect the rights of Chinese citizens. China’s government condemned the award and refused to let Liu or his wife travel to Norway in December 2010 to receive the award. Liu was represented there by an empty chair. China pressured countries to stay away from the ceremony and nineteen did. Forty-five attended. China acted to punish Norway economically for the award. Norway had dominated the salmon market there with a 92% market share. That plummeted. Some estimated the cost to Norway at $1 billion a year. Last December, the Norwegian foreign minister visited Beijing and the two countries announced that a diplomatic thaw. The joint statement said,
“The Norwegian government reiterates its commitment to the one-China policy, fully respects China's sovereignty and territorial integrity, attaches high importance to China's core interests and major concerns, will not support actions that undermine them, and will do its best to avoid any future damage to the bilateral relations."
Five years ago, a Chinese citizen finally won a Nobel Prize that China would brag about. Novelist Mo Yan was chosen by the Swedish Academy to receive the Nobel Prize in Literature. Perry Link, translator of Charter 08 and co-editor of Liu’s No Enemies, No Hatred, told “A Tale of Two Nobels” at USC in 2013. Link detailed the very different experiences and intellectual development of Liu and Mo. He noted that Liu understood that others might quite reasonably choose to work within the system. Link noted, though, that Mo, in several ways had elected to reinforce China’s censorship regime, for example through his participation in writing out by hand part of Mao’s 1942 speeches on art and literature (seen as the basis for restricting what writers and artists might do) to commemorate their anniversary.
Liu’s passing is being reported around the world. When the gravity of Liu’s illness became public, however, the only prominent national leader to speak out was Germany’s Angela Merkel. She called for China’s leaders to signal their humanity by permitting Liu to leave China for treatment. China’s leaders elected to not do that, perhaps fearing that Liu would die abroad and his remains would become a gathering point for critics of the party-state.
U.S. President Donald Trump didn't raise human rights concerns during his April or July meetings with Chinese President Xi Jinping. At a joint press conference in Paris a few hours ago, Trump praised Xi saying, "He's a very talented man. I think he's a very good man. He loves China, I can tell you." He noted that he hoped China would do more to help with North Korea and that the two countries made progress in resolving trade issues. French President Emmanuel Macron highlighted Xi's support for global trade and for the effort to mitigate climate change. A bit later, U.S. Secretary of State Rex Tillerson released a statement, “I join those in China and around the world in mourning the tragic passing of 2010 Nobel Peace Prize Laureate Liu Xiaobo, who died while serving a lengthy prison sentence in China for promoting peaceful democratic reform. Mr. Liu dedicated his life to the betterment of his country and humankind, and to the pursuit of justice and liberty.”
Below are links to various resources on Liu Xiaobo.