This was reviewed by Claudia Baumann in May, 2013 for the H-Soz-u-Kult discussion list and is reproduced here under Creative Commons license.
January 1, 2013
Print

Gracia Liu-Farrer is an Associate Professor at the Graduate School of Asia Pacific Studies in Waseda University, Japan. The book, which was published in 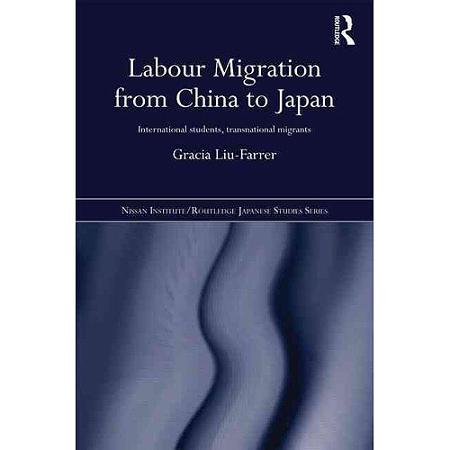 the Nissan Institute/Routledge Japanese Studies series, is the culmination of an eight year dissertation project that was submitted to the sociology department at the University of Chicago. In the Japanese Studies series authors attempt to shed light on all facets of Japan, ranging from historical and economic developments to the establishment of the constitutional system and banking policies as well as culture, literature and language. This edition features societal aspects; more precisely it focuses on the 400.000 Chinese students who have come to Japan since the early 1980s.

The central argument of Farrer's work is that international education is an important channel of global labour migration, and that international students are increasingly important actors in the global economy. To demonstrate her point she utilizes a microcosm of 123 interviewees in the greater Tokyo area during the years 2002-2005, supplemented by the feedback of 218 respondents to a questionnaire.

Reflecting on the relevance of this specific place for her study, she argues that Tokyo as a global city does not only attract the majority of students from abroad, but also offers the biggest labour supply. In addition to her research in Tokyo she spent time in Shanghai and Fujian, the two main regions of origin for foreign students, as well as destinations for returnees.

Farrer acknowledges that international education is a new channel of labour migration, in which people must pass certain way-posts before gaining full access to the labour market. In describing this process, Farrer includes anecdotes of the student lifecycle, including immigration motives, visa regulations, social life, part-time work, entry in Japanese firms and transnational entrepreneurship.

She first highlights that Japan has been a popular destination for Chinese students in the past due to geographic proximity, cultural affinity, and relatively low migration costs. A mutual cultural exchange and transfer process has long been ingrained in societies, bringing to Japan the art of tea or making combs for example, as well as western tailoring, gas lights and hair styles. Migrants from China at the end of the 19th century were merchants, artisans, skilled workers. Between 1896 -- when the Chinese government decided to send students to Japan to acquire modern scientific knowledge, military technology and social skills -- and 1945 when World War II ended, tens of thousands of students had made their way to Japan. World War II was followed by what Farrer describes as 30-year ice age where almost no transnational activities could take place.

In 1979, one year after the peace treaty between China and Japan was signed, the two countries resumed relations and launched educational exchange programs. The Japanese government encouraged student migration, launching a plan to attract 100.000 foreign students. A revision of this plan was announced in 2008 which targets an overall number of 300.000.

Farrer observes that during the 25 years she covers, an institutionalization of student migration emerged, in which profit oriented agencies facilitate the access to visa and education institutions in Japan. The mushrooming of these agencies forced the Chinese government to regulate the education brokers. The latest trends, however, show that the demand for these agencies has declined as students increasingly handle these matters online where the experience of previous students is shared. Furthermore, the majority of students coming to Japan joined one of the numerous language schools prior to university enrollment. Only a small number were able to join higher education institutions right away. The most common path students had to follow was first language school, then vocational school and if possible college or university.

An important consideration is the fact that Chinese students often also needed to work, mostly in low-wage sectors such as restaurants, factories, construction sites, supermarkets or entertainment venues to pay their tuition, agency fees and living expenses. Although Chinese students were prepared to eat bitterness when embarking on their life change in Japan, the challenges they encountered often exceeded expectations. Farrer clearly demonstrates the overburdening role of unskilled labour in students lives, but seems to miss how that undermines her central argument. While individuals may have entered Japan via an educational channel facilitated by student visa programs, the time and energy they spend on work however reduces the actual in class-education to a fairly small amount. Part time work as a term in this context is hardly appropriate. This is at least true for what Farrer describes in the 1980s, 1990s and the beginning of the 2000s.

Recent trends suggest that Japan-bound students have more favorable financial backing. The financial burden is also one of the main reasons why a disproportionately large number of Chinese students overstayed their visas. The debts accumulated over time can only be paid back by continuing work, which is why many students decide to go black-- thus entering into illegal status.

Focusing on the working experience of Chinese graduates, Farrer summarizes that most are employed primarily because of their linguistic and cultural backgrounds, working in transnational businesses between Japan and China. They face institutional, structural, and cultural bias, which is often described as insurmountable wall. At the same time, however, the big demand for bilingual and intercultural skills has improved Chinese graduates bargaining power. The fact that they are needed and have been an integral part of the society for quite some time has started to change the Japanese society from within. Particularly noticeable is that Chinese women have carved out career possibilities for themselves that were previously unimaginable for Japanese women.

Farrer's book is a much needed study of a transnational scene that has been underrepresented in international labour and student mobility studies. The mix of statistics and individual stories reveals the ambiguous nature of student migration. It is on the one hand a helpful vehicle to fulfill personal and professional ambition but can, on the other hand, end in the exact opposite -- financial and physical deprivation. Her study also reveals that while government prescribed student migration to cater to the needs of the labor market is not a recent phenomenon, it has increasingly gained importance. Student mobility can function as a way towards transnationality and plays an important role in the global economy.

As much as Farrer's work is a valuable and knowledgeable contribution to current research, it must be noted that the transnational in this study is slightly imbalanced. The focus lay upon the experience of Chinese students in Japan and some returnees to China. There is, however, no reflection from the Japanese perspective and their relationship with the student influx. This imbalance is a rather powerful methodological constraint that deserves attention and not marginalized in Appendix A, where the author belatedly reveals in one sentence that she grew up in Shanghai. In a study based on the set-up of personal networks and close inter-personal relations, the authors self-reflexivity is a must since no one has ever devised a method for detaching the scholar from the circumstances of life, from the fact of his involvement (conscious or unconscious) with a class, a set of beliefs, as social position, or from the mere activity of being a member of a society. Edward W. Said, Orientalism, New York 1978, p.10.