Lin, Libraries and Librarianship in China, 1998

Gateway to Understanding Libraries and Librarianship in China 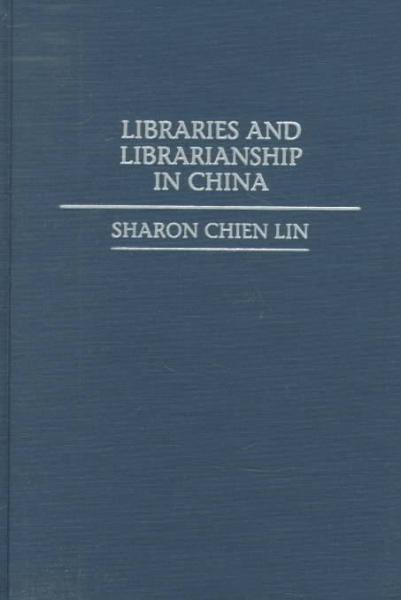 There are a number of features of Libraries and Librarianship in China that make it attractive, among them its systematic and comprehensive nature. Lin tells us, "I have tried to present a more systematic description of the development of Chinese libraries and librarianship," and "I have attempted to make this work comprehensive" (pp. xviii, xvii); in fact, she has not only completed her mission, but also has done a remarkable job.

A Chinese saying in historical research goes, "Stress the present, not the past." Sharon Chien Lin places the emphasis of her description of the development of Chinese libraries and librarianship on their progress after 1976, and she has included a brief account of the development prior to 1976 as well, maintaining a proper balance in the relationship between the history and the present condition of Chinese libraries and librarianship.

The second attractive feature of the book is the authenticity of its information sources. Sharon Chien Lin is a Chinese-American; she is good at both English and Chinese, so she is able to use information sources both in English and in Chinese with ease. On the other hand, she is not an armchair strategist but a person of action, just as she said in this book: "Nearly twenty years ago, in 1978, I had the opportunity to spend three months at the Qinghua University Library. In subsequent visits to China, I visited over two dozen Chinese libraries. With the exception of host libraries, I generally spent two to three days at each library engaging in lectures and discussions on various issues with librarians and library educators. Through these visits, I gained a general knowledge of the operation and philosophy of Chinese libraries" (p. xvii). In fact, through those visits, she not only gathered a quantity of original information, but also established good academic relations with many leading Chinese library professionals, which is very helpful to her research on this subject.

Certainly, Libraries and Librarianship in China is not a library study tour report but a research work. So Lin has laid stress on investigation and study of all kinds of sources, and has handled those sources very skillfully. For example, the statistics in this book were collected from many sources and better serve as an indication of trends of growth within individual tables; for the sake of the smooth flow of text, transliterations are generally avoided when feasible; English terms are used when available or provided otherwise; and, to facilitate interested readers in correct reference to the original documents, a list of English translations of Chinese names is provided in Appendix B.

Frankly, however, this book has defects as well as merits. First, most Chinese readers will not agree with Lin's political point of views on the "two Chinas." For example, she says that "The discussion of Chinese libraries and librarianship in this book is limited to the People's Republic of China (PRC) on the mainland; there will be a separate book dealing with the situation in Taiwan, the Republic of China" (p. xx) and that the "Republic of China (1912- ) moved to Taiwan in 1949" (p. 2). Certainly, her views that "the June 4, 1989, Tiananmen Square incident curtailed the progress of libraries and library research" (p. xxi) are not objective and true. Second, there are a few mistakes in this book; for example, "Japan invaded China in 1937" (p. 10) and "In 1937, China was invaded by the Japanese" (p. 31) are not accurate, and should read "the War of Resistance Against Japan (1937-1945) started in 1937." The years in the sentence of "the so-called Culture Revolution, which started in 1965 and reached its peak in 1966" (p. 16) and the numbers in the sentence of "The PRC is divided into thirty provinces, five autonomous regions, and three special municipalities" (p. xx) are not correct. By the way, my name is of course not "Chen Huanwen" (p. 26).

Anyway, just as a Chinese saying tells us, "one flaw cannot obscure the splendor of the jade," this book is still the best one in this field. In conclusion, I quote the evaluation of Professor Ching-Chih Chen, one of the leading library professionals in the world, on this book: "This book greatly facilitates our search for information related to topics covered and should be of interest to anyone interested in Chinese and comparative librarianship. I applaud Sharon's effort with great enthusiasm" (p. xv).