This book is a cultural history of female infanticide in China, especially focused on but not limited to the nineteenth century. It is illustrated with numerous fascinating reproductions of vivid Chinese drawings relevant to the subject matter, drawn from various archives, including the author’s personal collection. Michelle T. King begins the introduction with the story of the drowning of an eleventh-century newborn girl in what is now Hubei Province; then she mentions the Chinese sex ratio at birth from the 2010 census, 118 males per 100 females. The author avers that sex-selective abortions and the One Child Policy “have merely amplified the effects of a long-standing societal preference for sons, derived from a traditional Confucian value system” (p. 2). A thousand years are compassed in the two paragraphs ending in this statement. Yet changes in the reasons for son preference shown in the book prove to be quite dramatic.

Infanticide was and continues to be found in other societies, but China became powerfully and critically identified with it by Western societies 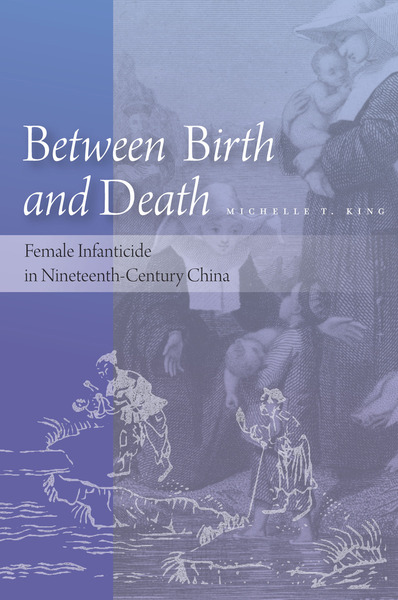 in the nineteenth century. King chooses to frame her book as a study of “the changing perception of female infanticide in Chinese history, rather than its practice” (p. 3). The Confucian model that underlay (and that perhaps she would argue still partially underlies) the practice was one in which sons provided old-age support and remained with parents, while daughters needed dowry and were bound for husbands’ homes. Deformities and extreme poverty were other reasons for killing children of both sexes.

In two studies, cited by King, historical demographer James Lee and his colleagues calculated historic rates of female infanticide as between one-fifth and one-fourth of all female births in Liaoning Province between 1774 and 1873, and up to one-tenth even within the Qing royal lineage between 1700 and 1840. Making painstaking, cautious estimates, restricted to manageable administrative units, they wrote about infanticide as a form of birth control found in a premodern society with uncontrollably high fertility. Although it is clearly shown in King’s book that nineteenth-century and later foreign perceptions of Chinese infanticide were indeed biased and condemnatory and racist, still the reality of female infanticide in China was enormous. And its successor, sex-selective abortion, still is.

Unwanted children were historically a social problem worldwide, and children were abandoned at high rates in Europe, too. Was the Chinese form of infanticide particularly barbaric? In the nineteenth-century imperialist context after the Opium War of 1839-42, infanticide became viewed by the West as a central Chinese custom, marking China out for moral condemnation. Yet nineteenth-century Chinese sources were uniformly against it; this important point is one of the main thrusts of the book.

King believes that numbers tell us little about infanticide that is really worth knowing, because they give us no sense of the multilayered social and human drama involved. A “newborn daughter was ... surrounded by a wide array of historical actors interested in her fate: the mother, midwife, mother-in-law and other female neighbors and relations,” as well as others more distant (p. 10). The first two chapters provide both stories and arresting pictures illustrating the plight of women, especially those who were poor.

In the first chapter, discussing such practices from long before the nineteenth century, the author provides essential cultural background to counter the abusively anti-Chinese views later found among Westerners in the nineteenth century. She tells a story of a sixteenth-century woman who drowned her first daughter, and describes her many roles, worries, and great regret later in life. Her family was terribly poor, and her life was lonely and hard. Things later turned out as they should when she did have sons. It was not the case that daughters were never wanted: “A daughter could indeed be a cherished child, particularly in elite families” (p. 20). Accounts of both fathers and mothers who doted on their daughters and of loyal daughters who were devoted to their parents are offered. The central goal of reproduction was to have a son, but opprobrium was attached to those who colluded in female infanticide. The blame for a daughter’s death was not focused on the mother alone; female assistants were seen to exert pressure on the birth mother. The “apportioning of responsibility across a wide group of participants is distinctive from the typical portrayal of infanticide in Europe during the same period, where mothers alone bore the brunt of the blame” (p. 27).

King next delves into the sources for understanding the moral dimensions and dilemmas of these acts in late imperial China, before the Western intrusion. The second chapter provides a vivid picture of Confucian Chinese reformers who ardently tried to stem the practice through their writings. Their texts called morality books, the earliest being from the twelfth century, “shared the same basic universal creed of karmic retribution,” which would inevitably be meted out as punishment (p. 27). Yu Zhi, 1804-74, a country schoolteacher and philanthropist, is the exemplar of this group; his story as a devoted and prolific reformer on a broad array of issues overlaps the beginning of the imperialist period.

In chapters 3 and 4, moving back and forth from China to Western countries, we discover detailed sources of the increasingly disparaging view from the West in the nineteenth century: “Western writings shaped the perception among worldwide audiences that female infanticide was a totemic marker of Chinese society” (p. 10). However, footbinding, judicial torture, and deforming illnesses were also tropes of the Chinese body that helped exoticize the culture to a horrified yet fascinated Western audience. The exoticizing urge in the Western gaze, as well as a defamatory one rationalizing both imperialism and intrusive missionizing, helped form the motives of the Jesuit priest Gabriel Palatre, who compiled a set of influential, much reproduced but very erroneous, “statistics” about the practice of female infanticide, published in 1878. We learn about European and Canadian Catholic schoolchildren inculcated into the Oeuvre de la Sainte-Enfance, formed in 1843 to support missionaries by tugging at Western children’s heartstrings about abandoned Chinese babies so that they would each contribute a tiny donation.

In chapter 5 and the conclusion, we find ourselves in the twentieth and twenty-first centuries, comparing what happened in China’s pre-revolutionary history with what has transpired since. In chapter 5, we see Chinese people at last violently opposing Catholic missionaries and their orphanages, accusing them of kidnapping and killing Chinese children for nefarious reasons. The Tianjin Massacre of 1870, in which twenty foreigners were killed by a mob inflamed by such suspicions, King sees as a proto-nationalist movement. The conclusion then brings us beyond the Chinese Revolution and into the recent past, and shows how the story continues on into the realm of the One Child Policy.

This most recent time period is itself vividly historical and rich with change. King’s references to historical demographers are scanty for this period; such dramatic modern material may have been an afterthought to a dissertation couched as a cultural history focused on the nineteenth century. But the work of Monica Das Gupta and her colleagues has added greatly to our understanding of the social roots of gender bias and its mortality outcomes during recent times. Das Gupta and Li Shuzhou have written about this topic on the decades from 1920 to 1990 in China, as well as elsewhere.[1] These works are focused on how kinship systems, old-age support expectations, and the property relations that underlie them help to explain the deadly bias against girl children, and examine the ways this whole system has begun to change. It is a focus that has benefited greatly by collaboration between anthropology and historical demography.

King’s work, in spite of much reference both to poverty and to modern population policy, is not very analytical of the social structural causes of gender discrimination. Her book is vivid, however, on the cultural and political framework of these issues, even up to the near present, where she tells one more wrenching story, from 1989, of a baby girl thrown into the trash. The explanation given in an interview is interpreted in the following way: “girls are not counted in the government allocation of farmland, such that there is no way a family can afford to raise a girl, who would otherwise starve anyway” (p. 180). Her argument at the end of the book is strongly in favor of understanding individual families’ motivations for these actions.

But families in areas that have been identified as particularly vulnerable are now being assisted, as she tells us, by such programs as the Care for Girls program, which the Chinese government initiated as a pilot in 2000 and has since extended nationwide, county by county, to hundreds of counties (p. 185). One may hope that such efforts will continue to grow and to address, on as truly massive a scale as the problem inhabits, the underlying structural, as well as cultural, constraints on the improvement of life chances for girls.