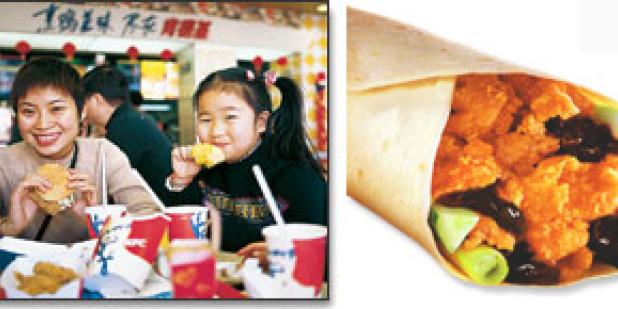 ON AN AVERAGE DAY IN CHINA 2,739 children celebrate their birthdays at a KFC. KFC now has nearly 2,000 restaurants in over 400 Chinese cities. KFC's popularity with children and their parents is a big reason for its rapid growth since opening its first Chinese restaurant in 1987.

Yum! Brands owns KFC. Its China Division (which includes Pizza Hut and Taco Bell restaurants as well as KFC and includes operations in China, Thailand, and Taiwan) produced US$290 million in operating profits in 2006. And sales are rising. In the first quarter of 2007, Yum! Brands reported that same-store-sales in China grew by 9%.

As the forerunners in the fast food revolution, American fast food chains have created an indelible mark on fast-paced societies, here and around the globe. McDonald’s, Burger King and KFC are just a few of the billion dollar fast food empires that have emerged in America and abroad over the past 40 years. KFC is China's largest restaurant chain. According to Research Frontiers, a research support program with the University of Arkansas, Americans consume an astounding 54 billion meals yearly, including meals at table service establishments, such as Friday’s and Applebees. But is this love affair with fast food only playing out in the United States?

For quite some time news programs featured stories that highlighted the frequency with which American families eat out.  And for quite some time, many Americans were the only ones that were in love with fried chicken, french fries, burgers, pizza and all those other great comfort foods. Yet this could not be further from the truth.

AC Nielsen Consumer Confidence and Opinion Survey, conducted a survey in late 2004 which included 28 countries across Asia-Pacific. Of those 28 countries, China fell in the top five. Xinhua news service quotes Glen Murphy, the Managing Director of AC Nielsen China as arguing, “Fast food appears to have become a staple of diets in China, as it is now in many other Asian Pacific countries.” In China, 30% of those surveyed in the AC Nielsen survey ate at fast food restaurants two to three times a month; 21% of respondents ate once or twice a week and 11% three to six times per week. These numbers definitely show that the love affair with fast food is not all that different from that of Americans.

So what are the causes of this love affair? Well, on average, Americans as well as Chinese are spending less time at home which leaves less time to prepare food. In China particularly, a new generation of two income families, rapid changes in Chinese diet structure and lifestyle, as well as China’s rapid economic growth has created a reliance on fast food establishments. It is a luxury to enjoy a meal out for many Chinese and American families. However, due to the increasingly demanding and hectic lives, fast food chains have become a needed and appreciated luxury for both Chinese and Americans alike.

Tenja Young received her Master's from USC's School of Policy, Planning, and Development and the School of International Relations.