Kang, East Asia Before the West: Five Centuries of Trade and Tribute, 2010

A scholar in one discipline can pay no greater compliment than to devote an entire book to the findings of another. David C. Kang’s opening is utterly accurate: “This is a book of political science, not history. The key element of historical research is the use of primary documents.... 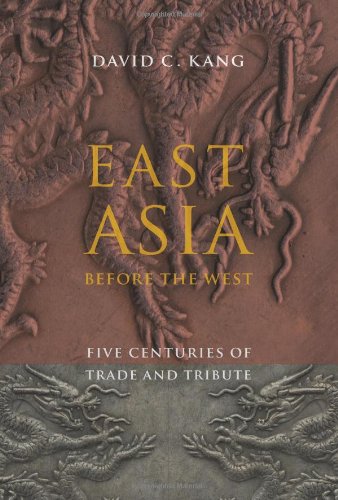 Rather I relied upon a careful reading of the most recent and important secondary historical literature about East Asian international relations, trade, and domestic policies” (p. 1). Although intended (and priced appropriately) as a book for beginning international relations students and their instructors, this book succeeds wonderfully as an extended bibliographic essay on the tribute system from 1368, the year of the Ming dynasty’s founding, to the 1841 Opium Wars between Britain and China.

Drawing on the work of Liam Kelley, Gary Ledyard, Peter C. Perdue, and Jack Wills, Kang, a professor of international relations and business at University of Southern California, provides a cogent defense of the tribute system, particularly in chapter 4. Even though historians tend to treat it as a fiction, he notes, China, Korea, Vietnam, and Japan all participated in the system, and no one ever went on record to mock it. The unequal system kept the peace--in sharp contrast to the 1648 egalitarian Peace of Westphalia governing European international relations in the same time period.

The author has read widely and well in the fields of Chinese, Korean, Japanese, and Vietnamese history, with few omissions. Curious is Kang’s decision not to cite John King Fairbank’s field-defining model of tributary relations as presented in his 1968 edited volume The Chinese World Order. In fact, though, Fairbank’s influence is clear. Like Fairbank, Kang refers to the countries that have absorbed Chinese culture as Sinic, but where Fairbank distinguished between an intermediary “Inner Asia” and an “Outer Zone,” Kang sees a broader “nomad” area.

In fact, little supports such a sharp distinction between the Sinic and nomad zones. The Manchus, whom Kang does include in the nomad camp, offer a telling example of a non-Chinese people who absorbed the ways of the tribute system immediately. Earlier non-Chinese regimes, whether the Kitan Liao or the Jurchen Jin, also mastered the intricacies of the Chinese system within a few years. Most interesting, perhaps, are the peoples far removed from the Chinese world order, like the Kitan and the Ghaznavids, who used the tribute system in the tenth century to manage their foreign relations. See, for example, the 1024 letter from the Kitan emperor Shengzong to Mahm?d of Ghazn? in Afghanistan proposing that they exchange gifts and envoys, which survives only in an Arabic version.[1]

The author recognizes only a few outbreaks of violence over the course of nearly 500 years (chapter 5): the most important is the Imjin War of 1592 when a Japanese force of 500,000 led by Hideyoshi attacked Korea, which, allied with China, formed an army of 160,000 Chinese and Korean soldiers.[2] Even though the Imjin War involved at least ten times as many soldiers as the defeat of the Spanish Armada (which involved a total of 50,000 British and Spanish troops), scholars of international relations remain utterly ignorant about it. Kang argues persuasively that this is the only the major departure from peace during the five centuries under study.

Defining a war--as opposed to a skirmish, say--turns out to be more difficult than one might expect. The author analyzes a chronological table entitled Zhongguo lidai zhanzheng nianbiao that lists 672 wars between 1368 and 1842 (compiled by the People’s Liberation Army in 1985 and available on the web at: http://warstudy.com/history/general_history/dynasty_war_list/index.xml--or in English by emailing the author who has transferred the list to an Excel document). The author is too sharp to take this list at face value, but the table gives him to chance to examine the various outbreaks that occurred. Ultimately, though, he concludes that only six “major wars” matter: Hideyoshi’s invasion of Korea, the Chinese invasion of Vietnam, 1407-28, the Manchu conquest of China, 1618-44, the Manchu invasions of Korea in 1627 and 1637, the Chinese conquest of Xinjiang, 1690-1757, and the Opium Wars, 1839-41, which provide the closing date of the book (table 5.1, p. 83).

In arguing for the strengths of the tribute system, Kang notes that that it successfully regulated trade, both formal exchanges of gifts and the under-the-table exchanges that went along with it. Understandably in a book about the strengths of the tribute system, he does not ask about its limits. Still, it’s clear that the tribute system had no means of recognizing any change in the relative power of different countries. Only war could do that. The victors in war could draw new borders and then the newly configured powers could once again exchange envoys. This is the major reason for the many wars of the Song dynasty as first the Kitan and then the Jurchen sought to demonstrate their superiority over the Song.

The book ends with an argument as intriguing as its point about the resilience and the success of the tribute system: even though East Asian governments today constantly bicker and sometimes war over their historic borders, especially maritime borders, this is actually a new development. In the past, they had some disputes over land borders (the author considers the Korean-Chinese and the Chinese-Vietnamese borders), but never over maritime borders, which they had no way of measuring anyway. Kang contrasts the success the Korean and Japanese governments had in handling Tsujima (the island that lies between Japan and Korea) with the silence in the historical record about Dokdo/Takeshima, a small and insignificant island.

Listen to what Kang has to say about the difference between today’s border disputes and the past: “The debate is over how history is remembered and characterized in the present, and it is merely the most obvious indicator for how Japan and its neighbors view one another, themselves, and their roles in the region. Indeed, the issues would be much easier to solve if they really were about history: just find better historians and archeologists. But while history is the proximate cause, it is the underlying mistrust between the neighboring countries about not only the intentions of other states but also their underlying identities that is the real cause of friction” (p. 154). Kang’s distinction between proximate cause and real causes echoes the work of a much earlier Greek historian, Polybius (ca. 200- ca.118 BCE), who charged historians with distinguishing among pretexts, beginnings, and genuine causes.

This consistently intelligent book ranks high on my list of books to recommend to students and colleagues who want to learn more about East Asia. Along with Alexander Woodside’s Lost Modernities: China, Vietnam, Korea and the Hazards of World History (2006), it is one of the most stimulating books to appear in the past decade. Clearly focused on the big picture, the author’s courageous arguments will invite all area experts to see their home fields in a new light. In sum, this is the perfect summer reading--at least for readers of H-Asia.