Johnston and Ross, Engaging China: the Management of an Emerging Power, 1999

A more accurate title for this book should be "How the Asia Pacific region and the U.S. respond to the rise of China." In this book, the Asia Pacific region includes six powers: Japan, Singapore, Taiwan, South Korea, Malaysia and Indonesia. "In particular it explores the pressures that influence the choice of options and strategies those states can make in managing the uncertainties of a rising power" (front page and back cover).

I have to admit that some of the core concepts used in this book confuse me. One would translate the word "manage" to "guanli" in Chinese, "kanri" in Japanese without hesitation, but the concept "managing China (by foreign or international powers)" makes no sense in Chinese, nor in Japanese. Back in 1945, even the four greatest world powers (the US, the SU, the UK, plus the Jiang Jieshi/KMT/ROC regime) could not "manage" China, how could somebody still talk about such topics as "Singapore managing China" in a serious scholarly book? After reading the book, I understand that the authors are discussing "managing various concerns regarding China's rise." For readers, such as I, who are not familiar with the political terminology of "engagement," the editors define it as: "The use of non-coercive methods to ameliorate the non-status-quo elements of a rising major power's behavior. The goal is to ensure that this growing power is used in ways that are consistent with peaceful change in regional and global order" (preface).

I need not apologize for any language obstacle I face as a non-native speaker of English when I frequently encounter, in this book and in many other English writings, the misuse of the ROK (South Korea) as Korea, with (or without) the intention to ignore the existence of the DPRK 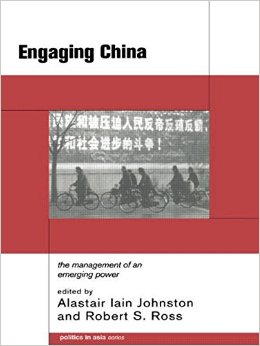 (North Korea), and the misuse of Taiwan" to designate a country or a state. This kind of biased usage prevents us from serious thinking on the sophisticated and sensitive issues raised in this book.

Chapter 1 "Managing the rise of great powers: history and theory" by Randall Schweller serves as a theoretical background to the issues as well as guidelines to other chapters. I have wondered at how little most abstract theories in international relations contribute to understanding the political reality in almost every particular case, and this chapter confirms my doubt. With 97 notes, this lengthy chapter mentions little about China. It seems that, as an edited collection, the editors need a theorist to help determine this book's "engaging" rhythm.

Despite the limits of the opening chapter, the subject itself, of contemporary responses from the above powers toward China's rise, is rich enough to explore. Although the quality varies, most authors in the following chapters provide informative explanations of these countries' China policy.

Victor D. Cha (Chapter 2 "Engaging China: the view from Korea") and Yuan Foong Khong (Chapter 5 "Singapore: a time for economic and political engagement") treat South Korea and Singapore's China policy as a kind of "successful engagement." This is understandable, and the reason is clear and well known: while militarily allied with the US [1], South Korea and Singapore do not challenge China's "vital interest" on Taiwan.[2] Understanding and respecting China's stance enables Lee Kuan Yew to keep a close relationship with most Chinese leaders. Hence Singapore became the host of the historical meeting between China's Association for Relations Across the Taiwan Straits (ARATS) and Taiwan's Straits Exchange Foundation (SEF) in 1992. Hence Lee's advice to the United States and those serious about engaging China is: "accept that both Tibet and Taiwan are part of China and stop challenging this reality" (p. 123).

As one of the two divided nations in the world, South Korea understands China's unification issues well. Cha only raises a potential conflict between a united Korea and China over the two million ethnic Korean population located largely in China's Jilin province. He does not mention the fact that the ethnic Koreans do not receive discrimination in China (as they do in Japan). Cha's concern depends on when and how the Korea will be united. It will be a problem between a united Korea and China if the US forces continue to stay in the peninsula (as Washington hopes) which means that the Yalu River becomes the only direct border between the two greatest military powers in Asia; otherwise, a united neutral Korea without any foreign forces (as Beijing supports) will first confront Japan. This book really should have a chapter on and from a North Korean perspective.

Malaysia and Indonesia do not challenge China on Taiwan either, and thus we see progress in economic cooperation and China's compromise on the conflicting territorial claims in the South China Sea between China and several ASEAN countries and the sensitive ethnic Chinese population issue. China highly values and utilizes Malaysia's independent and non-aligned international posture. With about 30 percent Chinese population and close economic relations with China, Amitav Acharya concludes: "Malaysia is willing to live with rising Chinese power as long as it does not become preponderate" (Chapter 6 "Containment, engagement, or counter-dominance? Malaysia's response to the rise of China," [p. 148]). "Mahathir has even argued that the rise of China should not become a justification for an American containment posture" (p. 131).

Michael Leifer explores "Indonesia's encounters with China and the dilemmas of engagement" (Chapter 4) until 1997 under the dictator, Suharto. Since Indonesia has transformed its China policy change under Suharto and the hostile (toward China) army still firmly controls the country [3], no dramatic changes are expected, and the discussion in this chapter is still valid. "China continues to cast a looming shadow over Indonesia's domain" (p. 97) but "China is not perceived as an imminent security threat in Jakarta" (p. 105). Actually, during the 1998 turbulence which led to the overthrow of Suharto, thousands of wealthy ethnic Chinese were attacked too. But this time the PRC government did nothing. By contrast, the Japanese government dispatched its Navy Self-defense Forces immediately to Singapore for the few Japanese at risk.

ASEAN's China engagement can be successful to some degree only when they are united (this book should have had a chapter of the Philippines). The most effective mechanism for presenting a united posture is the ASEAN Regional Forum (ARF) which was "created with China in mind, either as a principal or the principal reason for their existence"(p. 257). China has frequently observed that it is an invited participant in the ARF rather than one of the equal members. China also emphasizes that it shares with ASEAN the common principle of non-intervention in any other country's internal affairs. The principal reason for China's involvement in ARF is the Taiwan problem.

In contrast to South Korea and the ASEAN countries, the US engages China on a wide variety of Chinese internal affairs, and the core issue is the Taiwan problem. Robert S. Ross briefly surveys the contending US approaches to the rise of China, from the thwarting attempt to the accommodating acceptance (Chapter 8 "Engagement in US China policy"). He concludes that it is a "widespread recognition that the rise of Chinese power will be the result of indigenous economic trends that are largely outside of US control" (p. 181). This became an obvious recognition especially during the international sanctions against China after the 1989 Tiananmen crackdown. However, US Defense Secretary Perry warned China when two US aircraft groups were dispatched to the Taiwan Strait in 1996: "China is a great power in this area, but China should remember that there is the superpower in this area." This is a clear indication that the US is only willing to admit PRC's "legitimate interest" on Taiwan, while for China the Taiwan problem is an internal affair that permits no room to compromise. This is the core point in the US "engaging China" issue. It is not an exaggeration to say that, today, only the Taiwan problem could develop into a global catastrophe.

Since Japan's China policy is a China-Japan-US tripartite issue and Taiwan's mainland policy is also a Beijing-Taipei-Washington tripartite relationship, it may be appropriate to have chapters on Japan and Taiwan's China policies by American researchers. Micheal Honathan Green discusses "Managing Chinese power: the view from Japan" (Chapter 7), but he only introduces the view from the Japanese government, with Washington policymakers in mind as his chief audience (he is the only author from a think tank while all other authors hold positions in universities). Primarily citing the ruling LDP reports, Green explains Washington's long-time Japan problem: why won't the Japanese government (the ruling LDP) conform to Washington's policy of engaging/containing China? He cannot see that even having experienced great change after the 1989 Tiananmen Incident, the Japanese people are far from ready to engage China on behalf of the US, especially on the issue of Japan's former colony, Taiwan.

The end of Steven M. Goldstein's chapter ("Terms of engagement: Taiwan's mainland policy") states, "Acknowledgments: The author thanks the Chiang Ching-kuo Foundation for International Scholarly Exchange." I cannot expect new perspectives different from other English writings on this issue from writings by this kind of sponsors.[4] Is it really the US's vital interest to intervene in China's civil war over such a long span and with such a huge cost? If so, who in the US benefits from this? Without exploring these critical questions, most of the engagement issues become unilateral American wishes.

Alastair Iain Johnston and Paul Evans in Chapter 10 discuss "China's engagement with multilateral security institutions" in the context of some new developments. Much of this information no longer belongs to the realm of China's "state secret" and has also been revealed in the process of China's increasing involvement with international institutes.[5]

In general, this book summarizes a relatively rich set of empirical analyses. For students without much Asian knowledge, even though they can find much of the information from other sources, this book is still a good collection. Everyone can learn something from it.

[1]. Singapore has the closest military tie with the US among the ASEAN countries.

[2]. For China, the Taiwan problem is not a negotiable issue of "interest," but a principle that permits no room to compromise.

[3]. President Abdurrahman Wahid was ousted in July 2001 mainly because the Army abandoned him.

[5]. For example, Nautilus Institute has published some insightful papers in English from Chinese officers/researchers. See http://www.nautilus.org/.