This review by Andrew Oros was published by the History of Diplomacy discussion list.
March 1, 2016
Print

Will there be a major interstate war in Asia in the future related to China's remarkable re-emergence as a major player in the Asian region?  Jonathan Holslag thinks so. His latest book builds on related questions posed in his two earlier books--Trapped Giant: China's Troubled Military Rise (2011) and China and India: Prospects for Peace (2010)--in examining the unpredictable path and consequences of China's 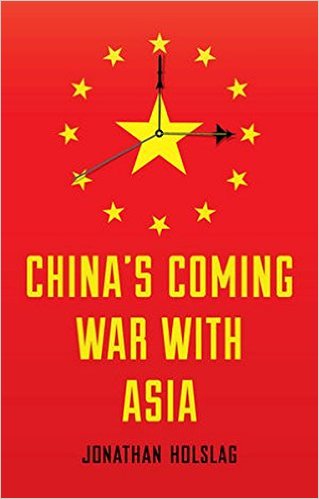 China's Coming War with Asia avowedly seeks to reach a more general audience, and thus includes a substantial amount of background history prior to China's re-emergence and generally dispenses with scholarly conventions of citing the contributions of other scholars to this debate (apart from in the first chapter) and sources for major empirical claims. The result is a solid primer for those new to the big--and important--questions raised in the book. The book also provides a very timely and readable account of the challenges China, the region, and the United States face related to China's rise.

A definitive answer to the core question posed in the book--whether there will be a major war in Asia related to China's rise--is, of course, unknowable. Holslag aligns himself with the offensive realism school of international relations theory, in particular John Mearsheimer (p. 15), to make his case that the very fact of China's spectacular growth creates a disruption to the status quo that will inevitably result in war. He is careful in his preface and first chapter not to blame China or Chinese decision makers for this disruption; rather, he states that he seeks to make a structural argument based on the concept of a security dilemma (p. vii). In his view, liberal approaches to managing the security dilemma will be insufficient to manage the scale of power shift the region has and will experience.

A central aspect of Holslag's argument about predicting China's future course is that--as with investment disclaimers we often hear--past performance is not a guarantee of future performance. He repeatedly states that we should not derive from China's numerous cases of cooperative and conciliatory approaches to regional conflicts and tensions an intention to act in a similar way after China becomes even more powerful in the future. This strikes me as somewhat of a paradox since at the same time another central aspect of his argument is to identify four long-standing objectives of the Chinese leadership that he does expect to continue to typify Chinese behavior well into the future, and, indeed, to spark the future war in Asia that he predicts.

Holslag writes at the outset of his first chapter that the book's "main argument is that China's important interests, its great aspirations as I call them, are incompatible with the idea of a peaceful rise in a complex Asian environment" (p. 2). The four "great aspirations" are (1) securing control over the so-called frontier lands just inside of China's current borders--"Yunnan, Tibet, Xinjiang, Inner Mongolia, and so forth" (p. 21); (2) that the Communist Party be recognized as the legitimate political structure for China; (3) obtaining respect for China's sovereignty by other states; and (4) recovering so-called lost territory--in particular Taiwan, the uninhabited Diaoyu/Senkaku islands in the East China Sea, maritime control within the Nine-Dashed Line perimeter of the South China Sea, and numerous other small land-border disagreements with India and others.

Although many pages of the book are devoted to explaining China's evolving foreign policy approaches under a succession of leaders--Mao Zedong, Deng Xiaoping, Jiang Zemin, Hu Jintao, and Xi Jinping--at the core, Holslag argues, "despite the changes in China's policy, it did not move an inch from its four great aspirations" (p. 107).

Where Holslag's analysis is right on the mark is his observation that "the status quo is not an option" (p. 16). Later he writes, "China has been a revisionist power by default" (p. 24) via even its innocent attempts at economic growth through new imports and exports and to secure its own borders. The old security order in the region is indeed no longer operative, largely because, as Holslag rightly notes, China's specular economic rise of the past three decades has fundamentally altered production networks in the region, greatly lessening economic reliance on the United States and Japan and creating new economic vulnerabilities to China. The old order where to most states in the region the United States provided both security and a market for exports has been half-eroded so that to many only security is the major provision, with China now providing the market. In this sense already the status quo is not the status quo, and there is little hope that the old order will be restored.

The author also rightly notes China's continued military weakness vis-à-vis the United States as one driving force of China's military modernization, in addition to the four aspirations around which his argument is centered. Indeed, the United States is framed as playing a critical role in whether--or rather how--a war in Asia will emerge. Holslag is strong at representing commonly heard Chinese views of how it is the United States, not China, that is destabilizing the region through its increased military presence both prior to and now as a result of the "pivot" (p. 149) to Asia (which is now referred to by the Barack Obama administration as the "rebalance" strategy).

Holslag argues that China's neighbors "are divided by geography, history, and economic interests" (p. 5) and thus that security cooperation to counter China's rise is unlikely. "This applies especially to Japan, Vietnam, and India," he writes (p. 5). It may indeed be unlikely, but in fact it is happening widely across the region to a notable degree, and in particular among Japan, Vietnam, and India--together with Australia and the Philippines, which Holslag himself notes in various places within his text (e.g., pp. 146-47). Developments since the book went to print provide further evidence of regional attempts to bandwagon--or at least hedge--against China.

Another way to consider this book is via the contributions of each of the nine chapters. More than half of the roughly 175 pages of text are devoted to a summary of China's development from the time of the Communist revolution in 1949 through the early 2000s--a story that has been told, better, in many other publications, few of which are cited in this book. The lack of citation is particularly problematic, though, where countries other than China are discussed--such as the brief forays into considering China's relations with South Korea, Japan, India, Russia, and numerous Southeast Asian countries. One factual error related to Japan--the mistaken claim that "Japan did not only participate in the Gulf War, polls also showed a majority of citizens willing to scrap the pacifist article nine from the constitution" (p. 73)--is especially striking given that scholars of Japan regularly make the exact opposite argument, something that would more likely have been revealed had the scholarly work of others been more carefully considered. Japan did not send troops to fight in the 1990-91 Persian Gulf War due to widespread public opposition and constitutional constraints, and that inability of Japan to do so created a bitter taste in the mouths of many Japanese conservatives who sought for Japan to play a larger military role and motivated their efforts to change Japanese military policy thereafter. Later in the book, when the author discusses what "experts" believe about Japan's future military modernization or economic prospects, the citation is to a Chinese source (p. 143).

This first half of the book does provide good background on South China Sea disputes in the 1990s (pp. 67-68), and other useful nuggets of context for the current challenges in the region. The discussion is selective, though, and assumes a lot of knowledge that one might think general readers would not possess.

The other half of the book, beginning with the preface and first chapter and continuing with the final three chapters, marks the original contributions of the book and development of the core argument of an impending war in Asia. Here the argument and evidence advanced are rather polemical, but accurately and succinctly convey the views held by many both in China and outside of China that a future conflict is inevitable. This latter half of the book is packed with interesting statistics on China's economic growth and trade with the region (though little of it is cited or dated, making them of use only to casual readers). This half also contains many claims about what China believes, sometimes attributed to Chinese the author spoke with at international conferences, but often left unattributed--perhaps based on polling data the author read, or an impression of what average Chinese seek based on personal interactions or reading of local media. (It is not clear from the book whether the author speaks or reads Chinese, though there are numerous Chinese-language footnotes that include English-language translations.) These latter chapters (especially pp. 150-63) also are strong on discussion of new weapons technology as part of the military competition especially between China and the United States and Japan (though, again, there are few citations to authoritative sources on this subject).

The book includes an interesting description of China's ideal future for the region, where "the China seas would be patrolled by a powerful Chinese navy, cheap workers from Vietnam would operate Chinese oil platforms, and Filipino waitresses serve Shandong Mary's or Beijing Bellini cocktails on new tropical resorts on the Spratly Islands" (p. 110). The final pages of the book spell out two more likely scenarios for China's future--one of muddling ahead with continued though slowed growth and the other of "China stuck in its bottleneck." Both of these scenarios ultimately lead to war, but for different reasons (p. 172).

Most would hope that Holslag is wrong, and that a future war in Asia will not emerge. The region has, after all, enjoyed two generations of interstate peace and growing prosperity, a positive model for elsewhere in the world. If war does break out, however, it likely would be the result of the factors that Holslag identifies. In this way, his focus on these issues is useful both for pessimists seeking to advance their case and for those who are seeking mechanisms to counteract the effects of the security dilemma in Asia and to achieve a lasting peace.

This work is licensed under a Creative Commons license.