China's rise at the end of the last century has triggered fierce debates among scholars and policy analysts about the country's new status as a great power and the impact of this possible power shift on the international system. China's International Roles contributes to the discussion by analyzing role conception and formation as well as changes in China's international roles. The theoretical foundation for this research lies in the interactionist approach described in chapter 1, which provides a theoretical basis for the following chapters. The essays address role theory and offer a deeper understanding of China's contemporary international roles. 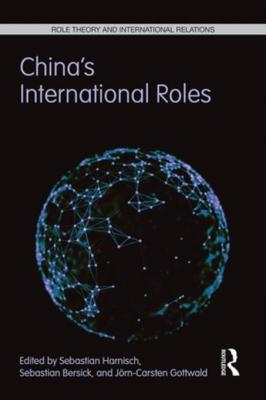 The book is divided into three parts. The first one focuses on theoretical explanations of China's acquired roles throughout history and in modern-world politics. The second part examines China's roles in international and regional orders. The last part is devoted to particular countries and regions, such as China's relationship to Japan and the European Union (EU). China's International Roles provides its own vision of China's rise and the ramifications in the global and regional contexts that engendered structural changes on three levels: global politics, relations with individual countries or regions, and China's role in setting international norms.

Like several other authors in the collection, Mikko Huotari notices that China tried to be recognized as a great power after the Global Financial Crisis (GFC) through "altercasting other countries in the region as potential followers in financial regionalism" (p. 156). Premier Xi Jinping's new model of great power relations in this regard also exemplifies the structural changes in the post-Cold War era that have been characterized by unipolarity, as many realists argue.[1] Unlike the followers of the realist paradigm, Yugang Chen contends that the main principle in relations between the two great powers is a "non-confrontational" approach; moreover, China "wants to keep its [international system's] basic order unchallenged" (p. 123).

In other words, the chapter challenges the realist power transition theory by stating that "one of China's main obligations [is] to guard and maintain the basic order of that [international] system" (p.122).

China's economic rise, as shown in the different chapters, was well accepted by numerous countries in and outside of the region. The country played a positive stabilizing role during two crises (the Asian financial crisis and GFC) and started promoting economic integration in East Asia and beyond through a number of investment projects in different countries. Although these ongoing projects have been quite successful so far, many of those countries are suspicious of and threatened by their larger neighbor; the phrase "cold politics, hot economics" describes not only Sino-Japanese relations but also China's relationship with other states, such as Vietnam, the Philippines, and India (p. 188). The cases of trade wars with the EU, described in Sebastian Bersick's chapter, also display "a new degree of assertiveness in the economic dimension of China's bilateral relations with the EU" (p. 239). All these examples provide a clear signal to the world that the People's Republic of China (PRC) has become "an enforcer of its own interpretation of international trade rules" and that national interests take precedence in China's strategic considerations (p. 240).

Consequently, China has begun to self-identify as a great power, shifting from "a recipient of the existing order, a role taker," to "an active subject shaping the rules for further economic globalization" (pp. 131, 128). Along with its "increase of ... absolute and relative power," China takes a new role of "increasingly assertive ... economic leadership" outside the already established Bretton Woods institutions "instead of providing leadership within" (pp. 227, 128). Concurrently, it enjoys the status of a developing nation that may potentially cause a role conflict between its identities as a great power and a developing country. This dichotomy can be explained by the Chinese philosophy, described by Yudan Chen in his chapter: "China rarely subscribes to certain fixed 'roles,'" therefore roles are mutually inclusive and "always adapting to a changing world" (p. 80).

As many authors in the collection emphasize, despite its rise as a great power, China desires to maintain stability in the international system and promotes equal and mutually beneficial relationships with all countries, including developed and developing nations.

Furthermore, the PRC has a unique philosophy, different from the Western perspective (as shown in Chen's chapter), as well as unprecedented historical experience and ensuing historical self-identification (as argued in Sebastian Harnisch's chapter); consequently, the grand strategy diverges from the US strategy (according to Chih-Yu Shih and Chiung-Chiu Huang's chapter). These aforementioned factors contribute to ongoing debates within China's political and academic circles and beyond the country. They also clarify the mismatch between domestic and external expectations resulting in misperceptions and misunderstandings by the outside world. The book offers an excellent overview of the country's role formation from a historical perspective. It also describes well the evolution of China's international roles from its economic rise and integration into the world economy as part of processes occurring due to changes in domestic and external expectations and altercasting.