Gruzinski, The Eagle and the Dragon - Globalization and European Dreams of Conquest in China and America in the Sixteenth Century (December, 2014)

Serge Gruzinski's book was reviewed by Ryan Holroyd for H-War and is published here under Creative Commons license.
June 11, 2015
Print

Serge Gruzinski’s The Eagle and the Dragon is built around the juxtaposed analyses of two curiously simultaneous Iberian adventures that took place in the early sixteenth century. Most readers will be familiar with the first of these, the conquest of Mexico by Hernán Cortés and his 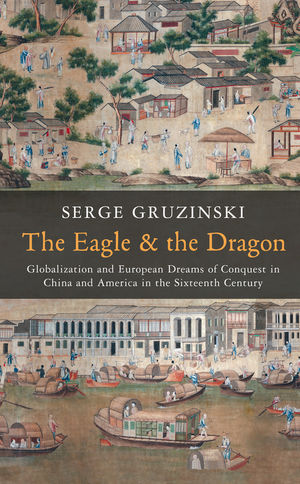 small troop of Spanish soldiers between 1519 and 1521, but the second one Gruzinski introduces, a Portuguese embassy led by the hapless apothecary Tomé Pires to Beijing in 1520, is less well known. In more traditional narratives of the early Spanish and Portuguese Empires, there were obvious reasons for scholars to heap attention on Cortés and relegate Pires’s venture to the dustbin of history. Where Cortés had spectacular success at capturing Tenochtitlan’s former domain and bringing central Mexico into the Spanish Empire, Pires’s embassy accomplished very little of immediate consequence for Portuguese empire building, and thanks to some piracy on China’s southern coast by his countrymen, Pires himself ended his life ignominiously in a Guangdongese prison. But for Gruzinski, bringing Pires’s ill-fated expedition in China side by side with the Spanish conquest of Mexico is a way of overcoming the constraints of these traditional national and imperial narratives in favor of a comparative analysis of the ways the two Iberian kingdoms encountered new civilizations.

What did these two episodes have in common besides their timing and the leadership of men who were brave to the point of foolishness? Gruzinski is reticent about addressing the purpose of his comparisons directly, but as the book’s dual narratives progress it gradually becomes clear that these are stories of incipient globalization. In the first decade of the sixteenth century, Ming China and Tenochtitlan-dominated Mexico were empires possessing vast populations that had developed in political and cultural spheres of their own, with little to no contact with either each other or Europe. The appearance of Iberians at their doorsteps brought them unwillingly or unwittingly into the first stages of a globalization that would, according to Gruzinski, eventually produce a decentered modernity catalyzed but not controlled by the efforts of Spanish and Portuguese sailors, soldiers, and merchants.

The unhappy outcome of Pires’s adventure in China is therefore not especially important for Gruzinski’s larger points. He shows quite successfully that despite the different outcomes of the Spanish and Portuguese expeditions, the adventurers from both kingdoms understood the challenges they faced in similar ways and used similar conceptual tools to overcome them. Both attempted to gather information from the natives in peripheral areas (coastal communities near present-day Veracruz and Chinese sailors in Malacca), both were motivated by a mix of greed and Catholic piety, and both dreamt of inspiring local rebellions that would allow their own kingdoms to conquer great swaths of territory cheaply and easily. More important, once the adventures had taken place the Iberians began creating economic and cultural links between their European domains and their overseas discoveries. In the case of China, these processes were much more gradual than they were in Mexico, but they occurred nonetheless.

With these claims, Gruzinski follows the basic arguments that have been laid out by Arturo Giráldez and Dennis O. Flynn, which put the birth of globalization in the sixteenth century, long before the usual nineteenth-century origin story often told by economic historians. Giráldez and Flynn have argued that a fixation on quantifiable economic trends in the pursuit of early globalization obscures the impact of noneconomic factors (biological and cultural transfers, for example), which they view as at least as important.[1] For Gruzinski’s narrative, the origins of globalization can be found even earlier in the realms of knowledge and dreams, and, as he subtly shows, the Portuguese conquest of China did not actually need to take place for China to become part of an imagined global space that eventually became linked to both Iberian empires by trade routes and a gradually intensifying series of cultural exchanges.

Besides making this contribution to the ongoing discussion on the history of globalization, The Eagle and the Dragon is potentially useful to its readers in two other ways that I can see. First, it provides accessible and fairly concise summaries of both the Pires and Cortés episodes for nonspecialist readers. A criticism could be made that Gruzinski does not refer to enough recent scholarship, especially in regard to Ming China, but for the purpose of providing general introductions from which to base his comparisons, this is not a serious shortcoming. Second, his book provides a very useful bibliography of European works about China and the Americas written in the late fifteenth and early sixteenth centuries, making it invaluable as a quick reference for researchers interested in these types of sources.

For those readers specifically seeking traditional military histories of the early Spanish and Portuguese overseas adventures, the book may not be especially satisfying because though Gruzinski summarizes the conquest of Mexico, he is far more concerned with the wars that never happened than those that did. But for those readers interested in how dreams of conquest may have spurred the world toward an accelerating process of globalization, this book is a must read. The Eagle and the Dragon is wittily written and packed full of enough interesting details to keep even the most casual reader engaged. It would be very difficult for a student or scholar at any level of specialization not to learn something from this book.

Citation: Ryan Holroyd. Review of Gruzinski, Serge, The Eagle and the Dragon: Globalization and European Dreams of Conquest in China and America in the Sixteenth Century. H-War, H-Net Reviews. June, 2015.
URL: http://www.h-net.org/reviews/showrev.php?id=43676