This book was reviewed by Alon Levkowitz for H-US-Japan in September 2009 and is reprinted here under Creative Commons license
January 1, 2009
Print

A Broad and Complex Perspective of the Asian Region

The architecture of the Asian region has gradually changed during the past three decades. From a region that was based on and influenced by bilateral alliances, it has become a multilateral region with an increasing number of institutions that play an important role in Asia. These institutions include Asia Pacific Economic Cooperation (APEC), Association of Southeast Asian Nations (ASEAN), Korean Energy Development Organization (KEDO), ASEAN Regional Forum (ARF), Shanghai Cooperation Organization (SCO), Six Party Talks, and others. The changing interactions in Asia raise important questions that this edited volume deals with: What is the vision of the changing face of Asia? What 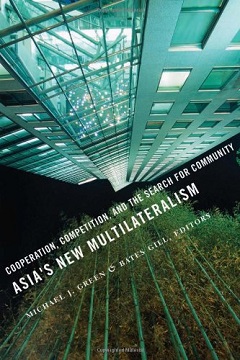 attitudes do the Asian nations have toward the new multilateral environment? How do they envision the role of the international organizations in the region, regionalism in Asia, and the Asian community, and what are their assumptions toward the U.S. role in Asia? These important questions influence foreign, security, economic, and even health policies of all the states in the region.

The first part of the book includes seven chapters that analyze the views, interests, goals, and attitudes of the United States, China, Korea, Japan, India, Australia, and the Southeast Asian nations. Each chapter gives a brief history of the state's attitude toward bilateralism versus multilateralism, the regional organizations, the Asian community, and the internal debates between the political and ministerial players within the state over these issues.

The second chapter discusses U.S. attitudes and policies toward Asia. The United States, the most influential player in the region, plays a vital role in foreign and security relations of most Asian nations. It has a bilateral security alliance with some, while with others, its presence and policies in the region influence domestic Asian security and foreign policies. Washington views its relations with Asia and the changes in the Asian region as influenced by three debates. First, the debate between the Asia-Pacific (or trans-Pacific) regionalism and Asian regionalism and how (or if) the two can coexist; second, the future role of Washington's traditional alliance-oriented strategy in Asia and how it coincides or conflicts with Asian multilateralism; and third, the debate between institutionalized versus ad hoc multilateralism (p. 33). These three debates interrelate and influence the discussions not only in Washington but in other regional capitals as well, which the other chapters discuss.

I would like to elaborate on the third debate. Washington prefers an ad hoc multilateral mechanism aimed at a specific task, such as the Six Party Talks, which was created to handle the North Korean nuclear crisis (p. 43). Ralph Cossa raises an important analytical point concerning this ad hoc mechanism (p. 45). In the long term, the Six Party Talks can become a more institutionalized Northeast Asia forum for discussion, cooperation, and even resolution to security issues in the region. One could say that institutionalization of the Six Party Talks will eventually create a mechanism that will prevent conflicts in the region by using, for example, the ARF preventive diplomacy and CBMs. President Barack Obama should consider if President George W. Bush's former policies toward Asia coincide with his new vision or should be changed. The economic crisis and the North Korean nuclear and missile threat do not allow President Obama the luxury of waiting until he evaluates his policy toward the region.

The third chapter analyzes China's regionalism and Asian community perspectives. China's post-Cold War policy toward institutions is more active than it was during the Cold War. China has begun playing a more dynamic role in the region and has been a member in regional institutions, such as APEC, ARF, ASEAN Plus Three, and the Six Party Talks. China is a key player in some of these institutions; for example, it plays a vital role in the Six Party Talks. China sees its role in the new Asian architecture as part of its policy to decrease fears of its potential threat that some Asian nations have. China is concurrently pursuing a policy that will increase its influence in Asia as a balance to the United States' power. In the future, Beijing's Asian regionalism policy will depend on the Asian nations' reaction to China's policy and Washington's response to the new changes in Asia.

The fifth chapter discusses the changes in Japan's attitude toward the region. Tokyo has changed its policy from a bilateral perspective in the Cold War to a more active role in Asian regionalism. At the end of the chapter, Akiko Fukushima states that: "for Japan, bilateralism, regionalism, and multilateralism are not choices from which it must select only one. Rather, it must use all three" (p. 122). I completely agree with this argument, which results from Japan's constitutional limitations and its unique role in Asia-Pacific. Japan's incremental changes of its security policy, due to the increased North Korean threat, might lead to changes in Tokyo's responsibility and tasks in the region's security architecture. The Six Party Talks and the ARF would serve as excellent institutional mechanisms for discussions on how the changes in its defense policies would reflect on the region.

The second part includes five chapters that analyze the functional challenges of the region, such as economy and security. Reality in the region is not static and as Michael O'Hanlon mentions in chapter 11, one of the security challenges is North Korea (p. 280). This issue is discussed in other chapters as well. Pyongyang has shown its ability to launch the Taepodong-2 missile and conduct a second nuclear test even when the Security Council (SC) threatened to increase sanctions. The North Korean challenge questions the ability of regional and global institutions to resolve this issue. U.S. President Obama decided to approach the North Korean problem with the assistance of China, Russia, Japan, and South Korea through the UNSC Resolution 1874. To date, the Six Party Talks mechanism has not been able to convince Pyongyang that it should resume negotiations. Does this mean that the North Korean crisis cannot be resolved via a multilateralism mechanism? Should it be resolved using the old bilateral mechanism between Pyongyang-Washington or the Pyongyang-Beijing axis? Or, should we combine multilateral and bilateral mechanisms to cope with this crisis? If the North Korean crisis escalates or if its regime collapses, the Asian nations will have to resolve this scenario via a multilateral mechanism, such as using the Six Party Talks as a mechanism to cope with the new environment.

In the twelfth chapter, Mely Caballero-Anthony deals with issues that have not been the focus of international relations literature during the past four decades, because they were not core security issues. During the past decade, the world has discovered that nontraditional security (NTS) issues are harmful, and that national boundaries are not safe enough against diseases that erupt in other states. The SARS epidemic changed the attitude of Asian states toward the need to cooperate to prevent SARS from spreading. Caballero-Anthony even mentions the H5N1 virus as a disease with pandemic scale potential (p. 310). Almost a year later, the H1N1 virus (Swine Flu) has become the new global NTS threat with the potential of causing damage to the region. More should be done with the assistance of the World Health Organization to help mainly the poor countries in the region to prepare themselves against the new NTS health threats. This chapter clarifies that diseases are not the only NTS threats. Natural disasters (such as tsunamis), international crime, terrorism, and poverty are additional NTS threats that the region and its institutions must deal with.

This edited volume is an excellent textbook for students and scholars in international relations, political science, and Asian studies, and even for diplomats and policy makers. It gives readers a broader perspective of the Asian region and a glimpse at the complexity of some of the issues that the states in the region face.