An Inhuman History with a Happy End?

In about three hundred pages, Barbara Freese takes us on a coal-fired journey from hundreds of millions of years ago to the Kyoto agreement. The book begins in Britain, the first nation to be thoroughly transformed by coal, then moves to the United States, where coal transformed a virtual wilderness into an industrial superpower with astonishing speed, and finally to China, where coal has played a surprising role in that nation's long and dramatic history.

The book is easy to read even for someone with only minimal background knowledge on coal. Despite this, Coal is valuable reading as well for those familiar with the subject. The author is, of course, only able to shallowly explain such a broad subject in such a limited amount of pages. The strength of the 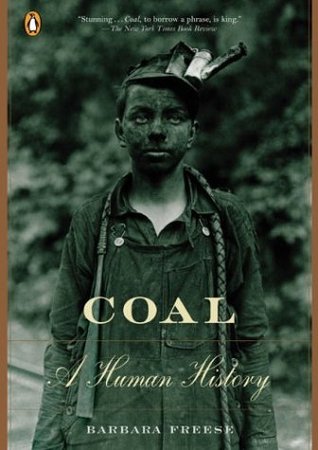 book is elsewhere. The strength of the book is how it binds separated historical events together with coal as a connector. We will, for example, learn how the fact that Catherine of Aragon's failure to produce a male heir to King Henry VIII changed the history of coal forever. Along the way, we learn about the coal ships importance for England's naval strength, and meet Friedrich Engels who supported his and his comrade's Marx's work with incomes earned at his father's cotton mill in Manchester.

The history of coal Freese displays for us is a most inhuman history. We learn how miners were threatened by all the classical elements--earth, air, fire, and water, and how the firemen did not put out fires but, just like in the novel by Ray Bradbury, start them. "One moralist of an earlier century concluded that the need to send people to work in such horrid places was itself evidence that God was punishing humanity for the original sin" (p. 47). The only thing that could be worse than being a coal miner in England was to be a coal miner in Scotland, or as we learn later in the book, perhaps a coal miner in China.

Conditions above the ground were not much better as the pace of daily work was set by the regular beat of the steam engine. Twilight no longer brought rest as coal-gas lights were keeping the factories so bright that observers cheerily compared them to palaces. "With coal power to substitute for adult muscle, and machinery to substitute for adult skill, factory owners found that children were not only adequate for many jobs, but cheaper and far easier to discipline" (p. 77). In fast growing cities, coal's pollution may have been killing the inhabitants slowly, but a lack of heat would have killed the quickly. As wood would have cost from two to five times as much, it was not an option. In 1956, after nearly seven hundred years of complaints about the coal smoke in London, Parliament finally banned the burning of soft coal in the central city. Four years previously, the historic "Black Fog" had killed 4,000 people.

The story of technical development as presented by Freese is a good example of the so called re-bound effect, although she does not mention it. The re-bound effect means that part of the energy saving produced by investments in efficiency is taken back by consumers in the form of higher consumption. According to the Khazzoom-Brookes postulate, increased energy efficiency at the microeconomic level, while leading to a reduction of energy use at this level, does not lead to a reduction, but rather to an increase in energy use at the national, or macroeconomic level. This technical development starts with Newcomens coal fired vacuum pump installed at a coal mine in 1712. By 1760 hundreds of these fuel gluttons were pumping water from coal mines all over England and Scotland. "In 1776, as the revolutionary events in the American colonies were unfolding, James Watt put his first two revolutionary engines to work..." (p. 64). As he was able to squeeze four times more motive force out of a lump of coal, he was able to free the steam engines from the mine mouth and at last find a welcome in the nation's factories. Watt and his companion Boulton marketed their product as an energy-efficiency device and took their royalties as a cut of the estimated coal savings, but on a national level, it led to an ever increasing use of coal.

As Freese moves from Britain to United States, the pace of events speeds up. In Britain, it had taken centuries for areas to develop from forested wilderness to industrial metropolis, in the States a few decades was enough time. "By the 1860s, Pittsburgh's smoke would impress even the London-born novelist and seasoned traveler, Anthony Trollope, who would call Pittsburgh the blackest place he had ever seen" (p. 126). The American Northeast's coal-fired economic surge deepened the political and economic divisions between the industrial North, dependent on coal-burning factories, and the agrarian South, dependent on slave-exploiting plantations. It also ensured that when the Civil War finally came, it would explode with an industrial intensity. A 38-to-1 advantage in coal ensured the victory for the North. After the Civil War, attention was devoted to extending the railroad to the Pacific. Coal-fired industrialization accelerated the taming of the wilderness and the defeat of its native inhabitants and challenged the nation's image as an egalitarian land of farmers. Before coal-driven World War I, Freese introduces the Molly Maguires and a women-led antipollution movement.

Freese moves towards the present with a tour to a single power plant which consumes 6.5 million tons of coal per year, about three-fourths of what the entire nation consumed in 1850. Even though visible air pollution has been greatly reduced, coal remains a major health threat, as emitted particulates may still kill nearly as many people as traffic accidents and many more than homicides or AIDS. For the byproduct sulphur dioxide, there is a nice history to be told as the cuts required in the governmental acid rain program have cost much less than anyone thought--about twenty times less than some early industry estimates, and even less than environmentalists had predicted. On the other hand, additional reductions of up to 80 percent beyond the 1990 requirements might be needed. Is there a lesson to learn for reductions in carbon dioxide emissions--perhaps these costs might also be much less than anticipated? On the other hand, the reductions proposed in the Kyoto Protocol are still far below the actual need for reductions.

About the history of coal in China--it would have been interesting to read much more. Unfortunately, Freese's history jumps with quantum leaps. In eleventh-century China, for example, iron works in one small region produced more pig iron than the amount produced in Great Britain in the early 1700s. In 1996, five million Chinese mined about the same amount of coal as 90,000 miners in the United States. This discrepancy is worthy of further discussion. As China continues to grow, its coal use and carbon dioxide emissions are expected to track upward. According to Freese, "it might still be possible for China to change course before it locks itself into decades more of increased coal use, persistent air-pollution, and rising greenhouse gases" (p. 231). In order to achieve this goal, the world should aggressively develop alternative energy technologies and use international financing structures. Besides saving hundred of thousands of human lives this could also have positive societal effects as "moving from the concentrated power of coal to the more widely dispersed power that nature provides on the surface could prompt a parallel dispersal of political and economic power" (p. 244).