Home / Reviews - China and the World

Frazier, The East is Black - Cold War China in the Black Radical Imagination, 2014

Robeson Taj Frazier's book was reviewed by Joseph Parrott for the History of African Americans discussion list in June 2017.

(Frazier spoke about some of this research in his talk at our Tinted Lenses conference.)

Since W. E. B. DuBois defined the global color line as "the relation of the darker to the lighter races of men in Asia and Africa, in America and the islands of the sea," scholars have posited various theories on the development of international solidarity.[1].

Pan-Africanism has long dominated the literature, but in recent years scholarship on the links between African and Asian diasporas has increased. Given differences in language, culture, and geography, activists developed diverse networks and  projects to achieve unity of purpose. In the mid-twentieth century, radical African American activists looked to China for support and inspiration to strengthen their struggles for equality during the Cold War. 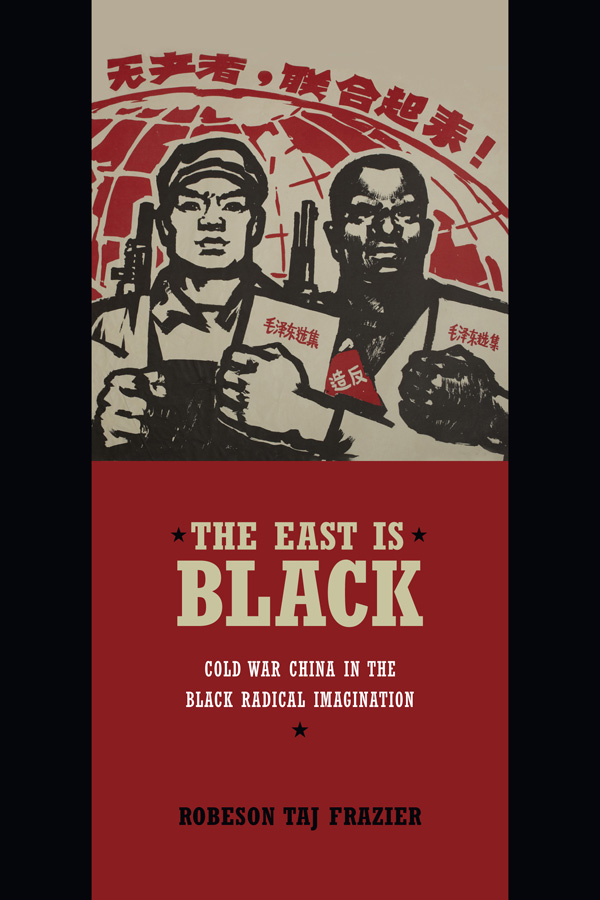 In The East is Black, Robeson Taj Frazier seeks to recover the evolution of Maoist China in the black radical imagination. He contends that African Americans used their experiences traveling in the anti-imperial nation to challenge the formulations of race and world affairs that motivated Cold War politics. At the heart of Frazier's study is the transnational exchange of ideas, goals, and peoples that brought black Americans into direct collaboration with China's government. Mao Zedong sought to legitimize his rule--domestically and internationally--by "constructing Chinese communism as global capitalism's antithesis" (p. 11). Given the close association of capitalism with American preponderance, a prominent element of this strategy included the exploitation and manipulation of the United States' deeply contested race politics and its popular conceptions of China. African American radicals who visited China as reporters, educators, and exiles became central actors in this project. They found in Mao's flexible anti-imperial reading of Marxism an attractive alternative to the United States' systemic economic and social inequalities. These globe-trotting foreigners adapted and disseminated Chinese communist ideals for international consumption, even as they witnessed some of the limitations of Mao's domestic revolution.

Frazier focuses on six individuals, providing a detailed textual analysis of their cultural production about China. During the 1950s, W. E. B. DuBois, Shirley Graham DuBois, and reporter William Worthy all toured the country, while Mabel Williams, Robert Williams, and educator Vicki Garvin lived for extended periods in China in the 1960s. Frazier contends that they came to understand the hardships faced by blacks in the United States as inextricably linked to those of China by their shared participation in a global "system of racial capitalism" based on white supremacy, unequal wealth accumulation, privatization, and male dominance (p. 6). Travel and travel narrative provided a conduit through which internationally minded radicals could trade, negotiate, and disseminate political ideas. The result was a direct challenge to the dominant Euro-American liberal order that had long constrained the freedoms of nonwhites and defined identity within strict national parameters. These new ways of viewing the world expanded the political consciousness and imagination of African Americans and, to a lesser extent, their East Asian hosts.

For Frazier's activists, China became a template that offered "instructive principles and praxis for making a U.S. revolutionary movement" (p. 34).

Frazier uses DuBois's concept of "unity and variety" to explain this radical transnationalism, which forms its identity less around sameness than a pluralistic resistance to racial capitalism undertaken by the long-marginalized colored peoples (p. 69). In particular, Dubois and the Williamses articulated a decentralized solidarity based on literary and aesthetic presentations of "a shared history of epistemic, ontological, and bodily violence" and the common struggle against these trends (p. 150). Frazier's thoughtful formulation provides an important addition to recent scholarly discussions of what might be termed the Third World Project, or Tricontinentalism. Yet in contrast to more sweeping studies such as Vijay Prashad's _The Darker Nations_ (2008), Frazier's close textual analysis and archival research provide an opportunity to unpack the contested politics of representation and simplification that occur as part of these transnational exchanges. In addition to China's nativist traditions, The East is Black reveals among other examples that the radical transnational challenge to racial capitalism did not necessarily erase masculine privilege, leading to different readings of Chinese politics by male and female authors.

Unfortunately, Frazier limits himself by too narrowly concentrating on travel literature. Deft analysis of written material far outweighs attention to the reception of these texts in the United States or elsewhere. Though the author certainly recognizes the need for such impact assessment, his attention to the matter is often cursory. As a result, The East is Black does not seriously explore Maoist China's connections to broader African American movements, despite Frazier's previous engagement with this topic.[2] Prominent organizations sympathetic to Maoism such as the Black Panthers and the Marxist wing of the African Liberation Support Committee make brief cameos, primarily in a "coda" devoted heavily to Nixon's rapprochement with China. This omission seems like a missed opportunity not only because individuals such as Huey Newton visited China, but because accessible publications such as _The Black Panther_ and _African World_ discussed China and were influential in shaping African American internationalist thought. Since Marxism--partially inspired by China--both fueled and divided black activism from the late 1960s onward, greater attention to African American responses to Eastern racial and ideological formulations would have provided an important addition to the internationalist historiography of the late civil rights and Black Power eras.

Frazier's emphasis may not be on the domestic contexts of either country, but he does do an able job of capturing Chinese views of the global color line, making his transnational history worthy of attention from scholars outside African American studies. Too often in monographs on black or ethnic internationalism, foreign actors appear as two-dimensional: exotic tropes that American actors react to and against. Frazier's linguistic abilities and cultural sensitivities deliver a nuanced image of Mao's communist state that captures its ideals and contradictions as it pivoted to claim leadership of the nonwhite world. Admittedly, Frazier utilizes relatively few Chinese-language sources, but he marshals evidence from expert monographs, translations, and both American and Chinese archives. In so doing, he highlights the role of states in forging a radical Third World solidarity, linking activist histories such as Judy Tzu-Chun Wu's _Radicals on the Road_ (2013) and Laura Pulido's _Black, Brown, Yellow, and Left_ (2005) with an expanding scholarship on global South diplomacy. The result is an important study that sheds new light on how radical states worked with transnational actors to challenge the Cold War, empire, and racial inequality.

The East is Black helps expand the geographic and cultural boundaries of scholarly understandings of the black radical imagination. Frazier's detailed analysis of the dynamic terrain of Third Worldism, anti-imperialism, and black radicalism insightfully illustrates how African Americans engaged with a fluid global color line in pursuit of a transnational solidarity against white racial capitalism. The study is well worth reading for scholars of African American politics and intellectual thought, but should be equally rewarding for students of modern global history and the Cold War.