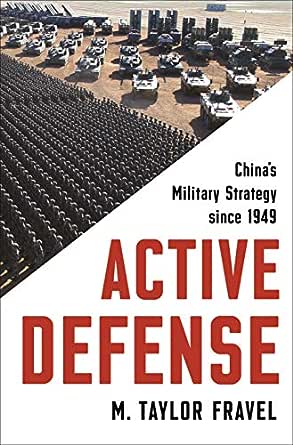 The requirement to understand how China arrived at its current strategy makes this work particularly relevant at this point in time, given that China has proven itself to be in great power competition with the United States. Since 1949, China has adopted nine national military strategies, also known as "strategic guidelines," and of those nine, three resulted in a major transformation in the way that the People's Liberation Army (PLA) wages war. In his book, "Active Defense: China's Military Strategy since 1949," M. Taylor Fravel examines each of the nine strategic guidelines and, of those, three in particular that resulted in major strategic change, in an attempt to explain why a change in the PLA occurs. What set these three guidelines apart from the other six? The author argues that these three major shifts occurred because of the change in external factors, incentives, and scope and due to internal politics, specifically unity of vision within the Chinese Communist Party (CCP). Not only is a strong external incentive for change necessary, but party unity is also requisite to enable senior military officers to respond to these changes by formulating a new strategy if necessary.

In his book, the author methodically examines "when, how, and why" China has pursued major changes in military strategy since 1949. He argues that there are three fundamental concepts derived from the Chinese civil war that frame how China conceives military strategy today: strategic guidelines, active defense, and the people's war. As defined by the author, strategic "change" is not simply the proclamation of new ideas by party leadership, unless those new ideas are acted upon by the PLA and subsequently result in significant organizational change or reform.

Using newly available Chinese-language sources as well as memoirs of prominent Chinese military officials, Fravel analyzes motivations for change, incentives, and scope, when the change occurred in peacetime, specifically focusing on major changes that occurred in 1953, 1980, and 1993. It is insufficient to say that China, as a relatively late "modernizer," has simply been playing a game of "catch up" with more advanced military powers. Instead of attempting to explain the strategic change in relation to the two traditional markers in history, the "interwar" period of the twenties and thirties and the post-Cold War era, the author analyzes the distinct changes in PLA strategy, particularly in relation to the issuance of strategic guidelines by the CCP. Fravel argues that China's initial changes in military strategy centered on threats presented by the Soviet Union and the potential for conflict over Taiwan, not necessarily by the United States itself or bipolarity associated with the Cold War. In fact, in the period following the collapse of the Soviet Union, China assessed that the world was moving toward multipolarity, thus necessitating a change in strategy to meet anticipated opportunities rather than to mitigate threats posed by the hegemony of the United States. Fravel argues that a key component necessary for change is not only the ideas outlined in the strategic guidelines but also political unity within the CCP, which drives the change by enabling top military leaders to make adjustments. As is the case in other socialist states, the military serves the party and not the state per se and thus the party reserves the right to initiate change, rather than top military officials.

Over the course of seven chapters, the author examines PLA strategy over its entire existence--from pre-establishment of the PLA during the civil war, through the Korean War, and into the Cold War era--China's admission into the nuclear club in 1964, and finally its adaptations for the modern era of cross-domain operations. Beginning with the establishment of the PLA in 1949, the author attempts to correlate significant changes in military strategy with the dissemination of the strategic guidelines. Previous studies of Chinese military strategy relied on observables (training, doctrine, operations, etc.) rather than analysis of the strategic guidelines.

Through his analysis, the author identifies periods when disunity within the CCP has prevented strategic change despite the presence of otherwise compelling external stimuli. Fravel is careful to point out that this book does not cover strategy associated with any particular service or singular domain but instead addresses China's military strategy as a whole. However, it mentions that CCP's leadership views "informatization," or technology that enables military operations, as being of primary importance to enable future military transformation and will likely lead to a "profound military revolution" (p. 224). The facet of China's military strategy that has remained unchanged is China's "second strike" capacity as a nuclear deterrent (p. 238). The author argues that the reason China's nuclear strategy has not changed since 1964 is due to the fact that the CCP fully appreciates the gravity of nuclear weaponry and has not relinquished control of its nuclear arsenal to top military commanders.

Thankfully, the author avoids relying on unnecessary jargon most often employed to impress peers in academia and caters to a wide audience in a clear and concise manner, thus proving to be easily digestible for those who may not be familiar with Chinese military strategy. It is in this way that Fravel effectively argues his case that while external factors influence strategic guidelines, the catalyst that drives major change is party unity. This easily digestible book should appeal to those interested in military strategy, international relations, international security, military doctrine, and China.