Time to Bury the Q-Word?

In July 2007, activists held a mock funeral in Detroit for the "N-Word," one of the most denigrating and racist epithets for black people, reminding us of the long and painful history of struggle against racial discrimination in the United States. It was a symbolic burial of a chapter 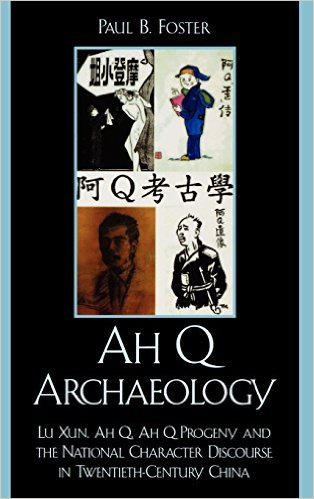 of history in which the voices of African Americans were silenced, their civil rights violated, and their identity as members of the American nation denied. The lesson was clear: objective and just history writing requires narration and interpretation that is mindful of just how biased, misrepresentative, and historically-loaded words such as the "N-Word" are. As a Chinese Canadian, I am well aware of those similarly degrading terms used by some racists in the West to create stereotypical images of ethnic Chinese; many words acquire racial connotations over time, the term "Ah Q," for example. Should these words also receive mock funerals? Should we bury this Q-word because it can have racist connotations?

To be fair, the term Ah Q, the name of a fictional character created by Lu Xun in 1921 to represent the negative Chinese national character (guomin xing), was not commonly used in a racist context. For decades after its first appearance, the Chinese themselves used the term to label those who are complacently ignorant, indolent, unhygienic, backward, slavish, and parochial. As a negative example, it served as a warning to urge Chinese to change for the "better." However, since people using this term implicitly identify certain negative human characteristics as "natural" components of the Chinese national character, they are ironically accepting and reinforcing certain stereotypical images of the Chinese. Some scholars might associate such usage with self-Orientalism or -Occidentalism. Foster mentions both of these possibilities. He also quotes from Xiaomei Chen's book Occidentalism: A Theory of Counter-Discourse in Post-Mao China (1995) to give us a definition of the term: "Occidentalism refers to 'a discursive practice that, by constructing its Western Other, has allowed the Orient to participate actively and with indigenous creativity in the process of self-appropriation, even after being appropriated and constructed by Western Others' " (quoted, p. 13). Over the years, there have been ongoing discussions about whether Ah Q was really "dead," even after Lu Xun had him executed in the final episode of the "True Story of Ah Q (Feb. 12, 1922)." Paul B. Foster's immensely rich and complex book traces the rise and development of this ironically constructed Ah Q discourse and explores how it has played a significant role in shaping Chinese nationalism since the early twentieth century.

Ah Q Archaeology is an ambitious attempt to weld literary study and historical analysis in exploring the rise of Chinese nationalism. Foster sees a parallel development between literary production and the rise of national consciousness in early twentieth-century China: "Literature is the key to not only the construction of national identity, but also to the destructive critique of national character in early twentieth-century China and therein lies a basic paradox of nationalism in China--'ironic nationalism.' Ironic nationalism is the idea that Chinese thinkers like Lu Xun and Liang Qichao participated in the nation building effort during the late Qing and early Republican era by way of their negative critiques of Chinese national character" (p. 19). During the May Fourth New Culture Movement (roughly 1915-1925), Lu Xun and other iconoclastic intellectuals questioned the validity of holding on to traditional Chinese values, especially Confucian ones, for reforming a China that was subjected to both Western imperialistic aggression and domestic political fragmentation.[1] Through their essays and fictional writings, these intellectuals encouraged their fellow Chinese to envisage a new, enlightened, and civilized national character by questioning and abandoning the old and decaying one, as represented by Ah Q. Lu Xun thus contributed to the creation of a new national consciousness. But Foster warns us not to give too much agency to both Lu Xun and Ah Q: "Situated at the crossroads of the discourse of modernity and tradition, and of nationalism and culturalism, Lu Xun was both an agent shaping the modern national consciousness and a product of it. His most famous character, Ah Q, is also such an agent-product" (p. 7). The central argument of the book is that the "True Story of Ah Q," when being read, discussed, critiqued and debated in the public sphere, "functions in the 'imagining' of the national character." This process, as described by Foster, continues "until gradually an imagined national character is constructed, deconstructed and reconstructed, individual by individual, traversing the collective readership over a long period of time" (p. 14).

Chapter 1 of the book gives readers an "overview of the Ah Q discourse" (p. 5), essentially tracing how Ah Q, as a symbol of negative Chinese national character, was interpreted and reinterpreted over the years. It ends with a brief discussion of methodology and introduces the term genealogy, which Foster defines as the history of discourse (p. 10). By studying the history of Ah Q discourse, Foster attempts to reveal the dual role of Ah Q as both agent and product of Chinese nationalism. Chapter 2 provides the historical context of his analysis of Ah Q discourse and a brief introduction of some theoretical works on nationalism (mainly by Anthony D. Smith, Benedict Anderson, and Ernest Renan) and other important studies on Chinese nationalism and Lu Xun (by Lydia H. Liu and Prasenjit Duara).[2] Chapters 3 and 4 deal with Lu Xun's early essays (before 1911) and later writings (1918-1936). Chapters 5 and 6 are thematic studies of Lu Xun's contributions to the Ah Q discourse. They are entitled "Lu Xun's Attack on National Essence and Chinese Spiritual Culture" and "Construction of the Ah Q Discourse (1922-1949)" respectively. Chapter 7 includes a discussion of Lu Xun's reputation in the West, especially how his work was read and praised by Romain Rolland. Chapter 8 discusses how the Ah Q discourse continued to thrive after the founding of the People's Republic of China in 1949: Lu Xun was canonized by Chairman Mao, and the Ah Q character was interpreted as a Chinese peasant whose negative behavior reflected the mentality of the landowners who repressed him. Ah Q did not represent national character but class nature. Ironically, some critics of the Chinese Communist Party were able to use the Ah Q discourse to critique Chairman Mao. The conclusion, chapter 9, restates some of Foster's earlier points.

Some of the unnecessary repetitions might be partly due to the fact that chapters 1, 7, and 8 were derived from self-sustaining journal articles. This problem might have been reduced by the re-organization of certain paragraphs. For example, chapter 2 is a very illuminating chapter that demonstrates the historical conditions that gave rise to a form of ironic nationalism in China. It provides a good discussion of the literature on the origins of nationalism and other relevant issues, such as its relationships with tradition, imperialism, print capitalism, and modernization. However, such essential information might be more appropriately placed in chapter 1 so that readers would have a better grasp of the true relevance and contribution of later chapters to certain scholarly debates about nationalism. For example, Foster's point that the concept of ironic nationalism might challenge the necessary connection between nationalism and invented tradition should have been raised in the introduction of the book.[3]

Likewise, chapter 1 should have included a short biography of Lu Xun and a short synopsis of the "True Story of Ah Q"; as it is, readers must wait until page 140 to find such a synopsis. Although the expressed purpose of the book is to caution against giving too much agency to Lu Xun and the concept of Ah Q spirit, the desired synopses could be of immense help to those of us who are not Lu Xun specialists. The first section of chapter 1 only tells us that Ah Q is "a prominent symbol of the Chinese national character in the modern Chinese intellectual consciousness" and that it is perceived as a "negative symbol" (p. 1). The author does not elaborate on why the symbol is negative. Moreover, since this book deals with the concept of discourse and the method of archaeology, I am surprised to see the omission of works by Michel Foucault and other postmodern theorists in the bibliography. At the very least, for the book to be more useful to non-China specialists, the first chapter should provide more background information on modern Chinese literature and history, and situate itself more explicitly within the scholarly literature on nationalism. For a book with 401 pages, an introductory chapter with only eighteen pages is too short to be effective.

Finally, I am very impressed by the accuracy of the Chinese characters found in the glossary and bibliography. Occasionally, there are a few wrong or missing Chinese characters; for example, "Bo" in the name of the writer Bo Yang should be a different character (p. 356), "Shi" of Hu Shi is printed in the simplified form (p. 362), the "gong" character is missing in the name Tao Lugong (p. 384). Yet overall these sections reflect the painstaking efforts of the author and the editors to minimize errors.

In conclusion, Ah Q Archaeology is an admirable attempt to weave together at least three strands of scholarship: nationalism, modern Chinese literature, and modern Chinese history. The result is exceedingly rich, but readers might be overwhelmed by how some of the arguments diverge in different directions within a chapter. The book eventually focuses more on literary analysis and issues of audience reception. For readers wanting to learn more about Chinese nationalism and modernity, relevant insights and implications are often found in scattered places throughout the book. I hope that a revised version of this book, with a more fully developed introduction, will be made available in the near future. Even with these shortcomings, the book makes a salient point about the Ah Q discourse, that is, its vitality over the years. Ah Q as a reified and stereotypical image of the "uncivilized" Chinese has been a "text" read, re-read, and misread in a process that has given Chinese people opportunities to reflect on their weaknesses. In a sense, saying the Q-Word is a self-imposed critical strategy for Chinese people to search for their own visions of civilization, modernity, and the nation. Ironically, as long as the goal of being "completely" modern and civilized is still considered unattained by intellectuals in China, there does not seem to be a day when burying the Q-Word will become a reality.

[1]. The May Fourth Movement as a political demonstration against imperialism and warlordism officially took place on May 4th, 1919, but some scholars see the decade from 1915 to 1925 as an era of New Culture Movement.

[3]. Foster writes in the conclusion of the book: "Lu Xun's negatively conceived national character critique thus breaks with the general theory of imagining the nation because it blocks out reference to the past." (p. 344) For some reason, Eric Hobsbawm's edited book, The Invention of Tradition (Cambridge: Cambridge University Press, 1983) and his other works do not appear in the bibliography.