Ford, China Looks at the West: Identity, Global Ambitions, and the Future of Sino-American Relations, 2015

Christopher A. Ford's China Looks at the West is an important study establishing a foundation for understanding China's approach to the United States, which is the most important international relationship early in the twenty-first century. The exercise is large and the book is long, over six hundred pages. The focus or purpose of the study as stated on the first page is assessing China's narrative of America and the narrative's relationship with People's Republic of China (PRC) politics and policies. To do this and to cover the related topics of China's identity and global goals highlighted in the book's title involves a very broad scope for one volume. 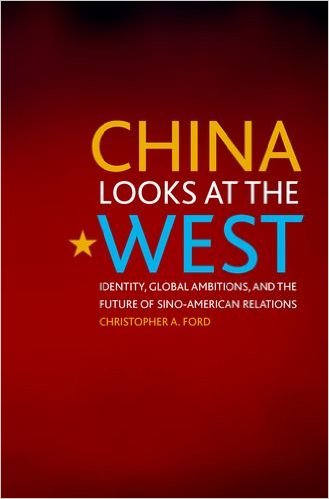 The book's wide-ranging chapters examine in considerable depth a variety of topics of importance to anyone seeking to understand the contemporary thinking of Chinese leaders dealing with the United States. Thus, three chapters at the outset provide an in-depth assessment of the elaborate information management systems of the government of the PRC. Those chapters explain how the Chinese government has created and manipulated China's evolving narrative of America and they explain how the author discerns from the evolving narrative judgments about the Chinese government leaders' actual thinking about the United States.

There follows ample coverage of China's turbulent history from high points of power and influence of imperial China to state collapse in the face of domestic decline and foreign aggression in the nineteen and twentieth centuries. The examination is used to support a key judgment in the book of the importance for Chinese leaders then and now to achieve a Chinese return to greatness, defined in the volume as reaching high levels of national power to a position where China is unchallenged in Asia and widely recognized internationally as a great power.

The book's focus on China's narrative of America tracks through the twists and turns of the domestic and foreign policy of the PRC since its founding. In the process, it delves more deeply into developments in the past two decades. It notably devotes three chapters (11-13) to explaining the author's argument that Chinese discourse on and policy toward America have been heavily influenced by the government's creation of more "Sinicized" and "Confucianized" (p. 6) narratives that emphasize opposition to the United States going back to the leading revolutionary thinkers of China in the early twentieth century. In the latter regard, the author sees the Chinese narrative of today recalling themes of determination to resist American ambition and values seen in what is called the "Confucio-Leninist thinking" (p. 6) of Liang Qichao a hundred years ago.

Against the background of such negative recent trends emphasizing Chinese opposition to America comes the author's major finding that China's more than century-long drive to learn from America in its quest to return to great power influence was undermined and destroyed in the minds of some Chinese observers as a result of the international economic crisis beginning in 2008 and perceived American weakness since. Thus, the author warns American policymakers that Chinese leaders will be prone to negative and conspiratorial views of American intentions, and US efforts to reassure China are likely to fail and be interpreted in counterproductive ways as signs of American weakness. In his view, the main tool America has to move China to avoid confrontation and seek cooperative engagement is its ability to impose costs on important Chinese interests in the event of serious Chinese differences with America.

To effectively explain and support the above major findings involving sensitive issues of Chinese history, domestic politics, and foreign affairs requires mustering persuasive evidence and effective writing. The author does a generally good job in both areas. The sourcing throughout the study does not break new ground and probably will be familiar to specialist readers. It involves sometimes extensive use of existing studies by specialists in the United States and China on the one hand, and the use of the commentary of Chinese official outlets and various Chinese specialists and pundits on the other.[1] The writing is often eloquent and engaging. As a result, when the author seems to veer away from the immediate focus in order to describe at length China's propaganda systems in chapters 1-3 and to lay out an argument for the origins and evolution of China's opposition to American interests over the past century in chapters 11-13, the exploration down these avenues is engaging and seems worthwhile.

Of course, the sweeping and arguably bold judgments based on the author's assessment of developments of modern Chinese history and contemporary domestic and foreign policies probably will meet with criticism of perceived shortcomings from some if not many of hundreds of specialists who have devoted more in-depth attention to the various sensitive issues discussed by the author. Specialist assessments of various aspects of contemporary China have been especially contentious, with little agreement on such basic issues as the overall stability of the PRC regime. And the debate on whether and how the United States should deal with rising China continues to rage, with advocates of reassurance and positive engagement on one side contending with those like Ford who stress the need for American firmness and resolve.[2]

Against that background, this veteran specialist of US-China relations and Chinese foreign relations found a number of gaps and areas needing improvement. Heading the list was a weakness in the evidence used to support the policy recommendations. The study's foundation for understanding the Chinese approach to the United States provides an array of generally circumstantial evidence on what Chinese leaders think about America. However, the study provides little concrete evidence of what these leaders actually think of America; instead Ford focuses on China's propaganda system, which fosters negative views of America. These negative views might not reflect what these Chinese leaders truly think. The author raises this problem and says that an answer lies in what is called "decoding the discourse" (p. 72). This involves a careful reading of trends in the regime-created narrative to discern actual Chinese leaders' calculations and intentions. As a practitioner of this kind of analysis for years in US government service, I have found that this approach leads to interesting findings of importance but generally not of sufficient weight to justify taking a strong position on contentious issues in US policy.

The book's analysis also depicts enduring, mainly domestic Chinese narratives, developed over a hundred years, about China's search for great power and the evolution of Chinese opposition to the United States. Ford judges that such features will determine Chinese policy toward the United States into the future. To this analyst, such an approach is too definitive given the tortuous path China has taken in the modern world. Thus, the stability of China's regime and of its approach to America today could be subject to significant change. American policy needs to be judicious and prudent in taking the possibility for such change fully into account before pursuing the resolute cost-imposition approach recommended in this book.

Outside pressures coming from a determined United States in the incoming George W. Bush administration also need more consideration at the start of the twenty-first century. The book jumps over this period, instead discussing the turning point of 2008-09 when China started evincing a harder and less deferential approach to the United States. And its concurrent assessment of an ever harsher view of American hegemonism seems belied by Chinese practice in this period. It is only seventy pages later, in discussing future developments, that the importance of China's "peaceful rise" emphasis in the first decade of the twenty-first century is briefly addressed. This approach was designed explicitly to reassure America and was at odds with the anti-hegemony discourse stressed by Ford. Opposition to hegemony for the previous two decades had been depicted in major Chinese foreign policy statements as one of the two main goals of Chinese foreign relations, but coincident with the peaceful rise emphasis it was dropped and only peaceful development was said to be the main goal of Chinese foreign relations. Why did this happen? Chinese officials made clear to visiting specialists at this time that the reason had to do with the power of the United States, which Beijing feared would be used against rising China. Against this background, the PRC adopted a restrained posture toward the new Bush administration, even as it undertook egregious actions that China would in the recent past have stridently condemned as hegemonism, notably the US president's pledge to do whatever it takes to defend Taiwan.[3]

The book's somewhat muddled treatment of peaceful rise and hegemonism in the early Bush administration seems duplicated when, after long treatment of US decline and Chinese resolve following the turning point of 2008-09, the book says that Chinese specialists really did n0t see too much change; they continue to debate when multipolarity will occur and when is an appropriate time to put aside Chinese leader Deng Xiaoping's low-profile foreign policy. The treatment of Japan in chapter 10 also plays down the highs and lows in relations that do not fit the assessment of the chapter. The major development of Chinese accommodation of and catering to Japan in the early 1990s receives short shrift in a paragraph at the bottom of page 228. It notably involved a smoothly run visit with positive atmospherics of the Japanese emperor to Shanghai--the site of the major battle of the Sino-Japanese War in 1937--and other Chinese cities in October 1992.
And the emphasis on Confucian harmony in Chinese foreign relations stressed in the volume now seems dated as a feature of President Hu Jintao's foreign policy which has been played down by President Xi Jinping and his assertive infringement of neighbors' interests in pursuit of Chinese territorial and other interests.

In sum, the book provides a well-written discussion of several important arguments involving China's approach to the United States that will be of interest to general readers and specialists. It provides a great amount of food for thought along with well-argued assessments that nonetheless do not provide a final word on the sensitive and long-standing contentious issues discussed.