A few problems, but that’s to be expected 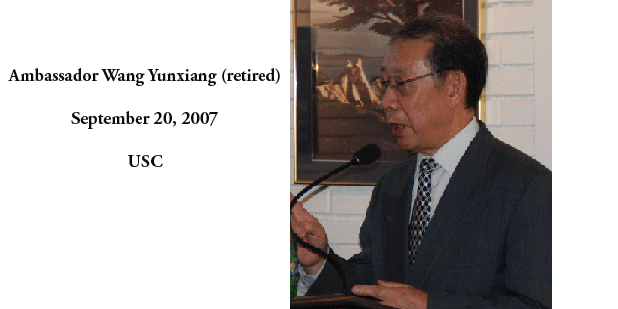 Speaking at USC on September 10, Wang Yunxiang 王雲翔, vice-president of the Chinese People’s Institute for Foreign Affairs (中国人民外交学会), concluded “I believe that [the U.S.-China relationship] is the most important bilateral relationship in the world, not one of the most, but the most.” He went on to explain that the relationship is guided by common interests; trade and economic cooperation, and maintaining international stability. Regarding tensions over Taiwan, China’s undervalued currency, and the US-China trade imbalance, Ambassador Wang explained that frictions between two countries of this size, holding these kinds of positions in the international community, were to be expected. “China and the US are two very big nations, frictions are normal, no difficulties would be abnormal. All of these problems can be overcome.”

Wang Yunxiang served in the Chinese Ministry of Foreign Affairs for over thirty years. He held top appointments in the the Information Department and the European Affairs Department as well as serving in several African posts, in Norway, and in San Francisco (as consul general in the early 2000s). Wang was China’s ambassador to Zambia (1996-99). The Chinese People’s Institute for Foreign Affairs is a research and advisory organization. Wang led a delegation that included specialists on North America and the World Trade Organization. They are meeting with current and former U.S. State Department officials such as former Secretary of State Warren Christopher.

During his wide-ranging one-and-a-half hour lecture at the USC U.S.-China Institute, Ambassador Wang covered several issues as broad as China’s economic rise, trade growth, foreign policy, environmental issues, and even gave a lesson in geopolitics. In his talk and in response to questions from the audience, he examined tensions in U.S.-Sino relations, including economic questions (the Yuan-Dollar exchange rate, the expanding trade imbalance, and dangerous exports), and relations with Taiwan.Domestic Growth: Costs and Benefits

Ambassador Wang began with an overview of China’s current domestic situation, citing an increase of six to seven times in the average household income within the past two decades, a maturing social security system, and a large boost in higher education enrollments while also improving primary school enrollments to 95% of those eligible. The soaring economy and rapid increase in living standards, however, did not come without costs. Ambassador Wang noted a vast and growing income gap between rural and urban residents and much faster progress along China’s coast than in its interior. These gaps have inspired a massive migration of rural Chinese to the mostly eastern-based urban centers, yielding inexpensive construction and service industry labor, but posing additional problems.

In addition to uneven domestic growth and development, the ambassador mentioned, China is also facing formidable environmental challenges. This year China overtook the U.S. as the world’s largest emitter of greenhouse gasses. (According to a study done by the Netherlands Environmental Assessment Agency, China’s CO2 emissions are now 8% greater than that of the United States). And according to the World Bank’s estimates, 16 of the world’s 20 most polluted cities are in China. Furthermore, Wang noted, toxic waste has is contaminating many rivers, lakes, and water reservoirs, making clean drinking water scarce.

In spite of the serious challenges facing China, Amb. Wang is confident about the future. According to the ambassador, the country’s devised a “sustainable growth program” designed to stimulate growth in China’s poorer central and western regions while also emphasizing environmental protection. The plan calls for an investment of 300 billion yuan (US$38 billion) in developing infrastructure in China’s less developed regions, building roads, irrigation systems, and providing electricity. Tax benefits and subsidies are now also being provided for rural farmers in an effort to ease their burdens and foster growth in agriculture.  These projects are being executed in conjunction with environmental measures aimed at reducing greenhouse gas emissions, making clean drinking water more available, and improving air quality. Amb. Wang pointed to tangible achievements already gained in these areas, noting that the more-centrally located provinces of Hubei, Henan, and Sichuan were now growing faster than the eastern coastal provinces. Environmental gains like the reduction of carbon dioxide emissions, particularly in Beijing, were also visible, said the ambassador, explaining that pre-Olympics efforts showed improvement was possible.

Though China’s economic achievements are many, Amb. Wang argued that they were too narrow. China, Amb. Wang said, is known as “the world’s factory.” China relies, he argued, too heavily on the manufacture of cheap goods. The ambassador said that  only 30-35% of the profit on any given product line generally winds up in the hands of the producers, while the majority of the profit goes to the product’s designers and distributors, in most cases,  foreign companies. Amb. Wang explained that the government now wants companies to to invest more into product design and marketing, and to reduce its dependence on production. Key to this is encouraging education in fields like engineering and computer science. “Every country should do its own research. China should encourage innovation and build more famous products in the world.”

Leaving China’s domestic affairs, Amb. Wang described Chinese foreign policy as generous and successful. China, according to the ambassador, has set out on diplomatic “friend-building” missions, with countries in every region. Though labeled as “problem states” by the U.S., the PRC has nonetheless engaged in productive diplomatic missions to many troubled African, Middle Eastern, South American, and Asian nations. Amb. Wang argued that “making friends” this way helps, “Without China’s good relations with North Korea, [the international community] would not have had this good result with the North Korean nuclear weapons crisis.” Turning to Africa, the ambassador suggested that the “Western” approach of dispatching peace-keeping forces to Sudan would not solve the country’s internal crises. Instead, according to Amb. Wang, a diplomatic approach based on dialogue and compromise is more likely to resolve the conflict.  Pointing to America’s war in Iraq, Amb. Wang forcefully argued that while military action can sometimes achieve quick results, the results are often not sustainable. He then suggested Chinese diplomacy had yielded results, pointing to the country’s success in settling nearly all its border disputes, despite sharing boundaries with fourteen nations.

Many questions, too little time

The audience of roughly fifty students, faculty, and community members had more questions than could be accommodated during the visit. Amb. Wang scarcely mentioned Taiwan during his talk, but made up for that when the first question asked about it. Complaining about U.S. pronouncements and policies on Taiwan, Amb. Wang said, “I should say honestly, Taiwan should not be allowed to separate away, because Taiwan is a part of China. Americans send wrong signals to Taiwan; the U.S. treats Taiwan as its ally, it sells Taiwan sophisticated weapons.” Taiwan, the ambassador said, is the single most sensitive issue in US-China relations, and the most important move now is to reach a “consensus” in the matter.

And the issue is serious. Many remember how China’s government sought to cow the Taiwanese electorate in 1996 with missile tests in the waters near the island and how then President Bill Clinton moved American naval vessels into the area. In 2008, voters in Taiwan are again going to the polls, this time to select both legislators and a president, and perhaps to also vote on if their government should pursue membership in the United Nations. It may be that the ambassador was reluctant to raise the issue himself, in anticipation of a major Taiwan policy address the next day by Thomas Christensen, Deputy Assistant Secretary of State for East Asian and Pacific Affairs. In that address, Dr. Christensen argued that the U.S. is vitally concerned with Taiwan’s security for strategic, moral, and legal reasons, that the U.S. government supported Taiwan’s democracy, but that it was opposed to Taiwan’s pursuit of membership in international organizations where statehood was a requirement.

The ambassador’s response to other questions also left many in the audience unsatisfied. He argued, for example, that fewer than 1% of Chinese goods exported to the U.S. suffered from defects and that problems were the result of design flaws or companies forced to used the cheapest possible sub-contractors. The scope of the problem is clearly larger than Amb. Wang concedes, with the Chinese government now scrambling to tighten licensing for exporters and to increase inspections. Reports in American newspapers have also noted that many American importers have not been sufficiently diligent in monitoring producers and that U.S. government oversight agencies are too understaffed to carry out needed inspections and reviews.

In discussing China’s Africa agenda, Amb. Wang drew upon his first hand experience in the region, beginning with service as China built Tanzania’s railway link to Zambia, through the aftermath of the Idi Amin years in Uganda, and finally with his service as ambassador to Zambia. The ambassador noted that in the 1960s and 1970s, China was eager for geopolitical reasons to forge links with newly independent African nations. Now that China is focused primarily on economic development and needs resources, however, Amb. Wang argued it’s natural that its ties with Africa be primarily economic ones. In discussing his time as ambassador to Zambia, for example, Wang Yunxiang only noted that he helped a Chinese firm acquire a copper mine. Amb. Wang did not discuss how China has recently increased pressure on Sudan to discuss accepting foreign peacekeeping troops in Darfur or whether or not China is now reducing aid to Zimbawe due to frustrations with the Mugabe regime.

USC student Damon Ferrara is majoring in international relations and East Asian languages and cultures. He has studied in Nanjing and Taipei and is a staff writer for USCI's US-China Today.