Eber, Wartime Shanghai and the Jewish Refugees from Central Europe: Survival, Co-existence, and Identity in a Multiethnic City, 2012

Irene Eber, the Louis Frieberg Professor Emerita of East Asian Studies at the Hebrew University in Jerusalem, has written widely about the 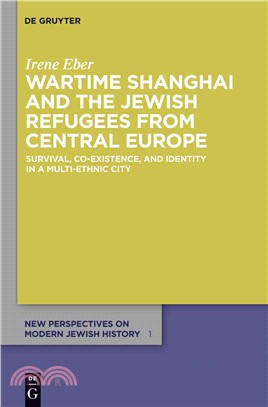 Jewish communities in China. Her most recent book, reviewed here, is a multi-archival and multilingual study of the German, Austrian, and Polish Jewish refugees in Shanghai during World War Two.

Shanghai, China's cultural, financial, and commercial center throughout its modern history, and according to historian Joshua A. Fogel, arguably the most Western of all Chinese cities before the Communist victory in 1949, attracted a surge of scholarly interest in the early 1990s.[1] Led by the late Frederic Wakeman Jr., historians at the University of California Berkeley and Cornell University, among other institutions, generously funded by the Henry Luce Foundation, have produced a number of important studies of Shanghai and contributed to the emergence of a distinct field of Shanghai studies.[2]

Research into the multiple geographic ramifications of the Holocaust has also promoted these studies. During the Second World War, nearly twenty thousand European Jewish refugees fled to the open port of Shanghai. In the last two decades, Shanghai survivors memoirs have attracted attention from both historians and general readers in the West.[3] In Austria and Israel, as well as among Shanghai survivors, the story of Chinese consul general He Fengshan in Vienna is generally well known. He allegedly issued life-saving visas to Austrian Jews fleeing Nazi persecution to China. In 2000, Yad Vashem, Israels Holocaust Martyrs and Heroes Remembrance Authority, named He Fengshan Righteous among the Nations. Although the unique Jewish experience in the Chinese city was another reason for the considerable attention paid to Shanghai history of late, scholarly treatments of this episode in modern Jewish and East Asian history are still scarce.[4] A few scholars have explored the social, political, and diplomatic histories surrounding the arrival of the European Jewish refugees in Shanghai during the era of World War Two.[5] However, these historians have yet to produce detailed studies of German policies of forced Jewish emigration, German-Chinese and German-Japanese diplomacy in the late 1930s, the relations between Central European refugees and the established local Sephardi and Russian Jewish communities in Shanghai, and the cultural life of the refugees in their wartime sanctuary.
Wartime Shanghai and the Jewish Refugees from Central Europe succeeds in illuminating these subjects, and deepens our understanding of not only how the Central European Jews left Nazi territory for Shanghai but also how they kept their unique cultural identity in an alien land. Eber makes an important and welcome contribution to the existing scholarship on the city of Shanghai and the Asian repercussions of the Holocaust.

Eber's agenda in this slender volume is ambitious. Although she does not attempt to construct a comprehensive history of Shanghais refugee community, she aims to establish the context within which both arrival and survival in Shanghai were possible. At the same time, she attempts to demonstrate the kinds of strategies that could be pursued within the context of Shanghai to ensure cultural identities (p. 4). The theme of cultural identity and community pervades her study. The Jews who came to Shanghai both before and during the Second World War were a diverse lot, and Eber points out that although we might be tempted to refer to them as a Jewish community, the fact is that Shanghais Jews were a polyglot population consisting of several culturally and linguistically different communities (p. 1).

One of the most important aims of Eber's book is to understand the Central European refugees within the Shanghai setting (p. 1). When the Jewish refugees arrived in Shanghai in the summer of 1938, China and Japan were engaged in the Second Sino-Japanese War. A year earlier in October 1937, the Japanese drove the Chinese Nationalists out of Shanghai. Japan eventually became a major power controlling the city along with twelve Western countries. The books first chapter outlines the treaty ports history, its emergence as an international metropolis and the opportunities it offered to both Chinese and foreigners. In Shanghai, foreign communities, including the two Jewish communities, Sephardi and Ashkenazi, were able to maintain their identities as distinct groups within the treaty port setting (p. 37). Eber traces the development of Shanghai not only as a modern, commercial city but also as a city of immigrants and refugees (p. 7).

The books second chapter examines Germanys relationship with China and Japan in the late 1930s and its expulsion of large numbers of Jews.
Ebers emphasis on the important role that Germanys economic interests in East Asia played in the transformation of its policy from one supporting China toward one of alliance with Japan makes an important contribution to our understanding of German-Chinese and German-Japanese relations during this period. Further, while most studies of the Shanghai Jews have focused on the refugees life in exile in China, Ebers examination, in this chapter and chapter 3, of the German policy of forced emigration provides the most comprehensive account to date of Nazi policies and decisions of Central European Jews that led to their flight to Shanghai.

Eber also considers in chapter 2 the issue of possible immigration destinations in Asia for European Jews. Specifically, she explores the Jewish settlement plans in Chinas Yunnan Province proposed by Sun Fo (Sun Ke), Sun Yat-sens only son, and the German Jewish banker Jacob Berglas. In addition to contemporary newspaper articles and English-language documents housed in the archives of various Jewish organizations, Eber cites Chinese scholars Bi Chunfu and Ma Chendus work A Plan to Settle Jewish Refugees in China, which was translated into English and published in the West in 1995. Two years earlier, Bi and Ma, archivists at the Second Historical Archives of China in Nanjing, for the first time published this collection of five documents from the Nationalist government related to the Sun Ke Plan to settle Jewish refugees in China. These documents from the Chinese government have since been widely cited by Western scholars. They are some of the few records on the Jewish refugee issue to be found in mainland Chinese archives and might very well be duplicates of Nationalist records left behind when Chiang Kai-shek and his followers fled to Taiwan. Yet other Chinese language sources concerning the Shanghai Jews are also available to scholars. Ebers book might have profited by consulting them as well. Specifically, in 2002, Shao Minghuang, director of the Archives of the Chinese Nationalist Party in Taipei, edited a collection of eighteen documents from the Central Executive Council and the Highest National Defense Council concerning the Nationalist governments plan to accommodate the Jews.[6] Although these documents provide invaluable new perspectives on the subject, they have been largely ignored by scholars. Further, the Academia Historica, the National Archives of Taiwan, holds important documents from the Nationalist governments Executive Yuan and Foreign Ministry concerning both the Sun Ke and Berglass settlement plans. Related Foreign Ministrys records are housed at the archives of the Institute of Modern History in Academia Sinica, the most prominent academic institution of the sciences and humanities in Taiwan.[7] Had she consulted these sources, Eber might have been able to convincingly dispel some common misconceptions about the Nationalist government and the Shanghai Jews. The Chinese authorities absence in Shanghai has led former refugees as well as scholars to conclude that the Chinese government failed to actively address the Jewish refugee issue. These documents demonstrate that the Nationalist government, which retreated to Chongqing, not only formulated a carefully considered Jewish policy but was also deeply involved with the European Jewish refugees. This appreciation would have strengthened Ebers analysis of the Shanghai setting of her study. After all, this is a story that unfolded in wartime China.

Eber's third chapter explores the Jewish refugees journey from Europe to Shanghai and the permit system designed in late 1939 to limit and prevent the further influx of Jews to the city. Eber stresses the important roles that the Japanese occupation authorities and the Shanghai Municipal Council played in creating the permit system.
However, she neglects to point out that the Japanese, who were reluctant to ban the coming of the Jews because of their potential value in winning Western, especially American, support for the Japanese war effort, were under tremendous pressure from the established Jewish community to stem the flow of refugees into their city. Documents from the Shanghai Municipal Archives and the Japanese Foreign Ministry make clear that because of the shortage of relief funds and the increasing number of refugees, the leaders of the Shanghai Jewish community feared the financial burden that supporting their destitute coreligionists would impose on them.[8]

The final three chapters of Wartime Shanghai illuminate the cultural and institutional life of the refugees in the city and, after February 1943, in the so-called Shanghai Ghetto. In these chapters, Ebers talents as a gifted social and cultural historian of Jewish life in China are clear. She again demonstrates her skill in exploiting multi-archival sources in a number of languages and adds welcome new detail to our understanding of important but long-neglected aspects of Jewish refugee life in Shanghai. She adroitly depicts the arrival in the city of Central European Jewish thespians and entertainers who founded Yiddish- and German-language theater companies and fed a growing appetite for Jewish-themed cabaret and variety entertainment.
She describes how refugees established the European Jewish Artist Society and a number of newspapers and literary magazines to serve an avid Jewish clientele in Shanghai. Eber underscores the combination of energy and anxiety that led the new refugees to build their own synagogues and fund burial societies, hospitals, and schools distinct from those of the older Baghdadi and Russian enclaves in the city. Her portrayal of the Jewish refugees artistic and educational endeavors and their efforts to build new institutions and negotiate boundaries with the established Jewish communities, the Chinese, and the Japanese occupiers presents a vibrant and humanizing portrait of the wartime Shanghai Jews.

The strengths of Eber's study are manifest, but the book does contain some small errors in its treatment of Chinese and Japanese names. For example, on page 22, Yangzipu should be rendered as Yangshupu. On page 43, in footnote 14, Song Qinglings name is incorrectly spelled Song Jinling. Again, on page 141, Wu Beifu should be Wu Peifu.
Occasionally, the author is inconsistent in the way she renders Japanese names. In some places, she gives them in the East Asian style, family name first followed by given name, but in some places she writes the given name first. But these are quibbles. Eber has written an accomplished and important study of wartime Shanghais Jewish communities that caps a long and fruitful career spent illuminating the contours of Sino-Jewish relations.

[8]. G. Godfrey Phillips to the chairman and the secretary-general of the Shanghai Municipal Council on Jewish Refugees, December 20, 1938, U001/4/2971, File No. K38/1, 02400245 (on reel 4 of the Shanghai Municipal Archives documents related to Jewish issues microfilmed and housed in the United States Holocaust Memorial Museum, Washington DC), Shanghai Municipal Archives, Shanghai, China; and Joint Report of the Investigation on the Jewish Issue in Shanghai, July 7, 1939, S-9460-3, Archives of the Japanese Ministry of Foreign Affairs, the Library of Congress, Washington DC.