As many know, the road to the Sino-Japanese War of 1937-1945 remains incompletely understood. While some 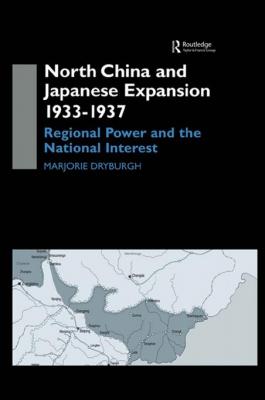 decisions made at the uppermost levels of government are reasonably clear, what happened 'on the spot' continues to depend upon supposition and inference. This is a critical omission, because the war that began in the summer of 1937 had as much to do with local activities as it did with national policies. Marjorie Dryburgh partially addresses this gap through an examination of the predicament of Song Zheyuan, commander of the Chinese Nationalist 29th Army in north China. Through a consideration of the shifting nature of the three-sided relationship between Song, the Nationalist Chinese government in Nanjing, and the Japanese, Dryburgh highlights the strained relationships that developed between these groups over the five years preceding the war. As such, the study is of great utility, providing a valuable contribution to our understanding of the immediate background of the Marco Polo Bridge incident.

According to Dryburgh, Song Zheyuan was a pragmatic patriot: ultimately loyal to Nanjing--and the concept of a single, unified China--but realistic enough to bend with certain Japanese pressures. As one might expect, these opposing perspectives later resulted in Song having conflicting reputations, but they also suggest that Song's dilemmas would be a useful means of exploring the relationship between region, nation, and a foreign aggressor. Not surprisingly, Dryburgh finds that Japanese pressure on Song between the east Chaha'er incident (January to February 1935) and the outbreak of war beginning with the Marco Polo Bridge incident (July 1937) weakened Song's relationship with the center, something that in turn weakened the national government's ability to lead China as a whole. Yet, somewhat surprisingly, this apparent rift was not because of any lingering warlord sentiments. Dryburgh insists that such differences arose over competing views of the national interest and that it was only Song's acceptance of the Guomindang's ability to determine correct policy that came into question. Thus, "the Sino-Japanese conflict became 'regionalized'" by Song Zheyuan (p. 2), requiring Nanjing to somehow re-nationalize it.

The key events that caused Song Zheyuan to distance himself from Nanjing's leadership were several, and seemingly had a cumulative effect. Initially, the nature of the Tanggu cease-fire agreement of May 1933 (the "Tanggu order" to Dryburgh) seems to have encouraged Song to negotiate his own solutions to continued Japanese demands rather than wait for orders from Nanjing. This became apparent in the spring of 1935 when Japanese compelled Song's 29th to move out of Chaha'er and into Hebei. Nanjing had apparently considered a military response, but Song negotiated a withdrawal on his own, something that supposedly so demoralized Jiang Jieshi that in anticipation of losing the north he ordered the construction of defenses on the south bank of the Yellow River (p. 47). Later in the summer, Song further distanced himself from Nanjing by removing the political advisors sent from Nanjing to his army, thereby eliminating the organizational linkages between the 29th and the center.

Having negotiated with the Japanese once, however, Song could not avoid further entanglements with the Japanese in their attempt to foster a 'north China autonomy movement' for north China's five provinces in the fall of 1935. Citing failures in Nanjing's ability to govern north China, the movement attempted to incite popular support for a more federal (and looser) structure for China. Dryburgh notes that in doing so, the Japanese considered Song to be an integral part of a new order in the north, but at the same time Nanjing continued to rely upon Song to avoid becoming enmeshed in Japanese activities, leaving Song in a difficult spot. Song eventually allowed himself to enter negotiations with the Japanese, but pulled out when it appeared that a Japanese-created puppet organization (the East Hebei Anti-Communist Autonomous Council) would have too much power in a more autonomous Hebei. Thus, while Song successfully navigated a perilous course between rival demands for his political commitment, it was still at the cost of further raising Nanjing's fears.

The following year, 1936, witnessed simultaneous Japanese and Chinese efforts to pin down Song's loyalty--a gauntlet Song could only survive if he remained noncommittal to both. Song therefore conceded to some of the milder Japanese demands while avoiding committing himself to those that would require greater submission, all the while proclaiming loyalty to Nanjing. Yet despite those protestations of faithfulness, Song declared himself to be strictly neutral with regard to the major challenges to Guomindang leadership. These included the Guangdong-Guangxi revolt of June 1936 and the Japanese attempt to create an independent Inner Mongolia in nearby Suiyuan in the fall.

Song Zheyuan had no similar room to maneuver in 1937, as both Nanjing and the Japanese were running out of patience in dealing with him. At the same time, however, they were also running out of patience in dealing with each other. In the end, it was Song and Nanjing who proved able to patch up some of their misunderstandings. Dryburgh suggests the biggest problem standing between the two parties was merely the uncertainty regarding the other's ultimate intentions (pp. 156-7). Discussions to clarify those intentions, coupled with Japanese attacks on Beiping (Beijing) in late July, seem to have brought the two together to resist the Japanese more forcefully (p. 160).

Dryburgh's investigation of these tangled affairs is stimulating. She is absolutely correct that previous studies explain Nanjing's relationship with Japan insufficiently, focusing as they do on domestic politics and international affairs (pp. 18-9).[1] An analysis of the politics within the Nationalist military is long overdue. Dryburgh's approach, however, suffers from two methodological weaknesses. First, in her effort to move away from the earlier regional studies of the warlord and Nanjing eras in Chinese history, Dryburgh does not sufficiently explore Song's position as a regional figure.[2] Despite his national stature and perceptions, Song was still a regional leader, dependent upon a local power base that he was sorry to lose after war pushed him out (p. 161). The fact that the 29th was largely made up of former members of Feng Yuxiang's Northwest Army underscores this point (p. 8). Missing this element renders Dryburgh's conclusions considerably less nuanced than they could have been.

A similar weakness concerns the Japanese leg of this "triangle" (my term, not Dryburgh's). Despite her acknowledgement that Japanese approaches to dealing with China eventually "converged" (p. 212)--meaning that at one point they differed--Dryburgh tends to lump all Japanese together, portraying them simply as insatiable with regard to their desire for Chinese soil. Were she to have considered the various kinds of Japanese pressures, she would have written a longer--and undoubtedly more complicated--analysis, but one that might have been more intellectually satisfying.[3] Complexity is necessary to understand some matters, and the outbreak of hostilities at and after the Marco Polo Bridge incident is one of them.

In addition to these methodological concerns are certain practical omissions. The paucity of maps makes it difficult to follow the actions that Dryburgh relates. A chronology would also help. Another lapse involves the chaos of the era itself. Since there is so much to consider, Dryburgh's analysis assumes a familiarity with people, wider events, and other historical perspectives.[4] This is not a book for the average student.

Finally, an observation. Dryburgh argues that Japanese pressure divided Chinese, rather than providing a focus for Chinese to rally together, and that these new divisions weakened Nanjing's authority (pp. 1-2, 208-11). In the first part of her analysis, this position is confirmed. However, towards the end of her analysis, the opposite seems to be affirmed--that is to say, the Japanese threat in July 1937 towards Beiping helped bring Song and the Guomindang together, eventually resulting in enhancing the role of Jiang Jieshi as the nation's leader. In the public's eye (and no doubt their own), neither could survive the loss of the former capital to a Japanese puppet state. It seems that here regional issues became irrevocably nationalized, making Song's relationship with Nanjing a more secondary affair.

[3]. Intriguingly, Dryburgh's bibliography includes several works that consider Japanese activities outside of those of the Guandong (Kwantung) Army, along with a half-dozen sources in Japanese, indicating an ability to read that language as well.

[4]. On the Chinese side, in addition to Parks Coble, Facing Japan and Sun Youli, China and the Origins of the Pacific War, it would behoove the reader to be acquainted with Lloyd Eastman, The Abortive Revolution: China under Nationalist Rule, 1927-1937, Cambridge, Mass.: Harvard University Press, 1974. Most helpful on the Japanese side would be James B. Crowley, Japan's Quest for Autonomy, Princeton: Princeton University Press, 1966, James William Morely, ed., The China Quagmire: Japan's Expansion on the Asian Continent, 1933-1941, New York: Columbia University Press, 1983, and Alvin Coox, "The Kwantung Army Dimension," in Peter Duus, Ramon H. Myers, and Mark R. Peattie, eds., Japan's Informal Empire in China, 1895-1937, Princeton: Princeton University Press, 1989, pp. 395-428.