The film asks a key question: What is the image Americans portray to the world?
June 2, 2014
Print 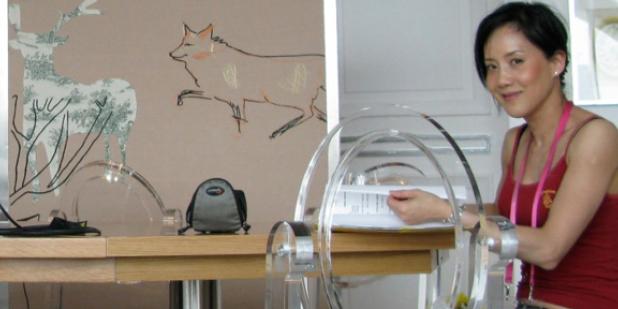 Originally published in USC News on June 2, 2014 by Allison Engel.

In 1964, Mina Chow’s immigrant parents, newly engaged, took photos of each other standing in front of the Unisphere at the New York World’s Fair. The photos documented their search for a new identity as American citizens, according to Chow, a licensed architect, filmmaker and lecturer at the USC School of Architecture. The pictures also reflected the importance of architecture and national image at World’s Fairs.

Years later, Chow, who speaks Mandarin, was excited to visit the 2010 Shanghai World Expo, the first World’s Fair in China. Traveling with a tiny film crew — including USC School of Cinematic Arts professor Norman Hollyn and Edward Lifson, who teaches at USC Architecture and the USC Annenberg School for Communication and Journalism — she planned to interview architects and officials at various national pavilions.

She had hoped to see the best of American design at the U.S. pavilion. But America’s pavilion turned out to be uninspired and dull, plastered with corporate logos. It was roundly disparaged in media accounts and represented a very public failure seen by a record 73 million people who attended the expo. To Chow, it was emblematic of a country that no longer considered its architectural contributions at World’s Fairs to be important.

“I was appalled. I couldn’t believe it,” Chow said. “How could my own country that inspired my parents to start their new lives here, and inspired me to become an architect, let me down? Did my own country not believe in what I do for a profession? It hurt. How did this happen and why?”

Thus was born the seeds of a documentary, Face of a Nation. Its logline: “A quest for national identity and vision for our future, in which a first generation Chinese-American architect asks why we no longer care about World’s Fairs when once they captured our hopes for the American dream.

Chow is the film’s executive producer, and USC Cinematic Art’s Mitchell Block, who teaches independent film producing and has handled distribution and marketing for hundreds of films, is the producer. They started with $40,000, mostly supplied by grants from USC-related entities, including the Fund for Innovative Teaching, the USC Architectural Guild, the USC U.S.-China Institute and the USC Ambassador’s Fund.

Since returning from the World Expo with initial footage, the two applied for dozens of grants, and in the highly competitive world of documentary funding, have been quite successful. In mid-May, an arts and architecture foundation, the Graham Foundation of Chicago, added a grant of $10,000. An American venture capitalist living in Shanghai pledged $45,000 two weeks ago, bringing the cash total of contributions to $200,880 — enough to lock down a rough version of the 97-minute film.

It will cost an additional $100,000 to completely finish the film, Chow estimated, but the team hopes to attract a television network with the rough version and get money to finish from the broadcast rights. The plan also is to take Face of a Nation to festivals to publicize the documentary.

“The film asks what is the image Americans portray to the world,” Chow said. “We’ve stopped participating in one of the biggest soft power exercises there is.”

Politicians promoting small government did not allow any taxpayer dollars to be used for the American pavilion in Shanghai, she noted. Opponents against investing in groundbreaking architecture argued that the Internet and Hollywood movies can broadcast American innovation and image around the globe.

The film includes Chow family home movies, using her parents’ respect for American national images as a way to reflect the larger story. “It’s disguising a political story in a personal one,” she said.

Chow, who teaches an architectural professional practice course and an interdisciplinary building science design studio, this year also has been busy with a second cinema project: directing and producing 100 Years of Architecture, a 15-minute film for the school’s centennial. It will premiere June 4 at the USC Architectural Guild’s annual dinner.

Nation Branding at the Shanghai Expo