Craughwell, The Rise and Fall of the Second Largest Empire in History: How Genghis Khan's Mongols Almost Conquered the World, 2010

As one might gather from the title of Thomas J. Craughwell's book on the Mongol Empire, it is intended for the general public. Indeed, from a scholarly perspective there is little to recommend--there are no new interpretations of events or analysis. While the sources are fairly up to date, the author relies on equal parts popular works as to scholarly books. Also, the book has numerous errors. So why is it being reviewed? Other than the fact that I was asked to review it, the book must be judged for its merits. Furthermore, it is a book such as this that first awakened my interest (and I suspect others') in the Mongol Empire, and for that reason alone it should receive some attention.

The book is organized in sixteen chapters. The first eleven deal with the life and conquest of Chinggis Khan. Craughwell uses the "G-word," or Genghis Khan. I assume he makes this choice because the popular audience might be more familiar with this name or rather title and would become confused with the more proper Chinggis Khan. Why the publishing industry perpetuates this is beyond me: how many famous Mongolians do they think the American public knows? The second half of the book discusses the reign of Ogodei, Guyuk, and Mongke, using many of the now standard tropes for chapters, such as the title of chapter 13, "How One Man's Death Saved Europe from Destruction." The final two chapters then focus on Kublai Khan and Mongol rule in China, with little to no attention given to the rest of the Mongol Empire after 1260. The book itself is lavishly illustrated using artwork from the period as well as latter woodcuts, lithographs, and old maps. Thus it is colorful and eye-catching. Readers will be drawn to it for this reason. It also has useful sidebars that provide information on tangential aspects of the empire, such as the role of shaman.

Unfortunately, the book is, as stated earlier, rife with errors. Indeed, because of the lack of footnotes, it is difficult to 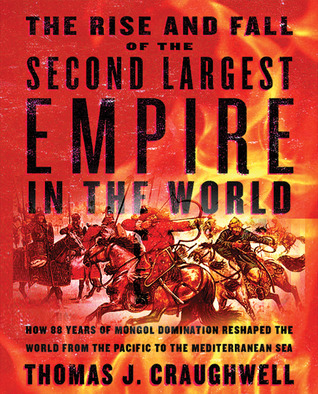 determine from where the author derived his errors--did he misread the sources, come to his own conclusions, or simply repeat another's error? Part of the problem arises from the attempt to summarize a complicated series of events while also focusing on a few key figures. For instance, the author discusses the conflict between Chinggis Khan and his blood-brother and rival, Jamukha. In Craughwell's book this conflict is continual, but he neglects to include that after 1201, Jamukha was only a bit player in the affairs of Mongolia and the conflict was between Chinggis Khan and more powerful polities (pp. 75-77).

Other more factual errors also occur. He has Senggum, a Kereit prince, dying in the Gobi Desert instead of in the kingdom of Xixia (p. 80). Craughwell also indicates that Ogodei was selected heir because Chaghadai and Jochi (all were sons of Chinggis Khan) quarreled after Chinggis Khan died in 1227. Although it is true that gdei was chosen due to the quarrelling of Jochi and Chaghadai, the problem is that Jochi died before Chinggis Khan did (probably in 1225) and that Ogodei was named the successor as early as 1219. Another factual error is that Craughwell has Chinggis Khan stopping at his capital of Karakorum, although the city was built during the later reign of Ogodei (p. 158).

Craughwell's interpretations of events are also a bit disconcerting. In discussing the Mongol invasions of Georgia, he mentions that the initial invasion by Subotai in 1220 not only was undertaken as part of the pursuit of the Kharazmian Shah and as a reconnaissance, but was also done to gather intelligence for an invasion of Europe (p.167). While the Mongols certainly did gather intelligence, this was standard operating procedure. Although this may seem a minor issue, Craughwell's assertion gives the impression that the Mongols intended to invade Europe as early in 1220. There is no indication of this anywhere in the documentary sources or from an evaluation of Mongol actions. Furthermore, intelligence gathered in Georgia had very little practical use in Hungary or Poland (both targets of the Mongol invasion twenty years later).

So, what value does the book have? As I mentioned, the illustrations alone make the book worth a perusal. My criticisms come from being a specialist on the Mongol Empire, but for a sixteen-year-old or a casual reader, it is unlikely to alter their perception of the Mongols. Craughwell writes well enough and is likely to engage the interest of a reader so that they then read a book or two listed in his bibliography. And then, perhaps when the high school student is in college he or she will take a course on the Mongols or if that person is an adult, perhaps they will read a more scholarly work.

Thus, while I would never assign the book to a class, for a person who has an interest in the Mongol Empire, this book will suffice as an introduction as it is well written, nicely illustrated, and has the general flow of events correct even though some of the facts and interpretations are misleading on close inspection.