Coggins, Power, Politics and State Formation in the Twentieth Century - the Dynamics of Recognition (January 1, 2014)

Bridget Coggins' book was reviewed by Ryan Griffiths for H-Diplo and is published here under Creative Commons license.
January 26, 2015
Print

Bridget Coggins’s new book, Power Politics and State Formation in the Twentieth Century: The Dynamics of Recognition, is a detailed study of sovereign state birth. Despite the fact that states play a central role in global affairs and serve as the basic unit of analysis in the field of 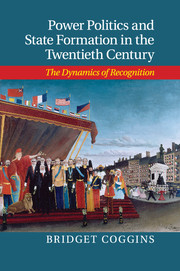 international relations, there is a dearth of research on this topic and there are many questions surrounding the process of state emergence. For example, how do aspiring nations become sovereign states? Is the process of obtaining sovereignty purely a domestic affair, or is there a role for the international community? What factors separate the success cases from the failures? Coggins targets this gap in our understanding and tests a number of theories drawn from the social sciences. She uses a standard mixed-methods approach that begins with an original data set on independence movements that existed between 1931 and 2000. These data permit her to examine the subject at a high level of generality, looking at why some movements succeed when others fail. She then zooms in to investigate a set of movements in the former Yugoslavia and Soviet Union. In all, this is a great study and an important contribution to the literature.

Coggins’s core argument is that sovereignty depends on the recognition given by other states. It is not enough to merely declare that you are a state and even behave like one. True sovereignty depends on the acceptance of others. Without that acceptance, nations like Somaliland are condemned to an unfortunate status wherein the full benefits of sovereignty are denied them. In making this argument Coggins critiques what is called the declaratory model of statehood, which holds that sovereignty follows from domestic control and legitimate authority. She contends that contemporary sovereignty requires both more and less than this. It requires more because domestic-level characteristics are insufficient on their own; a polity is not a full member of the international community until recognition is given. It requires less because the factors guiding recognition have less to do with domestic characteristics than they do with international politics, despite what many think, and recognition is often given to states that lack complete domestic control and legitimacy. Here, Coggins clearly supports what is called the constitutive model of statehood.

What then are the factors that determine when states will grant sovereign recognition to breakaway regions in other countries? Coggins maintains that governments are usually motivated by parochial concerns such as whether the recognition of a foreign independence movement will encourage domestic secessionists. It is for this reason that states like China are reluctant to bestow recognition in the absence of government consent, since violating the sovereignty of another government can set a precedent for secessionists at home, like the Uighur. In addition to these precedent-setting concerns, states are also motivated by simple diplomatic factors. Recognizing an independence movement in another country can endanger relations with the local government and even risk war. Such concerns will of course be influenced by whether the government in question is an ally or an adversary.

Coggins sees the dynamics of state emergence as a highly social process. She uses metaphors of club membership and likens the practice of state recognition to that of joining a fraternity or sorority. Admission to the club depends on the collective decisions of the existing members. Here, she rightly identifies the importance of the great powers, pointing out that they play a pivotal role in swaying international opinion. She uses a threshold model and argues that the international environment incentivizes leaders to coordinate their decisions with an eye on maintaining system security, ensuring a critical mass of support for new states, and collectivizing the decision. With few exceptions, new states emerge when the great powers agree that recognition is appropriate. In the absence of that agreement, the status quo usually wins and statehood is denied.

All of this matters for a number of reasons. First, the process of state emergence can be bloody and the demand for independence is a common cause of civil war. Policies aimed at limiting such conflicts would benefit from a deeper understanding of the politics of recognition. If Coggins is correct, then the factors that drive external recognition need to be paid greater attention. Second, this constitutive process of state recognition works to ensure short-term stability since it is ultimately more concerned with parochial concerns and international politics than the long-term fitness of the new state. In other words, the current practices surrounding state emergence run the risk of admitting weak and failing states and denying potentially strong states. Third, given these factors, it is vital that the comparative work in political science as well as international law be integrated with research emphasizing the importance of the international system.

This is a highly convincing book and the potential criticism is rather minor. I thought the positioning of the argument was perhaps a bit safe. Coggins spends a fair amount of time fleshing out the debate between the declaratory and constitutive models of statehood. This is an interesting theoretical discussion that generates a number of thought-provoking questions. For example, do sovereign states precede (and create) the system of states, or did the process of mutual recognition that undergirds the system create the constituent states? These are fascinating questions to speculate upon, but from an international relations perspective it seems obvious that the community of states matters. The declaratory model--the notion that sovereignty is simply given to fully functioning states, and, laterally, that those states create the system--seems oddly outdated, a notion better suited for political theory, and one that is ill-suited as a practical guide for contemporary international relations. In that sense, Coggins’s argument on this matter is both a strength and a weakness. She is clearly right, but that seemed clear from the beginning.

A second point pertains to her argument about the role of the great powers. She rightly identifies their importance, but analysis of the mechanisms through which they utilize their power could have been more developed. For example, I would like to have seen more on the role of the United Nations Security Council. After all, the hallmark of sovereign recognition is a full seat at the United Nations, a status that separates de facto states like Nagorno Karabakh, Somaliland, Palestine, and even Kosovo, from the de jure states that have full access to the economic and political benefits of sovereignty. The gateway to full membership is the Security Council, particularly the veto-wielding permanent members (China, the United States, France, Russia, and the United Kingdom). These five appear to play a crucial role, constituting a special committee where recognition is concerned, and as such their voices would seem to carry far more weight than other great powers like Germany and Japan. What are the dynamics of the Security Council? At what point do aspiring nations tender their application for sovereignty and how do they do so? Presumably, there is a pre-application selection process where secessionists detect preferences and court these crucial governments. This seems like a neglected but vital part of the dynamics of state emergence, and one that fits within Coggins’s larger story.

A lesser critique has to do with the role of the state. Coggins is correct that international recognition matters, but the conservative and status quo bias of the international community raises the importance of the individual state from which any given independence movement is attempting to secede. Since governments are usually so keen to respect the sovereignty of other states, and thereby create a system of quid pro quo, each state is effectively given an informal veto over their own secessionist movements. Although this home state veto is at times overridden, as it was when many governments recognized Kosovar independence in the face of Serbian objections, it nevertheless constitutes what is arguably the chief barrier to recognition. Theoretically, Coggins’s analysis begins after the home state has made a decision. But the collective judgment of the international community matters most when the home state denies independence, because governments rarely withhold recognition once the home state veto is removed. Therefore, the factors that shape how states respond to their own movements is critical. Indeed, in most of the successful movements that Coggins identifies, the home state permitted independence and international recognition naturally followed. Of course, one could point out that there is a dynamic process at work here and that home state recognition is informed and pressured by the international community, as it often is, but these relationships could be more clearly explicated. However, given the scope conditions of a book like this, it is understandable that this element of the larger story is downplayed.

Overall, this is an engaging and indispensable book on the topic of state emergence, one that skilfully combines quantitative and qualitative methods. The data set alone advances our ability to understand the process of secession. The core argument is persuasive, well researched, and sure to acquire a high level of acceptance in the field.