China's economy is partly driven by an extensive and international recycling trade. Historian Josh Goldstein shares the results of his most recent research trip to China. 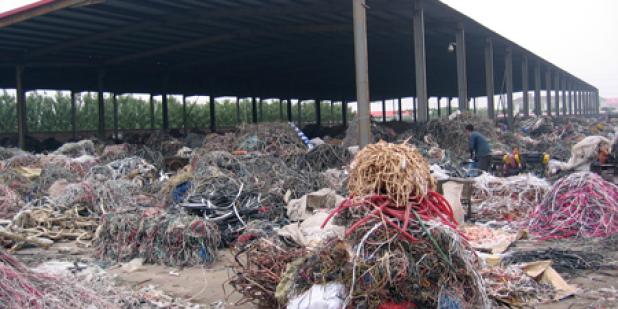 Over the last several years I have been investigating China’s enormous and informal economic sector of post-consumer recycling. Throughout China several millions of people survive through collecting recyclables, either picking through urban landfills and trashcans or plying the streets as itinerant scrap collectors. In Beijing alone over 300,000 people make their livings this way, almost all of them rural migrants from poor villages.  This huge sector of informal employment is not just an obvious indicator of China’s increasingly gaping economic disparities and rural/urban divide; nor is the scrap sector merely a crucial industrial input in a resource-poor national economy; scrap has also become a vital business of global proportions.

China has grown into an unrivaled colossus in global scrap commodities markets, with the country’s seemingly insatiable demand for raw materials reshaping market logics for almost every conceivable waste commodity. Over the last decade: international copper prices have risen and stabilized at 3 times previous levels, while those for aluminum alloy have nearly doubled; notoriously volatile waste-paper markets have stabilized and risen steadily, driving hundreds of small U.S. paper mills out of business; and international trade in waste-plastics has quadrupled to over US $5 billion with China’s share rising from 10 to 45% of world imports. These unprecedented market transformations are all due to Chinese demand.

One final bit of statistical data: in 2004 the United States exported $3.1 billion in scrap to China, making scrap the US’s biggest dollar value export to China, outstripping airplane parts and electronics.  Or to put it more plainly: we import a huge amount of our manufactured goods from China, while our highest value export to them is our trash.

Taicang Recyclable Resources Industrial Park (TRRIP):
Located in Taicang county, about 90 minutes outside of Shanghai, TRRIP hosts about 20 businesses, all of them registered as foreign companies.  Most of these companies are Japanese-Chininese joint ventures, but by far the biggest industry in the Taicang zone, occupying about 1/3 of the zone’s land, is Nine Dragons Paper Co Ltd, the famous Hong Kong company founded by a woman who began as an itinerant waste-paper picker whose story has been covered in The Economist and Wall Street Journal.

Most remarkable about TRRIP was the business acumen of its master-planner.  He and his friends bought rights over the zone’s 10 square kilometers of land very cheaply in the early 1990s, then sold plots in 2003 at a much higher price, and are now selling the remaining plots at 3 times the 2004 price.  In other words, TRRIP has been an extremely successful real-estate investment for this local entrepreneur.  Indeed, he admits that aside from selling the properties, his company does no environmental oversight or management whatsoever, and I learned nothing in my time in Taicang that pointed to any form of extraordinary environmental oversight The only regulatory distinctions for TRRIP are that 1) foreign-owned businesses in TRRIP can import forms of scrap that are seen as “waste” and therefore not permitted in other areas; and 2) TRRIP industries receive tax breaks for the first decade.

All TRRIP firms are, at least on paper, foreign-owned and hire mostly migrant labor.  Thus the main interaction between TRRIP and local residents has been the mass relocation of the area’s farmers. TRRIP, together with the local government, has provided compensation in the form of comfortable 2-story row houses and monthly income subsidies that the locals complain are too low.  Their general opinion of TRRIP: their community is being polluted by importing foreign trash, and they are not benefiting or being appropriately compensated.

Ziya Recyclable Resources Industrial Park (ZRRIP):
TRRIP is miniscule compared to Ziya, an industrial zone in Tianjin's Jinghai district.  ZRRIP is almost exclusively devoted to metal scrap processing, and aside from one or two aluminum scrap sorting businesses, the fifty-plus other businesses in the official zone are all devoted to one activity: wire-stripping. In other ways ZRRIP and TRRIP are very similar: both only accept foreign companies; the real-estate deals involved were comparable; and the size of the zones are approximately the same, around 10 square kms. These are the formal boundaries. Ziya, however, is located in the middle of a vast expanse of unregulated waste processing. Essentially an area of 3 townships, or a several tens of square kilometers and hundreds of businesses are devoted to processing imported waste. Indeed, they are devoted to one very specific industry: stripping the plastic coatings off of hundreds of millions of tons of imported copper wire.

This is a wire-stripping enterprise located outside of Ziya's formal recycling industrial area. Here the common practice is to burn the plastic casings on fine wires, a practice that is strictly prohibited within the formal recycling zone.

The stripping of imported waste wire is the specialty of the Ziya area, and has been since the 1980s. Plastic casings are then trucked just over the border to plastic recycling plants in Wen’an district, Hebei; copper stays in Ziya for reuse in dozens of small local copper foundries. All these industries are highly polluting, but the most polluting aspect of this waste-wire reuse is the practice of burning the plastic off of thin gauge wire that is too fine to allow for stripping.  The grounds of unregulated yards are black with the soot from these toxic fires.

ZRRIP is more closely managed than TRRIP.  There is a main office that coordinates and oversees the zone, and ZRRIP managers are diligent about preventing businesses inside their gates from burning wire casings. This is the sole, though important, benefit that the ZRRIP has brought to the Ziya area. In almost every other way, the businesses within and outside of ZRRIP’s gates are the same: they import electronic (wire) scrap, and hire hundreds of migrant peasant day-laborers to strip that wire. According to these day-laborers, all the businesses in the area, whether within or outside ZRRIP, pay similar piece rates based on weight and gauge of wire.

In sum, both Taicang and Ziya are marketing themselves abroad and in China as “green” environmentally progressive industrial zones, but in both cases local residents are not impressed.  Ziya is in many ways a more complex and interesting situation, as ZRRIP was built after the area already had a thriving scrap processing sector; and there is a real, albeit small, environmental difference between businesses inside and outside the formal zone.  In all cases, real-estate developers and business owners are making sizeable profits off scrap processing, while the labor force is almost entirely migrant peasant farmers who are paid extremely low wages (about $2-5 US per day) and have no job security. True, this cash income is far more than these migrants would realize at home on the farm; but in the global scheme of this trade, it is the extremely low wage that makes shipping millions of tons of waste across the ocean each year profitable to all business parties; and the environmental costs, certainly in Ziya, are severe.

Joshua Goldstein is an associate professor of history. He published Drama Kings, on the remaking of Peking Opera, earlier this year.