Lee Lai To's China and the South China Sea Dialogues is a very useful book for those interested in China's policies toward the ASEAN (Association of Southeast Asian Nations) countries. Focusing on China's discussions with these countries regarding the South China Sea disputes generally, and the dispute over the Spratly Islands in particular, Lee analyzes China's policy on these disputes as well as how these disputes fit into China's overall relations with the ASEAN countries.

The organization of the book is rather straightforward. The first two chapters are introductory. Chapter one lays out the strategic context of the Asia-Pacific region generally and Southeast Asia specifically. Chapter two reviews some of the primary reasons for China's desire to assert its territorial claims in the South China Sea, and also provides an overview of the development of Sino-ASEAN relations in the 1980s. The next three chapters are the meat of the book. Chapter three examines China's discussions with its Southeast Asian neighbors regarding the South China Sea issues in formal multilateral settings, such as the ASEAN Regional Forum (the ARF) and China-ASEAN meetings. Chapter four examines the dialogues in informal multilateral settings (e.g., the Indonesian-sponsored workshop series on "Managing Potential Conflicts in the South China Sea"). Chapter five considers China's bilateral discussions with the other claimants (Vietnam, the Philippines, Malaysia, Brunei, Taiwan, and Indonesia). While all three chapters rely heavily on news reportage as well as on official communiques and reports from the meetings, chapter four is the strongest analytically because Lee draws on his personal experiences as a participant in the workshops to bring greater analytical depth and authority to his examination of the informal dialogues. The same is true of his discussion of the Sino-Philippine and Sino-Malaysian bilateral discussions versus 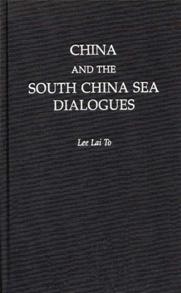 Lee's analysis provides a number of significant insights on China's policy toward the South China Sea and Spratly disputes. First, while confirming China's well-understood emphasis on discussing the issues bilaterally with the various claimants (thereby giving the Chinese an advantage based on size and power), Lee demonstrates that Beijing did not rule out the possibility of multilateral discussions, and has even come (albeit somewhat grudgingly) to accept these so long as they are held in the ASEAN context. The Chinese even agreed to putting the South China Sea issue onto the formal agenda of the 1997 China-ASEAN Senior Officials Meeting, moving away from their previous insistence that this issue could only be discussed informally. Second, Lee notes that China does not want the Spratly Islands/South China Sea dispute to disrupt its efforts to further develop good, cooperative relations with the ASEAN countries. Toward this end, one of the major purposes of the dialogues (from China's perspective) is "to defuse the so-called China threat" (p. 162). Third, as the emerging regional power, China wants to keep other major powers such as the U.S. and Japan out of the issue. Thus, China is also using the various dialogues to dampen the interest of some ASEAN states to "lean on extraregional powers," thereby hampering American or Japanese "interference" in the issue (pp. 145-46).

Despite these insights and the comprehensive nature of this book by drawing on all three sets of dialogues, this reviewer wishes that Lee had pushed his analysis further in a few places. First, the conclusions to chapters three and five are essentially one paragraph summaries of the analysis in the chapter. While helpful, more could have been said. For chapter three, Lee could have elaborated on the fact that there was a degree of evolution in China's comfort level regarding discussions of the South China Sea and the Spratlys in formal multilateral fora. (In fairness, this observation is discussed in the introductory section of chapter four, but it is not clear why it is missing from the conclusion to the previous chapter.) For chapter five, more could have been done to draw out the similarities and differences across the bilateral relationships, such as the differences between China's relations with the Philippines and with Malaysia over the Spratlys dispute.

Second, while this book focuses on the dialogues between China and the other claimant states over the South China Sea disputes, more could have been said about how China's actions to build structures on Mischief Reef in late 1994 (discovered in early 1995) related to Chinese efforts to alleviate suspicions of their intentions in the area through the bilateral and multilateral dialogue processes. Lee provides some explanations for the Chinese action in terms of Sino-Philippine relations (pp. 103-06), but he does not address how this aggressive move served Chinese interests in the formal or informal multilateral dialogues that Beijing was using to alleviate fears of the "China threat." Finally, at two places (pp. 68, 78-79) Lee refers to "internal differences" in the Chinese government over their policies toward the South China Sea hindering progress on cooperative joint development projects, but he does not explain what these differences are or between which elements of the government these differences exist. Without a citation to the source of this information, the reader is left hanging.

Despite these weaknesses, China and the South China Sea Dialogues provides a valuable contribution to our understanding of Chinese foreign policy toward Southeast Asia in the 1990s as well as its participation in multilateral fora. Lee's book should become required reading for anyone seeking to understand the potential for a peaceful resolution to the Spratly Islands dispute.