Chen, Comparative Study of Child Soldiering on the Myanmar-China Border (2014)

Kai Chen's book was reviewed by Jane Ferguson for H-Asia and is published here under Creative Commons license.
July 27, 2015
Print

This slim volume presents a crucial humanitarian issue in Myanmar’s ongoing internal conflict: the use of underage soldiers both in the 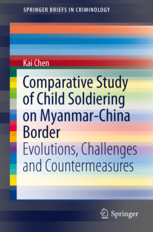 Tatmadaw (the government forces) and in the separatist ethnic nationality militias. In the introduction, Kai Chen suggests that the continued use of child soldiers in Myanmar’s conflict presents a serious humanitarian issue that needs to be considered particularly in relation to the country’s economic relationship with China. Where the book stands to make its greatest contribution is in its emphasis on the area of the Myanmar-China border; due to nongovernmental organization (NGO) locations and researcher access, many previous reports on the issue of child soldiers in the conflict in Myanmar have focused on militias near the Thai-Myanmar border.

The ninety-seven-page volume is divided into nine chapters, a number of which could be stand-alone essays in their own right. Although the book is listed as a social sciences/political science work, it reads more like an NGO policy paper. Furthermore, the lion’s share of its sources are UN and NGO reports on the issue, rather than new research or interviews. Chen does outline some of the obstacles he faced when conducting research on this sensitive and problem-ridden issue, but he is clear about what perspectives he is drawing from: English-language sources, academic articles and working papers, surveys and NGO papers, UN reports, and Myanmar-specific news networks.

Although derived exclusively from English-language secondary sources, the book does take a nuanced approach to looking at the roots of the child-soldier phenomenon in Myanmar and is complex in its ways of suggesting potential ways to ameliorate the problem. Chen rightly points out that young people have been used in combat for millennia, but not until relatively recently has international legislation been drafted to protect children who are vulnerable to war. He discusses the range of reasons that children become soldiers in general, and in Myanmar in particular, in terms of those who join and those who are forcefully recruited into both the Tatmadaw and the ethnic nationality armies. Chen discusses the various roles that child soldiers occupy within these forces. The book looks at the problem of decommissioning child soldiers, noting that it is difficult to ascertain the details of the situation for many, as they often lack birth records or bureaucratic paper trails to establish age or identity, and also the psychological trauma of war often means these children are ill-prepared for civilian occupations.

While very much sympathetic to an author who is likely working in a second language, one could not help but notice that many of the sections are very dense, and the prose contains awkward phrasings and typographical errors that were not edited properly, including the use of the word “venerable” instead of “vulnerable” (p. 6). Overall, however, this volume could serve as an introduction to the literature on child soldiering in Myanmar. It does not offer a thorough overview or history of the conflict itself but does adequately situate the phenomenon for students of international relations or policy studies, or for anyone one interested in an overview of the issue facing Myanmar.