Chandler, Establishing a Pure Land on Earth: The Foguang Buddhist Perspective on Modernization and Globalization, 2004.

Given a title such as Establishing A Pure Land on Earth, one may well be inclined to expect a discussion centered on Foguang's perspectives on 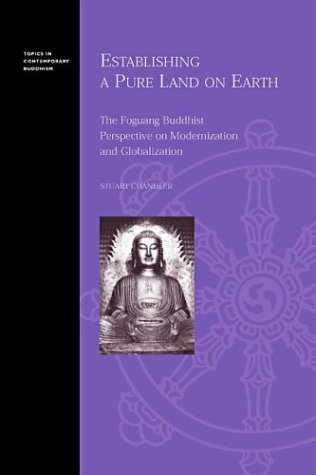 modernization or on globalization. Although these issues are certainly addressed, this book involves a more comprehensive description of this large Buddhist organization, its founder, Master Xingyun, and some of the strategies that it has used to achieve the prominent position that it holds in Taiwan, as well as to expand its international network. The author, Stuart Chandler, has been remarkably successful in providing a compelling description of a Chinese Buddhist organization that has self-consciously embraced modernity and globalization.

Reading Establishing a Pure Land on Earth brings to mind Holmes Welch's work on Buddhism in China in the first half of the twentieth century (The Practice of Chinese Buddhism: 1900-1950. Cambridge: Harvard University Press, 1967). Indeed, Chandler cites Welch often and relies on him almost exclusively in his analysis of Xingyun's innovations. Like Welch, who dealt with organizational structures of Buddhist institutions, Chandler describes the structure of Foguangshan organization, touching on key issues such as financial support and the dynamics of interaction between lay followers and monastics. While this sort of description is a valuable contribution, Chandler also follows Welch in focusing not on individuals, but on descriptions of the organization, its development and the challenges that it has encountered. The only sustained description of any person involved in the organization is that of Xingyun. Here, however, biographical data is given only as background to his symbolic role as master, and to point out the direction he has given, as founder and leader, to the development of Foguangshan. This lack of treatment of individuals is a weak point in the book.

The opening two chapters lay out a general description of the physical environment of Foguang headquarters in southern Taiwan, located near the major industrial city of Kao-hsiung (chapter 1), and provide background on Xingyun's role as Foguang's patriarch (chapter 2). Chandler weaves his general description of Foguang Headquarters and Xingyun with a good explanation of the function and aspirations of the organization, illustrating their array of activities and their general philosophical orientation of Humanistic Buddhism. A pivotal event in Chandler's narrative appears to be the decision in 1997 to "cloister" the monastery, at which time the monastery ceased presenting itself as a tourist site and stopped allowing unscheduled visits by the general public and lay followers. Despite the fact that a major section of chapter 1 is devoted to the event, and it continues to be brought up throughout the book, Chandler confusingly claims that the event had no long-term effect on the organization (p. 23).

The "cloistering" sets the stage for a theme that runs throughout the book. Chandler describes Xingyun and the Foguang organization as self-consciously trying to take advantage of the current social and technological environment through such activities as setting up a Foguang satellite television channel (p. 185), running an orphanage (pp. 12-13) and establishing a secular university (pp. 131-134). While Foguang's adaptive style and willingness to embrace new avenues for spreading the dharma has resulted in some success, it has nonetheless opened Xingyun and the organization to criticism and created financial strains. The dilemma that Chandler depicts Xingyun and the organization to be continually struggling with, is how far they can go pursuing progressive activities before the organization alienates its constituency and becomes nonviable.

Chapters 3 and 4 pick up on this theme by dealing with Xingyun's interpretation of "Humanistic Buddhism" (Renjian Fojiao) and how it translates into practice. The term, though not coined by Xingyun, is intended to distinguish his movement from the historical over-emphasis in Chinese Buddhism on the performance of funerary rites, instead accentuating the importance of active participation in human society. For the Foguang organization this translates into "establishing a pure land in the human realm" (p. 46), and leads to a focus on action in this world, akin to those labeled elsewhere as "Engaged Buddhism" (p. 78). Chandler describes Xingyun as a modernist in outlook whose modernization has concentrated on two areas: "the appropriation of new technology and the institutionalization and democratization of monastic life" (pp. 70-71). It appears that Xingyun's embrace of technology has created the most controversy, rather than his philosophical interpretation of Buddhism.

Subsequent chapters describe the innovations that have emerged from Xingyun's philosophical outlook: an educational system comprised of monastic and secular universities, and a variety of initiatives to improve lay education (chapter 5); lay and monastic vows and ceremonies (chapter 6), and the organizational structure of Foguangshan (chapter 7). In these chapters Chandler addresses some of the difficulties that have emerged from these. While Xingyun champions equality, his view of women as appropriately being homemakers, Chandler argues, is problematic (pp. 87-92). However, it has also led Xingyun to confer vows on Theravadin and Tibetan novice nuns (p. 86). Xingyun feels that capitalism is "the most effective socio-political ideology for actualizing 'true equity'" (p. 92), and "sees nothing wrong with making money and becoming rich" (p. 95), especially if it comes about by diligence as a form of cultivation. However, Xingyun's entrepreneurial spirit has led his detractors in Taiwan to accuse him of being principally concerned with wealth and prestige.

In chapter 7, however, Chandler shows that the apparent wealth of Foguangshan is somewhat illusory in character, as it is principally tied up in assets, leaving an extremely tight budget for operations. Chandler points out that while Foguang appears to be expanding, its base of support is at the same time being compromised because of the proliferation of competing Buddhist organizations in Taiwan. The large size of the organization has also demanded a heavy structure of rank and promotion which has led to some dissatisfaction among monastics, and a fairly high drop-out rate (pp. 206-207). Finally, Chandler also illustrates how Xingyun's involvement with politicians has led to his being labeled a "political monk" (pp. 21, 108), though Chandler is not clear about whether this label was originally applied by the media or members of the Buddhist community in Taiwan.

The concluding chapters of Establishing a Pure Land on Earth deal with the international aspect of the Foguang organization, the Buddha's Light International Association. Xingyun has been, by some measures, enormously successful, creating an international organization, with seventy-eight offices in twenty-seven countries. However, this international growth has not been without complications. These include resistance by local communities, legal difficulties in the United States arising from problematic political donations, lack of sustainability, and the difficulty of striking a balance between adaptation to the local circumstances and preservation of core traditions. This final subject is a particularly interesting one, and one that deserves greater attention than that provided by Chandler. The issue of how to maintain the organization as a representative of Chinese culture, while simultaneously attracting Westerners, is the type of dilemma being faced by an increasing number of Buddhist organizations seeking to expand beyond the boundaries of ethnicity. Chandler is clear that Foguang has not found a successful balance and continues to have trouble connecting with non-Chinese or achieving financial independence without the support of a Taiwanese lifeline.

It is in this last section that Chandler seems to run into some difficulties. Particularly troubling is his ready dismissal of Prebish's categories of "ethnic" and "elite" Buddhism. Although there may be a strong case to be made for refining these categories, or perhaps even replacing them, Chandler's label for what is practiced at the Foguang temple in Australia as "Chinese Australian Buddhism" or "Fair dinkum Buddhism" does not seem quite satisfactory as an alternative. Dispensing with a broader typology in order to accentuate the hybrid character of the practices does not help much in terms of addressing the differences or similarities between Foguang Buddhism as it is practiced in Australia and the United States or Canada. Can it really be said that "Fair dinkum Buddhism" is substantially different from the Buddhism practiced at the Hsi Lai Foguang monastery in California? On the other hand, by throwing out Prebish's typology (and not recognizing that there have been other models proposed) Chandler seems to be suggesting that we can only talk of Buddhism in the West in terms of particularities, such as Vietnamese Canadian Buddhism, American Thai Buddhism and French Cambodian Buddhism.

One of the main underlying themes of the book is the attempt to elaborate difficulties that Xingyun has encountered in attempting to find a balance between the embrace of modernity and technology, while at the same time avoiding criticism from those who feel that his actions are inappropriate for a Buddhist monk. Chandler has done an excellent job in documenting the tensions that have arisen from Master Xingyun's attempts at making Chinese Buddhism relevant to contemporary life and turning Foguang into a global movement. The descriptive detail of a contemporary Chinese Buddhist organization that Chandler provides is a great contribution to this field. Chandler has an eye for detail which he use with great success in describing the various aspects of Foguang's operations and aspirations. Where Chandler has more trouble is in the conceptual framework he uses to deal with Foguang as a global organization. Nonetheless, Chandler's writing style and the description he provides is compelling and makes this book worthwhile for anyone interested in contemporary Chinese Buddhism.