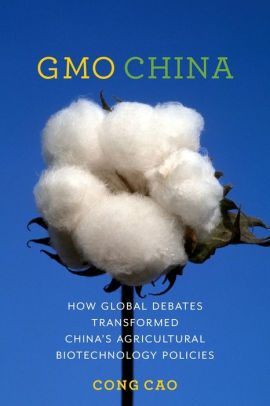 Cong Cao's book _GMO China_ is refreshing and enlightening. Unlike many authors in this genre, he knows essentials of his subject: biology, agriculture, politics, history. He is not a campaigner. Readers learn much about the historical evolution of China's developmental state, global connections of scientists, and the growing importance of global activists and narratives as influences on Chinese domestic policy. We learn why China became a world leader in some applications of agricultural biotechnology and pulled back from others. More important for general readers, China is the most interesting historical-longitudinal case in the global fissures on GMOs: biosafety, bioproperty, and biopolitics.

Purposeful developmental states around the world prioritize, steer, and monitor economic transformations with control of markets and investments, with variable success.[1]. China was the first country outside "the West" or "the developed world" to build significant capacity in state-led biotech institutions. The government pursued a "knowledge-based economic development strategy" in which its future in the global system was to be an "innovation-oriented nation." The state specifically sought "to become a global leader in biotechnology" (p. 39). The priority in agriculture was to reduce crippling pesticide pollution, improve farmer incomes, and eventually reduce food dependency by increasing local production. In the first two objectives, China largely succeeded with cotton, a notoriously heavy user of synthetic insecticides and destroyer of soils, and a critical input for industry. Food crops came later, with quite different consequences. That discontinuity in development strategy is Cao's puzzle.

State-led biotech development in China produced some transgenic plants--such as Bt cotton--that farmers found useful. (So useful, in fact, that the state lost control of the technology as well as the narrative.) Chinese farmers were the first in the world to grow (albeit illegally, the author notes) a genetically engineered crop--a virus-resistant tobacco, in 1988. This event presaged the real story of biotech often missing from academic treatments skimming the

surface: the off-stage, ground-up agency of farmers contrary to laws written in cities and enforced on paper. As in many countries, benefits of biotech crops to farmers drive illegal activity when official regulations or corporate property claims are onerous.[2] Illicit planting, sharing, and production of transgenic seeds are common globally. There is soft global law--the Cartagena Protocol--on international trade, but it has no eyes or ears in the villages, nor enforcement machinery; national governments have few incentives to report their failures, nor any real political interest in ferreting out illicit seeds. Moreover, widely assumed control mechanisms of national governments depend on will and capacity of the local state.

It is not easy to claw back a useful technology from farmers once they have used it.

China began development of its first successful GMO, Bt cotton, at the same time as India (early 1990s) and for the same reasons. Their trajectories radically diverged. India's public-sector efforts failed, although insect-resistant technology in Bt cotton succeeded through commercial firms and "cottage industry" underground seeds below the radar of Delhi and Monsanto. China's public-sector efforts succeeded, with similar effects on agriculture and the environment. Bt cotton is in both countries now widely used by cotton farmers; the Bt insecticidal protein has reduced alternative synthetic insecticide use against bollworms, improving farmer livelihoods and the environment. Despite deep systemic differences, both countries had trouble with regulation contrary to farmer interests.

With plant-breeding success, and wide farmer adoption and diffusion, one would predict rapid emergence of transgenic food crops in China. Indeed, by 2009 biosecurity certificates had been issued for Bt rice and phytase maize for pork production. Why neither crop is legally grown ten years later in China is a fascinating story of global influences and domestic political opening.

Cao explains that this transformation of politics began with gradual opening of the closed structures to pluralism in both state and society. Political scientists like to imagine a unitary state that signs treaties and enforces laws, especially in authoritarian systems. Experience shows otherwise. As in India, the state was divided structurally; Chinese ministries took positions that represented their clients' interests. Those aligned with public scientific institutions took a promotional stance on GMOs, those with an environmental mandate took a more precautionary line, whereas agriculture-allied sections of government promoted biotech. This positioning is congruent with both building support among constituents and fulfilling divergent mandates. Scientists seek new uses of new knowledge--and international recognition among peers. Ministries of environment stress unknown unknowns: complex ecological systems are poorly understood and demand caution. Moreover, uncertainties raised questions not easily answered in conventional time-limited test plots or animal feeding studies: there are always black swans.

Their mission selected for risk aversion. Agricultural agencies, in contrast, are tasked with enabling more production at less cost and improving famer sustainability. Farming is an industry stressed by intense competition, low margins, and natural threats to yields. Some risk is always incurred with new crops and techniques; biotechnology offered immediate and significant help in rapid plant breeding with novel traits.[3]

China established biosafety institutions in parallel to state-sponsored biotech development but did not resolve clearly who had final decision authority in the state. The book is terrific at explaining why none of us understand the Chinese system: it is opaque, underspecified internally, and situational. The author explains a great deal carefully, but mysteries remain: who has how much power when and over what? Like the EU system, there are multiple veto points, increasing the likelihood of stalemate.

As the Chinese political system opened up in the 2000s, risk politics of consumers gained over promotional policy for plant scientists and farmers. Greenpeace became a major player, as in many nations. Risk narratives were developed using international memes, reports, and social media. Conspiracy theories and scare stories spread; the author helpfully critiques the truth value of same with attention to evidence. A coterie of fringe scientists within China gave credence to alarmist scenarios. The government was then increasingly caught between agricultural interests and consumer skepticism and environmental activism. Simultaneously, international conditions changed. The U-turn in Europe on agricultural biotechnology in 1998-99--from promotional to restrictive--had powerful global effects. As in Europe, mobilization around potential future risk in China successfully competed against demonstrably real utility in the present.

Is GMO-derived food risky, as many Chinese consumers now believe? Global regulation varies widely, but as Cao points out, the science does not. He notes in chapter 1: "the scientific community unequivocally agrees that consuming approved GM foods is 'no riskier than consuming the same foods containing ingredients from crop plants modified by conventional plant improvement techniques'" (p. 8). Interpretation of uncertainty is of course subjective if hazards are not demonstrated or cannot be measured--that is, there is uncertainty in biotech plant breeding, but a probability distribution of actual hazards cannot be established--unlike certain persistent carcinogens in effluents.

If no GMO hazards can be confirmed, we are left only with uncertainty, not specifiable risk. Chapter 4 explains how this core dispositional question divides promotional, permissive, and precautionary policies. Is uncertainty in itself to be ruled a risk? Biosafety decisions thus turn on the burden of proof. As benefits to consumers of most existing biotech food are slim, any uncertainty at all can be constructed as unnecessarily risky. Risks to farmers from pests and low yields are real, but these real risks are invisible to urban consumers who have little idea how crops are grown.

Risk politics is strategically powerful precisely because there is no way to prove that any new--or old--technology is completely safe. The current global war against vaccines is illustrative. The lag in efficacy of risk politics in China relative to Europe, Africa, or India resulted from restricted freedom of action of citizens and inability of international network activists to work effectively with urban groups. National agricultural interests dominated historically, but with urbanization, transition out of a peasant subsistence economy, political opening, and growing opposition to GMOs, the state bifurcated. Environmental institutions constructed uncertainty as risk and urged precaution on the EU model. Agricultural agencies promoted permissive measures "focused on demonstrated rather than unknown risk ... and did not assume that uncertainty was itself a risk" (p. 80).

The answer to Cao's big puzzle is then: the Chinese state over time had to concede to more constituencies and interests in moving from fiber to food GMOs. Food safety proved especially fertile ground for risk politics; no one can determine how cautious is cautious enough. Empirically, popular sentiment in this field is fickle and poorly informed; esoteric terminology and diffuse anxiety limit popular understanding. Everyone of necessity then depends on some epistemic brokers in one information cocoon or the other: suicide seeds or silver bullets?

The global GMO debate foreshadowed contemporary tribal contestations over what can be meant by "evidence-based policy." This dilemma is exacerbated by a "post-truth" condition (Oxford Dictionaries' word of the year for 2016). Tom Nichols has written on the "death of expertise."[4] Populist politics of the "post-truth" era is evident in Cao's speculation that opposition to GMOs reflects "public antagonism toward scientists and the establishment" (p. 127). He thus illustrates how much is at stake in the global rift over biotechnology, comparable to rejection of science in climate change or vaccination: how is progress possible if there can be no agreement on the most basic questions of epistemology, method, and evidence?

However thorny, these dilemmas pale before the current round of biotechnical change. Cao often uses the term "transgenic" to refer to biotechnology, and rightly notes how difficult surveillance and control have been, even of comparatively simple alterations, even with a strong state. Bt cotton began with a single transgene. But the future in China and globally is ever more powerful transformations that are even less observable--with consequent leaps in both utility and risk. Transgenes can be detected, though not always easily, as with the rogue Bt genes in rice and cotton. Biosafety is possible with strong regulators and state commitment, or cowed farmers. Bioproperty claims can in theory be enforced--genes can be owned in some nations.

But in a section entitled "China's Policy, China's Dilemma," the author begins to specify the much more complicated future of "intertwined and multifaceted interests" (p. 194) on the horizon. Gene editing--often based on CRISPR--is, as its inventor, Jennifer Doudna, says, "like scar-less surgery."[5] Bioproperty and biosafety regulation would thus seem virtually impossible without telltale scars. It is difficult to imagine balancing across peoples and nations unprecedented gains in utility with essentially unknown, perhaps enormous, risks. This is Doudna's "crack in creation."

Gene editing significantly complicates the biopolitics of conventional transgenic plants, perhaps even the end of the "GMO" itself.[6] National policies diverge in whether or not to regulate its products as GMOs. Wide distribution of inexpensive tools and simple procedures democratize new genetic modifications; much development is outside the corporate sector, much underground. Gene editing has already made significant advances in medicine, and gene drives hold the potential to "hack evolution"--perhaps eliminating species humans find objectionable, such as the _Aedes aegypti_ mosquito (an invasive species in the Western Hemisphere) that can spread the dengue, chikungunya, Zika, Mayaro, and yellow fever viruses, or perhaps saving endangered or even extinct species. It was China that produced the first claim of editing human embryos to alter children with heritable traits (https://urldefense.proofpoint.com/v2/url?u=https-3A__www.nature.com_news_chinese-2Dscientists-2Dgenetically-2Dmodify-2Dhuman-2Dembryos-2D1.17378&d=DwIBaQ&c=clK7kQUTWtAVEOVIgvi0NU5BOUHhpN0H8p7CSfnc_gI&r=4hSrcxGRXV1f8TnXW9TCOA&m=d3egdXC1_2W6VfztmR1IQEu20eESvnCN2m9ab0M4G_0&s=kDmsMJXG2ainBe2IKEj2WHRRI_hYCwXXrH5muxjB6gk&e= ).

[4]. Thomas M. Nichols, _The Death of Expertise: The Campaign against Established Knowledge and Why it Matters_ (New York: Oxford University Press, 2017).