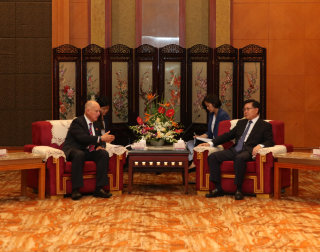 I. Acting in accordance with the principles of the Joint Communiqué on the Establishment of Diplomatic Relations between the United States of America and the People's Republic of China, as well as in accordance with the laws and regulations of both countries, both Parties agree to strengthen the friendly exchange and cooperation based on equality, mutual respect, mutual trust, and mutual benefit.
II. Both parties agree to maintain regular intergovernmental engagements through ongoing exchange of personnel, culture and ideas. Collaboration will be facilitated through the establishment of representative offices, which provide a platform for pursuing opportunities for collaboration and partnerships of mutual benefit, as well as the exchange of visits by government leaders through regular and effective communications on matters relating to the province/state relationship or of common interest.
III. Both Parties believe that Sichuan and California have complementary competitive advantages in the fields of information technology, bio-pharmaceuticals, clean energy, environmental protection, professional services, and international trade, and agree to promote and strengthen the cooperation in the above areas within the framework of the friendship province/state relations and establish a more sustainable cooperative economic relationship. Both Parties will promote business collaboration through:
1.Establishing a joint committee between lead chambers of commerce, to help facilitate and promote bilateral trade and investment activities;
2.Strengthening the cooperation in low carbon technologies, environmental protection and clean energy development through the establishment of the California-Sichuan Clean Energy Partnership;
3.Promoting cooperation between California and Sichuan on clean technology innovations and financing, through the establishment of the California-Sichuan Clean Tech Innovation Center in Chengdu Tianfu New Science City and participation in the development of the California-China Clean Technology Partnership Fund;
4.Utilizing the important role of private sector initiatives such as the California Center Chengdu;
5.Launching a Energy Internet Demonstrating Project in Sichuan with technical support from California.
IV. Both Parties agree that the existing cooperation in education, tourism, culture and public health is an important part of the friendly relationship between Sichuan and California. Both Parties agree to enhance the exchange and cooperation in the fields above so as to further promote mutual prosperity.
V. Both Parties agree to encourage people-to-people exchanges, which will help to facilitate greater community engagement and understanding by sports exchanges, education exchanges and youth leadership dialogues.
VI. This Agreement shall come into force from the date of signature. It will be valid for five years. Upon expiration, it may remain in force if neither side terminates it.
VII. This Agreement, signed June 4th, 2017 in Chengdu, Sichuan, is done in duplicate in the Chinese and English languages, both texts being equally authentic.
Edmund G. Brown, Jr.
Governor
The State of California
The United States of America
Yin Li
Governor
Sichuan Province
The People's Republic of China

Teng Biao grew up in a rural village before attending law school at Peking University and focusing on human rights. While his early successes were lauded by the Chinese government, he was later abducted and tortured by police. He fled to the United States with his family and now teaches at Hunter College in NYC.

Professor Margaret Lewis examined the US government's use of criminal prosecutions to address a broad "China" threat is at tension with the criminal justice system.

The USC U.S.-China Institute presents a webinar with David Zweig to look at how tensions between the United States and China have impacted scientific collaboration and research.