As an author who writes for both Taiwan and China, Lung Yingtai reveals how linguistic as well as ideological understanding and misunderstanding occur across the fences at UCLA. 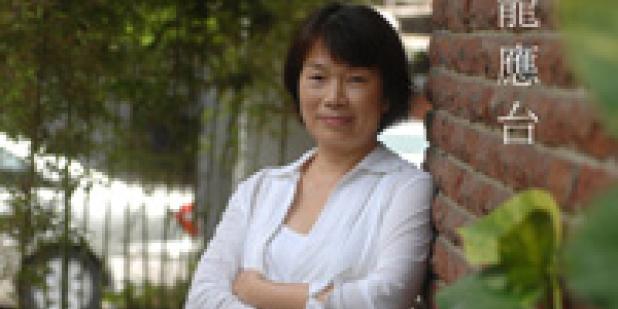 Separated by more than six decades of hostility and suspicion, estranged by poignant memories of the 1949 civil war, and divided by divergent social and political systems, China and Taiwan have also developed significant differences culturally. As an author who writes for both sides of the Straits, Lung Yingtai reveals how linguistic as well as ideological understanding and misunderstanding occur across the fences.

Lung Ying-tai is a celebrated writer, literary critic and public intellectual. She not only has a large number of devoted readers in her native Taiwan, but her works also have great influence in the Chinese-language world in Hong Kong, China, and North America. After receiving her doctorate in English Literature from Kansas State University, Lung Ying-tai taught in several universities, including City University of New York, Taiwan Central University, Tamkang University, and the University of Heidelberg. In 1999, she was appointed Minister of Culture of Taipei City and for three years she actively promoted Taiwanese culture and green environmental policies. After that, while living in Hong Kong, Lung was a visiting professor at the City University of Hong Kong and Hong Kong University. In July 2005, she established the Lung Ying-tai Cultural Foundation and went on to sponsor many academic lectures and literary and artistic activities. Since 2008 she has occupied the position of Hung Leung Hao Ling Distinguished Fellow in Humanities of Hong Kong University.

In 1985, Lung Ying-tai published her first collection of essays, entitled Wildfire, offering reflections and critiques of contemporary Taiwanese society. In twenty-one days, the book went through 24 printings and made such a startling impression on Taiwan society that the poet Yu Guangzhong described it as a "hurricane" ("longjuan feng," punning on Lung's surname). Since Wildfire, Lung has written some thirty books, including A Hundred Years' Reflections, Facing the Great Ocean, Bottoms up! Thomas Mann, and Seeing Them Off. Most of these works have also been published in China. In her many essays reflecting on the prospects for Taiwan society and the words and actions of political figures from the 1980s on, Lung Ying-tai has never wavered from her incisive style, penetrating analyses, and outspoken advocacy of reform. When depicting her parents' aging and death and her childrens maturation and departure from home, she has movingly portrayed feelings of longing and rational acceptance when "seeing off" loved ones.

Lung Ying-tai's most recent work is Big River, Big Sea: Untold Stories of 1949, published in September 2009 to coincide with the 60th anniversary of the founding of the People's Republic of China. In eighteen months it sold 400,000 copies in Taiwan and Hong Kong , a record-breaking number. With it, Professor Lung marks the anniversary in a different way--by writing a book dedicated to the pain and suffering of more than 10 million people who died in the Communist victory and millions of others whose lives were changed forever by it. In Chinese tradition, 60 years is an important number, and in Lung Ying-tai's view Beijing should not only celebrate the date but mark it. "Behind every successful general lie 10,000 corpses." There are no winners in a war, especially in a civil war. This book has been banned in China.

To that end, Big River, Big Sea is a work of history that "transcends nationality, transcends national borders, and straddles the Taiwan Strait." In it, Lung Ying-tai wants to let readers "see an entire generation of people who 'silently suffered enormous trauma' . . . crushed under the iron wheel of history." Western society is familiar with the tragic consequences of the Nazi army's siege of Leningrad during World War II. Few people are aware, however, of a similar tragedy that took place in 1948 in the northeastern city of Changchun, when Communist armies encircled Nationalist forces during the Civil War. Even the majority of Chinese are unaware of this event. Lung Ying-tai writes not only about that generation, but about "all those who were trampled upon, humiliated and destroyed in that historical epoch." Her moving account is based on innumerable historical materials and interviews with survivors of those times, and written in the hope that readers will confront "openly and honestly" the history of 1949 and enable the countless nameless souls who perished finally to "rest in peace in a manner that has genuine spiritual significance."