Woodcuts in Modern China, 1937-2008: Towards a Universal Pictorial Language

The China Institute Gallery in New York will host a exhibition to display woodcut pictures that have been produced in China over the last 70 years. 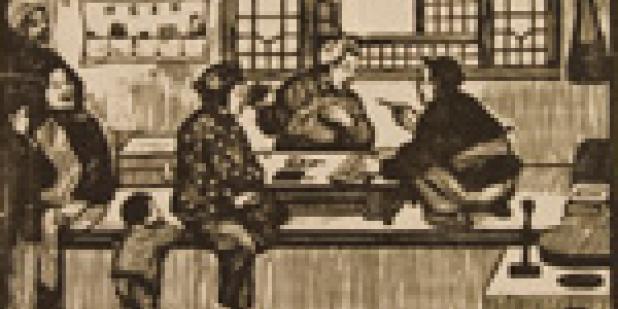 New York, NY – The first exhibition in the United States to present a comprehensive overview of the development of woodcut prints in China over the last 70 years will be on view at China Institute Gallery from September 16 through December 5, 2010.  WOODCUTS IN MODERN CHINA, 1937-2008: TOWARDS A UNIVERSAL PICTORIAL LANGUAGE surveys 68 woodcuts, ranging from formative early work, when artists in China first began experimenting with western-style techniques, to the work of important artists working today such as Xu Bing and Zhang Minjie.  An illustrated catalogue will accompany the exhibition.

Chronologically, the first section of the exhibition WOODCUTS IN MODERN CHINA, 1937-2008: TOWARDS A UNIVERSAL PICTORIAL LANGUAGE incorporates 34 works drawn from an important collection of over 200 woodcuts dating from 1937 to 1948.  Donated to the Picker Art Gallery at Colgate University by Theodore Herman, professor of geography emeritus, who acquired them from the artists in 1948, this collection is considered to be unparalleled in the United States.  “As historical documents, they offer a unique perspective on World War II…and especially on the civil war between the Nationalists and the Communists (1946-1949).  At the same time, the prints present the mastery of a new medium at a point when western techniques had been absorbed and transformed by Chinese artists…,” notes Leslie Eliet, who contributed an essay to the catalogue and has collaborated with Dr. Herman over the past 30 years.  The remaining 34 works are from 11 important contemporary artists who, after reviewing the Herman collection, selected works that “they felt expressed their reverence for the older masters, engaging them in a dialogue across time,” as Renee Covalucci, co-curator of the exhibition, writes in the catalogue.

Willow Hai Chang, director of China Institute Gallery, states, “Although woodcuts in China have a history of more than a thousand years, modern Chinese woodcuts, often inspired by political events, appeared only in the early 1930s.  This unique exhibition covers nearly the entire evolution of these new woodcuts in Chinese modern and contemporary art and shows their extraordinary importance in Chinese art history.”

Background
Providing an extraordinary view of China’s political and social turmoil during the past century, WOODCUTS IN MODERN CHINA, 1937-2008: TOWARDS A UNIVERSAL PICTORIAL LANGUAGE represents a new development in Chinese art, whereby art became a form of communication used to express a broad range of emotions.  The art also called attention to social and cultural inequities and led to the rise of the Chinese avant-garde.  “Modern woodcut artists attempted to awaken the general public to the rapidly unfolding and socially consequential events of the day, demanding of them a social engagement and action on a collective level…The artists adopted a style of social realism that combined both the evocative power and persuasive force of Expressionism with a realist depiction that could represent current social realities and issues,” explains Stephan J. Goldberg, associate professor of art history at Hamilton College, in his catalogue essay.  He notes that woodcut prints “bridged the traditional divide between the intellectual elite and larger population of urban ‘masses.’  It was a revolutionary new art form for the vast majority of the urban public whose primary exposure to visual art had hitherto been commercial advertisements in the form of calendar prints.”

Exhibition Highlights
A universal pictorial language is immediately evident in Li Hua’s After the Guard in Charge of Grain Has Gone (Victory), 1946 which depicts the Nationalist Army’s oppression of the peasants.  An elderly couple and a child react with despair as two soldiers leave their humble home with the family’s grain and a goat – their sole livelihood.

In 1930, China Institute sponsored the triumphant American tour of the iconic Peking Opera star Mei Lanfang.  Among his many roles was the legendary Chinese woman warrior Mu Guiying, on whom the Disney heroine Mulan was based.  Mu Guiying is immortalized in Song Guangxun’s woodcut Peking Opera Character, Mu Guiying, 1978.  An opera fan, Song Guangxun depicts her in full costume and makeup, and the bursts of bright colors seem to offer a celebration of the revival of the Opera after its hiatus during the Cultural Revolution.

In a more somber mood, Song Guangxun’s Brave Chinese Women (Portrait of Lu Xun), 1974, portrays one of China’s most important writers during the early twentieth century writing a protest article after the killing of one of his female students during the suppression of a student demonstration.

An internationally known contemporary artist, Xu Bing (b.1955) was one of the hundreds of thousands of young people who were sent into the countryside for reeducation during the Cultural Revolution (1966-76).  Emerging in a post-Mao era, his work is considered to have kept the avant-garde spirit of the modern woodcut movement alive.  In addition, the artist notes in an interview in the catalogue that his work is also closely “related to traditional Chinese culture.”  Xu Bing’s Wooden Fish, 1977-1979, depicts one of China’s most auspicious symbols: the words “fish” and “abundance” both have the same sound (yu) in Chinese.

Special Events and Programs
In fall 2010, China Institute will offer a series special programs to accompany WOODCUTS IN MODERN CHINA, 1937-2008: TOWARDS A UNIVERSAL PICTORIAL LANGUAGE.

On September 16 , Renee Covalucci, the co-curator of the exhibition, will deliver a public lecture entitled The Rising Tide of Change: Modern Woodcuts of China, discussing how Chinese artists used woodcuts to communicate visually, beyond national borders, to the rest of the world.

On September 28, Ralph Croizier, Professor Emeritus, University of Victoria, British Columbia, a distinguished scholar of post-Cultural Revolution art movements in China, will discuss the evolution of woodblock printing and peasant painting and their impact on contemporary Chinese art in a lecture entitled Folk Art, Revolutionary Politics, and Market Economics.

On October 26, November 2 and November 9, Ben Wang, Senior Lecturer at China Institute and a noted translator of Chinese poetry and drama, will offer a three-session course, Windows to a Culture: The Chinese Proverbs. The proverbs, mostly made of four Chinese characters, evolved from history and legends, as well as common social customs and folk sayings from regional cultures.

The series will conclude on November 16 with a lecture by Ben Wang and a performance of vignettes from the classical repertoire of the Peking Opera by New York City’s very own “Singing Delivery Man,” Yang Yu Bao, who was recently profiled in the Daily News.  China Institute has a long history of featuring premier cultural programs aimed at broadening the appreciation of this quintessential Chinese art form.

Founded in 1926 by a group of American and Chinese educators, China Institute in America is the oldest bicultural non-profit organization in the U.S. to focus exclusively on China.  The organization promotes the appreciation of Chinese heritage and provides the historical context for understanding contemporary China.  Programs, activities, courses and seminars are offered on the visual and performing arts, culture, history, music, philosophy, language and literature for the general public, children, and teachers, as well as for business.

China Institute Gallery, established in 1966, is distinct among the museums of New York City.  It was the first in the United States to showcase Chinese art exclusively on a regular basis.  Today, China Institute Gallery is New York's only non-commercial exhibition space solely dedicated to Chinese art and is known for its innovative thematic and scholarly exhibitions, publications and related art education programs.

All of the events start at 6:30 p.m.  More information on the special programs is available at: www.chinainstitute.org/artsculture/programs/exhibitionrelated