The Week that Changed the World: Nixon Goes to China and China in Today’s World

The USC U.S.-China Institute and the Richard Nixon Foundation and Nixon Center invite you to attend two panels focusing on the opening of China, and on what China's rise means for the world. 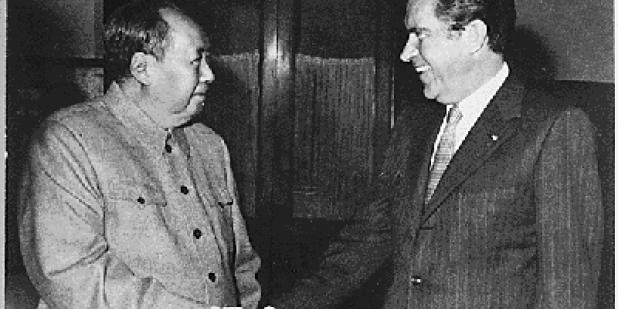 This USC U.S.-China Institute, Richard M. Nixon Foundation, and Nixon Center program is free and open to all, but seating is limited, so please rsvp early.

Part 1: The Inside Story of Richard Nixon’s 1972 Journey to China (Click here to watch the videos)

The first panel features eye-witness panelists discussing how that historic trip was planned and executed. It features three members of President Nixon's immediate Oval Office staff who worked with the President and Chinese leaders to manage the logistics and protocol of the trip and subsequently managed the February 1972 visit. The presentation will include segments from telephone calls made and behind the scenes video taken by participants in the trip.

The impact of Richard Nixon’s trip to Beijing was immediate. In the second hour of the program, scholars from USC and the Nixon and the Nixon Center in Washington will discuss China’s place in the world today, examining U.S.-China ties, global issues such as climate change, as well as China’s expanding role in the Middle East, and its relations with Asian neighbors.

Geoffrey Kemp directs Regional Strategic Programs at The Nixon Center. Kemp was Senior Director for Near East and South Asian Affairs on the National Security Council during the Reagan Administration. The Brooking Institution has just published his latest book, The East Moves West: India, China, and Asia's Growing Presence in the Middle East.

Daniel Lynch teaches international relations at USC and is currently writing on elite Chinese conceptions of China’s future. He’s the author of Rising China and Asian Democratization: Socialization to “Global Culture” in the Political Transformations of Thailand, China, and Taiwan and After the Propaganda State: Media, Politics, and “Thought Work” in Reformed China (both Stanford University Press).

Stanley Rosen teaches political science at USC and directs the East Asian Studies Center. He has written on a wide variety of topics from the Cultural Revolution to studies of Chinese education and youth culture as well as surveys of popular opinion. His most recent books include The Interplay Among Art, Politics and Commerce in Chinese Film (co-edited with Ying Zhu, Hong Kong) and State and Society in 21st century China: Crisis, Contention, and Legitimation (co-edited with Pete Gries, Rutledge Curzon).

Paul Saunders is Executive Director of The Nixon Center and publishes its bimonthly foreign policy magazine, The National Interest. He heads the Center’s U.S. - Russian Relations Program and works on other issues, including energy and climate change. Saunders was Senior Advisor to the Under Secretary of State for Global Affairs during the George W. Bush Administration.

Drew Thompson is Starr Senior Fellow at The Nixon Center and heads its China program. He was previously assistant director of the China studies program at the Center for Strategic and International Studies. Earlier he directed the China-MSD HIV/AIDS Partnership in Beijing and had an extensive business career in China. His articles have appeared in Foreign Policy, the Financial Times, and many other publications.

Click here for an interactive USC map. The Davidson Conference Center is in the northeast corner of campus, at the intersection of Jefferson Boulevard and Figueroa Street. Click here for directions.