USCI's look at "The Future of U.S. - China Relations" 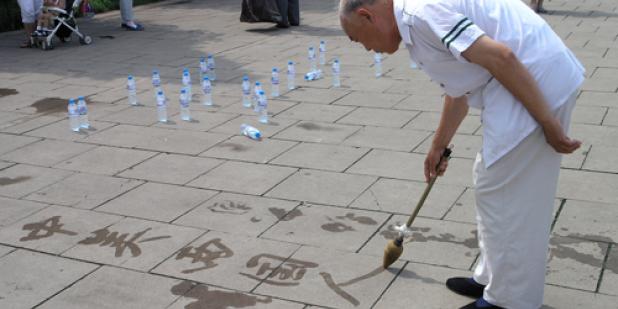 What does ’s rise mean for the ?

View photos of the event here and here.

View a video and summary of the event.

Topics:    State to State Relations in a Changing Economic Environment

The is the world’s lone superpower. is a rising great power. The relationship between the two will do much to shape the 21st century. Tomorrow and Saturday, USC’s new – China Institute hosts a penetrating and multidimensional look at – relations and at the massive changes in which are likely to affect that relationship. The conference is completely sold out, but media representatives are still welcome. Call 213-821-4382 to attend.

The outlines of ’s remarkable economic rise are well-known (from producing 1/20th of the world’s goods and services in 1980 to producing 1/6th of those goods and services in 2006). What is less understood is that growth continues at a rapid rate. will become the world’s top exporter in 2008 and is turning out not just textiles and toys, but computer equipment and cars. ’s automobile production passed the ’s in 2006. In part, American and other investors are driving this growth. Foreign direct investment in has risen from nil in 1983 to over $60 billion in 2006. And American consumers have done more than their share. In 2006, we imported $233 billion dollars more in goods and services than we exported to .

This economic success has helped accumulate the $1.2 trillion in foreign reserves, the most in the world. Some of these funds are now being invested in other countries. In 2006, Chinese firms purchased $11 billion in foreign assets. Of course, only Congressional outcry prevented a Chinese oil company, CNOOC, from purchasing El Segundo-based Unocal for $19 billion in 2005.

Enormous internal migration has enabled the staffing of factories and mines. Perhaps 200 million Chinese have left their village homes for the cities, the largest movement of people in world history. This has divided families and generated child care, education, health care, occupational safety, and many other challenges. ’s health care system was credited with amazing achievements in reducing infant mortality, controlling most infectious diseases, and increasing life expectancy. That system is now failing in many ways, just as ’s HIV/AIDS crisis deepens and number of elderly Chinese swells. In less than 10 years, will have 150 million people over 65. It is the first nation to “go gray before it goes green,” that is, the first nation to rapidly age before it becomes affluent.

Tremendous problems confront the Chinese. Corruption, underemployment, escalating energy needs, and environmental degradation are among these. To highlight two of these, ’s appetite of imported oil is growing (it’s already the second largest importer, after the ) and is on a pace to surpass the in 2009 as the largest producer of carbon dioxide emissions (the main gas linked to global warming).

Along with these massive economic and demographic changes, the expansion of telecommunications (more than 300 million Chinese have cell phones and at least 150 million Chinese are logging in to the internet) and greater openness has permitted people in with greater access to diverse news and entertainment. The government has sought to control the flow of information and the range of debate, through traditional coercive means and also using new technologies, including technologies supplied by American and other firms.

In an effort to increase its flexibility, the Communist Party-led state has experimented with reforms, including village-level elections. The leadership is sensitive to the widening social and economic disparities and has launched campaigns to “put people first,” to develop the relatively poor Western regions of and to build a “harmonious socialist society.”

To explore these changes and to debate what they mean for the – relations, the USC U.S. – China Institute has brought together more than twenty of the leading scholars and policy-makers working on . We anticipate a lively discussion and hope you can attend.

David Zweig ( of Science and Technology)