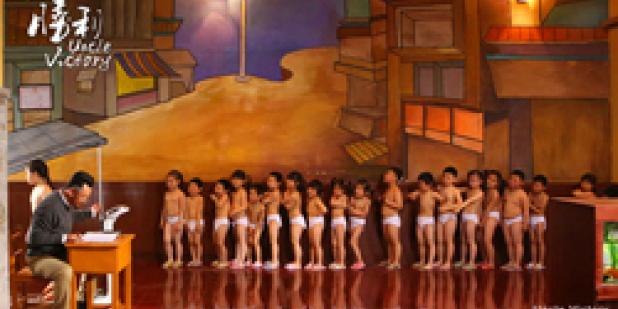 Uncle Victory occupies an original position in contemporary Chinese cinema. First, it’s always exhilarating to see a new talent confirmed, and Zhang Meng’s third feature upholds the promise of his previous film, festival darling The Piano in a Factory (2010). Returning to the rural settings, post-socialist empty lots and ruined factories of his native northeast, Zhang worked with a team of young Central Academy of Drama graduates, first-time producer Ren Su and screenwriter Liu Ya, to adapt the story of his uncle, a kindergarten owner who had gone to jail for 10 years for having crippled a man during an argument over money. Played with gusto by TV star Huang Haibo, Sheng Li is “a tough guy with a weakness for children,” released from prison into a country he no longer recognizes. He re-opens a kindergarten while settling old scores, and starting a complex romance with an equally tough young woman, Sun Xiaomen (Zhang Xinyi).

Second, while China has converted to digital media at a dazzling pace, Zhang Meng is the rare filmmaker who persists in shooting in 35mm to create the atmospheric texture he wants. Since Piano, he has teamed with a Director of Photography who shares his passion for shooting on film, Chou Shu, known in particular for his exquisite cinematography for artist Yang Fudong’s 35mm black-and-white films, and whose masterful camerawork turns the film into a visual poem, an elegy to the passing of time.

Third, despite receiving approval from the Film Bureau, Uncle Victory was subjected to a most unusual instance of censorship and unexpectedly barred from press and public screenings at the Shanghai International Film Festival, after Huang Haibo’s arrest for a sexual peccadillo became the rage on the Internet. Yet the producer was not allowed to withdraw the film, effectively denying it the prospect of being showcased at another major international film festival. Nonetheless, the seven members of the jury, presided by Gong Li, awarded it their Grand Prize. – Bérénice Reynaud

Preceded by:
What Happened in Past Dragon Year