Umbrellas and Sunflowers: Student Movements in Hong Kong and Taiwan

The UCLA Center for Chinese Studies presents three speakers who are experienced academic-activists with deep knowledge about Hong Kong, Taiwan and the two student movements for democracy that have galvanized international attention. 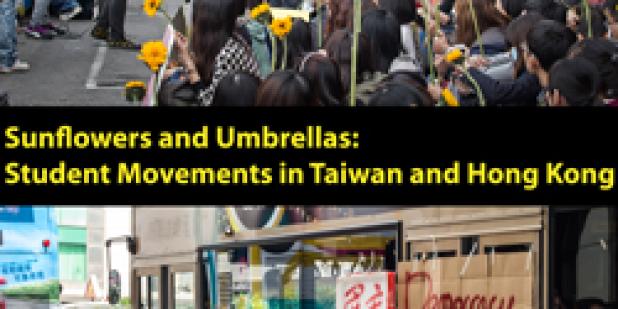 The three speakers on this panel are all experienced academic-activists with deep knowledge about Hong Kong, Taiwan and the two student movements for democracy that have galvanized international attention. They will provide the broad political economic backgrounds to the rise of these movements and analyze their internal dynamics, strategies and cultures.

Professor Ming Sing 成名
Ming SING's research interests include comparative study of democracy and democratization, political culture, civil society, quality of life, and Hong Kong politics. Currently, an associate professor at the Hong Kong University of Science and Technology, he obtained his D.Phil from Oxford University in Sociology and has been the author or editor of four books and over thirty articles. His refereed publications can be found in the Journal of Politics, Journal of Democracy, Democratization, Government and Opposition, Social Indicators Research, among others.He has also been an active commentator on Hong Kong politics, whose comments have been solicited by local and international media including BBC, CNN, Bloomberg, Financial Times, New York Times, International Herald Tribune, and Wall Street Journal. He was awarded the Fulbright scholarship for visiting the University of California, San Diego in 2007, and the POSCO Visiting Fellowship by the East-West Center, University of Hawaii in 2010.

Professor Yun Chung Chen 陈允中
Yun-chung CHEN was born in Malaysia. He was trained as a community planner (MPhil in Planning, Taiwan National University; Ph.D. in Urban Planning, UCLA). He is currently an associate professor in Cultural Studies at Lingnan University, Hong Kong. His research focuses on innovation studies and critical urban studies. As community planner, he actively participating in preservation and community building projects in Hong Kong, including preservation of Queen's Pier in 2007 and rebuilding of new Choi Yuen Village in 2010. As an activist, he has been strong opponent of privatization of public assets, slash-and-burn style urban renewal and top-down development projects that force evict its inhabitants. In the current student-led democracy movement that started in September 2014 – so called umbrella revolution – he sets up “mobile democracy classroom” at three major occupied streets where college teachers and activists provide democracy-themed classes for the students and protestors. For more information on "teachers in solidarity with student strike", go to facebook page: https://www.facebook.com/teachersupportstudentstrike.

Professor Hsin-Hsing Chen 陈信行
Hsin-Hsing CHEN received his PhD from Department of Science and Technology Studies, Rensselaer Polytechnic Institute. He teaches development theories and social movement at the Graduate Institute for Social Transformation Studies in Shih-Hsin University , Taiwan. Professor Chen was a leading organizer of Taiwan’s student movement in the 1990s and has been a keen observer and participant of Taiwan’s labor an student movements since then. He has published scholarly works on the politics of science and labor in the age of globalization. He also contributes regularly to one of the most influential online news sites in Taiwan, cool loud. Some of his reflections on Taiwan’s student movement can be found at http://www.coolloud.org.tw/node/61515.